Goldfish are a very common type of fish to own. They are much cheaper to care for than other types of fish. But they do require cleaning out more often to help with the oxygen levels and to avoid the water conditions becoming a poor condition, Especiallt if you have algae in your tank. So do goldfish eat algae?

If there is a build-up of algae within the tank, the likelihood of your goldfish eating it is very high. Goldfish are like most dogs, always searching for something to snack on. They tend to eat anything and everything that they can get their fins on. It is best to make sure that your tank isn’t completely covered in algae. In moderation, eating algae is not bad for them, but it certainly isn’t nutritious for them either.

NOTE : The best way to prevent algae build up in your aquarium is to install a UV filter (Available on Amazon) I also recommend you take a look at the following articles I wrote about removing algae from your tank.

Goldfish love to eat food, if there is something edible in front of them, they will want to eat it, and this will include green algae if it grows in their tank. There are many different species of algae, but brown and green algae are one of the most common to grow inside of a goldfish’s aquarium.

Green algae can be somewhat hard to clean off, but goldfish and other species of fish will happily nibble at algae.

Is Eating Algae Good or Bad For My Goldfish?

If your goldfish are eating the algae in your tank, you don’t need to worry about it not being suitable for them. It won’t cause any harm or kill it in moderation. Eating algae, however, is neither good nor bad for your goldfish. It does not bring them any benefits, but a little bit of algae won’t hurt either.

However, if you notice that algae growing has become a problem within your tank and your goldfish is taking in a considerable amount, it could become a potential problem. They need to eat the food supplied explicitly by you because goldfish food contains the nutrients that they need to eat on a daily habit.

If they overeat algae, they won’t be hungry, and likelihood is that they’ll stop eating the food that you are serving to them.

Can Goldfish Survive Just On Algae?

Goldfish can survive by just eating algae, But I would not recommend at all letting your goldfish only eat algae. They need specific nutrients which are only found within proper goldfish food.

Eating algae alongside their diet is okay, as long as it is in moderation and they aren’t filling themselves up on algae. Algae itself will not kill your goldfish; however, it can cause something else to occur, which will kill your goldfish. Goldfish need oxygen to survive; they get this from the cold water they live in. However, for algae to continuously grow, it requires taking in the oxygen from the water whilst releasing carbon dioxide.

Extracting oxygen from the water means that the oxygen levels will significantly drop, and if continued to drop it will eventually lead to the death of your goldfish.

As we’ve already established, goldfish love to eat and most often or not, they will eat everything that they possibly can. This means that they will definitely love having a snack on an algae wafer. Algae wafers have been designed to provide your goldfish with the necessary nutrients that they need to have a balanced diet. The algae wafers contain vegetables and protein; it is basically like a fish eating a protein bar.

Unfortunately, because goldfish are omnivores, which means that they will eat both plant and animal-based foods, there is always a possibility that they could potentially eat an algae eater. This is why you must know which are the suitable algae eaters to keep in a goldfish tank.

Goldfish tend to eat anything that fits in their mouths, so if you want to add an algae eater to your tank, you want it to be bigger than the goldfish but also a peaceful creature to make sure it won’t eat your goldfish.

What Will Eat Algae in a Goldfish Tank? There are plenty of different animals which will eat algae that are growing in your goldfish’s tank.

You can get algae-eating fish, snails, frogs, shrimps, etc. But before jumping to a decision, you need to ensure that they are safe to live alongside your goldfish because one could possibly eat the other and vice versa. You might regret your decision otherwise.

Why Does My Goldfish Tank Get Algae Build Up So Fast?

There are several reasons which can cause the growth of algae. We are here to explain why. Algae is a live plant, and like most plants do they require water, light and nutrients which is very easily found within a goldfish tank and exact reason why algae can grow frequently. However, most often or not, the rapid growth of algae is because of poor maintenance of the tank.

How to Get Rid of Algae in a Goldfish Tank? 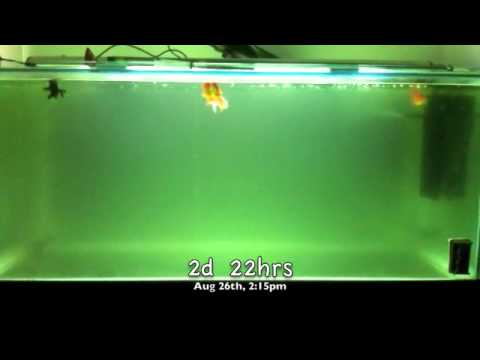 Getting rid of algae in your goldfish tank isn’t hard, but it can certainly take plenty of effort if it is frequently growing.

5 Algae Eating Fish That Can Be Kept With Goldfish

Algae-eating fish are one of the perfect ways to control the growth of algae within your goldfishes aquarium. They will happily nibble on the growing algae. But before you introduce a new type of fish into your tank with your current goldfish, you need to ensure that your goldfish is okay to live with this type of fish as sometimes other types of fish won’t get on well together with them. There are two types of the plecos species, which are the perfect algae-eating companion for your goldfish. These are the rubber-lipped plecos and longfin bristlenose plecos. Thankfully, both these types of plecos are very peaceful, and much to your goldfishes delight they will leave them alone and happily eat algae growing on any rocks and the tank’s surface space. Otocinclus catfish are excellent at cleaning algae off of plants, glass and any décor that you have inside of your aquarium. Perfect to house alongside goldfish as they don’t have a mean bone in their body, instead relatively peaceful and will happily leave your goldfish alone. They grow between one and a half to two inches long. Hillstream loaches are the perfect addition to your cold-water aquarium, and even better they do a fabulous job of scrubbing algae from the aquarium’s surface. They usually grow between two and three inches long. Nerite snails are one of the most powerful algae eaters and perfect for your goldfish tank. They will eat both types of algae, brown and green, which grow on the tank surface, decorations and any plants. You can have multiples of them in one tank without worrying about baby snails hatching as they can’t have babies in freshwater. They don’t require any supplements and will completely leave your goldfish alone. The perfect companion.