Have you ever wondered if you can you pet a koi fish? Can you touch a koi fish?

Is it ok to do? Will you harm them? Will they be scared of you?

Can You Pet Koi Fish?

Yes you can pet a koi fish as long as you pet them softly and slowly. Some Koi fish do like to be pet and also enjoy tummy rubs.

Koi are very intelligent social fish that enjoy being in schools and can even recognize the one who feeds them every day. As odd as it may sound, koi fish may come up to see you or to get a little pet now and again. How to Pet A Koi Fish Safely

Obviously, you can’t just pick a fish up and stroke it, like you could with a cat or dog. This doesn’t mean that you can’t pet your koi fish at all, it’s just going to be different.

You’ll need to start by building a friendship with your fish, and the best way to do that is to offer them food. When you’ve created a bond, the fish start will come to you. This is the best time to try physical contact.

When they come to the surface, try touching them. Be aware that a fish popping out of the water often isn’t for your entertainment, but it’s actually a signal of oxygen loss.

Continue this every time you feed them to build a routine. Your koi fish will come to recognize you when you come to feed them. Eventually, you will be able to stick your hand in the water for the koi to swim past and brush against your hands. 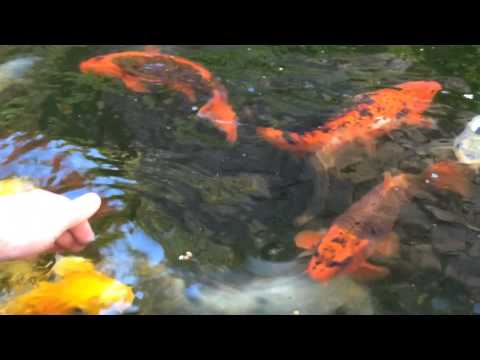 Do Koi Fish Recognize Their Owners?

Like most animals, koi will recognize whoever feeds them. As mentioned, they’ll associate you with eating, which is what they initially recognize.

Indeed, koi a will recognize who they are bonded with, meaning who takes care of them. This won’t happen immediately, of course. Remember that this recognition and eventual bond comes with trust. If your fish is stressed or scared, it won’t want to interact with you at all.

Koi fish are among the most intelligent fish and they are also very social. It’s common for them to play with each other, and in their own way, their owners as well.

As we’ve said, your fish will know you after you’ve spent time bonding with them through feeding and time spent with them. They don’t see the fine details of your face, but they do recognize your body shape and your voice.

Of all pond fish, koi are the friendliest with humans and are often likely to interact with them. Not only will they eat out of your hand, but they will let you touch them, and as we’ve said, may even come when you call.

A koi fish won’t be as friendly as a dog. It won’t jump up to give you a kiss, but they do tend to recognize their caregivers, and show their appreciation in their way, by letting you touch them and by being closer to you when they know you’re around.

Koi are more typically friendly with humans because they are well-adjusted to human contact. If your fish have been handfed, this increases that chance even more. It’s also important to note that a healthy fish is always a happier fish. Make sure to keep a clean pond for them, and they will thank you for it!

Can Koi Hear You Talk?

They may not understand, but your koi fish can definitely hear you talk. Further, it’s even been said that if you give your fish names, they will even come to you when you call.

Fish hear much differently than us. Their hearing involves the sound waves vibrating through the water. Truthfully, your fish can always hear you, but whether or not they like you enough to care is up to you.

When a fish, or any animal for that matter, relates you with food, then you cease to be a threat. This allows them to start trusting you. As we said, a koi fish that trusts you won’t only hear you when you talk, but it will positively react to the sound of your voice by coming to the top of the water to say hello.

Can You Touch Koi Fish?

We wouldn’t recommend anyone to stick their hand in a koi fish pond and try to pet them. Koi fish develop a routine in their feeding schedule and get to know the people who are feeding them. These are the people that we recommend who can pet a koi fish softly and slowly.

Koi fish are intelligent and social fish so they will not react poorly to being touched or rubbed softly by someone they recognize.

Those who are not accustomed to koi fish behavior and are interacting with them for the first time need to be careful. Koi fish have large mouths and they can bite you during feedings.

The bite is not going to create a significant amount of harm, but it can cause stress for you and other koi fish around who could feel threatened by this accidental act of aggression.

Koi fish get to know who their owner is after a time of being fed consistently. They may come up to the surface to say hello to them. Koi fish do not like to be pet by anybody and everybody. They may come up and be friendly with the person that they recognize.

Although the science is inconclusive, we believe that koi fish are great at being able to tell the faces and movements of their owners. Sometimes koi fish are able to react to being called by name, but we have never experienced that firsthand.

Koi fish can be considered docile and social at the same time. They can live in pairs or groups, but sometimes they get a little bit territorial when there are too many males in the pond.

Koi fish live comfortably with tankmates such as crayfish or large goldfish. They will not choose to eat a school of fish that are more comfortable when they are in larger numbers such as mollies are guppies.

If you have two couples of koi fish in your pond, they may not be so social. You might see the males competing with each other. One female may not be enough for the male and he may want both females to himself.

Adding more koi fish would reduce this type of behavior. It is common to see plenty of koi fish in large ponds getting along very comfortably in a docile state.

Be careful when petting someone else’s koi fish. It’s best to let the owner handle it themselves. If you would like to pet your own koi fish, you will have to routinely feed them and get to know them for a length of time