Fish such as grass carp, goldfish, tilapia, koi, are best at eating Duckweed when they come across one. Guppies, Bettas, corydoras, Otocinclus catfish, common carp, and several other fish will eat Duckweed.

Duckweed is one of the common aquatic plants you can find in slow-moving waters. They float and grow at the water’s surface or sometimes grow just beneath the surface of the water. They are small, free-floating aquatic plants that serve as sources of food for fish and several other organisms.

Duckweed belongs to the family Lemnaceae, one of the smallest groups of angiosperms. They are the smallest flowering plants ever known, growing in colonies on gentle waters. Duckweeds can grow in brackish waters and nutrient-rich freshwaters.

Duckweeds are popular for their aggressive growth in ponds. They tend to grow fast and occupy small spaces within a short period. Duckweeds are hardy and will tolerate a wide range of water conditions.

Duckweeds will also serve as food for various organisms ranging from snails to fish, ducks, birds, etc. They are highly rich in protein, making them a good meal choice for your fish and other organisms. They are full of vitamins and other essential nutrients for fish and other aquatic organisms.

Aside from the nutrients Duckweed provides to fish and other organisms, they are juicy and very difficult for fish to resist taste. If you have Duckweed in your tank, you should be ready for regular trimming of the plant unless you have heavy duckweed eaters in your tank. Duckweed can also beautify your tank and give your aquarium the feeling of natural habitat.

Many may not know about Duckweed, but you have to have enough knowledge about it as an aquarist. Duckweeds will help your fish’s habitat, so having them in your tank might not be a bad idea after all. You only have to take note of some conditions before you add them to your tank. 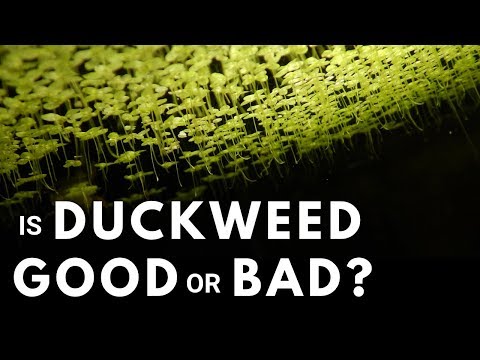 Goldfish are one of the numerous fish that eat Duckweeds. Some aquarists use them to control the population of Duckweed in their tank. Goldfish are heavy eaters of Duckweed and will eat them whenever they come across them.

Goldfish are also adorable and colorful fish for your tank. They will add to the beauty of your tank, control the population of Duckweed, and also ensure a controlled and sustained environment. Goldfish will eat Duckweed whenever they get the chance to do that.

Grass carp are one of the fish that look upon Duckweed as a source of food. Having grass carps in your tank might mean you cannot have Duckweed in your tank, as grass craps will do a great job cleaning the tank. Although these fish enjoy some plants more than duckweeds, they will still eat duckweeds when they get the chance.

The size of a grass carp can tell much about how well they will eat duckweeds. Smaller carps will eat a lesser amount of duckweeds, while larger ones will eat more of them. In general, grass carps will make a good meal from Duckweed.

Tilapia and duckweeds are compatible tankmates as Duckweed will provide dietary nutrients for tilapias. Tilapias will strongly feed on Duckweed until they can have the last of them in their tank. Duckweed is high in protein, making it enough for tilapias to feast on.

If you have Duckweed in the same tank as your koi, then you can be sure of having a preserved source of food for your fish. Koi fish love duckweeds and see them as one of their favorite sources of food. If you have a large supply of Duckweed in your tank, you can add koi fish to bring down the population drastically.

Corydoras also include one of the numerous Duckweed eating fish. If you do not have much food to give your fish, you can provide your cory with Duckweed, and they will be okay for a while. Duckweeds are also nutritious and tasty, giving your cory more reason to feed on them.

Many might get surprised to know Otocinclus catfish can eat duckweeds. Otos will eat Duckweed when they come across them. Like other fish, Duckweeds are highly nutritional for Otocinclus catfish and will ensure their good health.

Common carps are similar and in the same family as grass carps, with little difference. Common carps will eat duckweeds when they get the chance. They will also ensure to keep the tank clean of Duckweed.

Bettas, also known as Siamese fighting fish, will also find Duckweed tasty. They will eat Duckweed if you feed it to them. They will also ensure you get your tank cleaned of the plant.

Loaches will also feed on Duckweed. They can even make it one of a few diets and feed on them regularly. You can preserve your Duckweed for the consumption of your loaches.

Mollies are one of the duckweed lovers. They love to eat and will rid your tank of them as soon as they can. Rainbowfish are also one of the most aggressive eaters of Duckweed.

Barbs are a popular eater of Duckweed. Having barbs like rosy barbs in your tank can mean farewell to your Duckweed if you have one.

Duckweed is a fast-growing plant that can take over your tank. As they expand in size, they consume the oxygen in the tank, depriving your fish of it. Duckweed will kill the fish if there is no aeration in the tank.

Is Duckweed Bad for a Pond?

Duckweed is not bad for your pond until it becomes difficult to control. When the Duckweed grows beyond control, it deprives your pond of oxygen, which is not too good for your pond.

Is Duckweed Safe for Fish?

Duckweed is safe for your fish. It is highly nutritious and provides the fish with the necessary benefits. The only setback is the Duckweed’s excessive growth of cook.

There are several fish that will eat ducks. If your fish is part of these fish, you should not hesitate to let them feast on the plant. You can also ensure your fish’s good health by taking certain steps when feeding them with Duckweed.