Black Beard Algae can cause serious problems for the health of your aquarium, and unfortunately, killing them is not quite as easy as most of us would like.

What can you do to kill it? Will something as simple as boiling water work?

Yes, you can use boiling water to kill black beard algae,  Unfortunately, this method of killing Black Beard Algae is only viable for decor in your aquarium.

We’ll cover the process down below in detail. Don’t worry, the whole thing is pretty simple. How to Use Boiling Water to Kill Black Beard Algae

There are two ways you can use boiling water to kill the algae in question. First off, you can take all of the items you need to clean, throw them in a big pot, boil up some water in another container and pour the boiling water directly on the objects in question.

Secondly, you could put all of the algae-covered objects in a big pot, fill the pot with water, then raise that water to a boil. The extreme heat will kill the Black Beard Algae, which will then be dissolved into the water or be easily scraped off of the afflicted objects since they are no longer alive.

Before you throw just anything into a pot of boiling water, keep in mind that boiling water would kill your plants too, so you will not be able to use boiling water to kill Black Beard Algae that is on living plants, since that would just kill everything.

This is also a problem if you want to clean any sort of aquarium decor that is made out of plastic, as extreme heat will obviously lead such decor to melt.

We wouldn’t blame anyone for thinking this, but the truth is, Black Beard Algae is just that color. There is no green algae hiding under its black exterior. You can’t boil the black part away to make the algae green. That’s just not how it works. 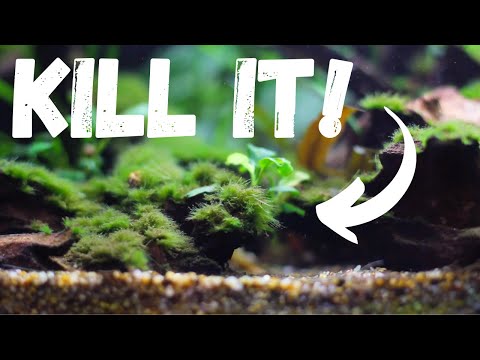 Boiling Black Beard Algae will kill it for sure, but it will not change its natural color to something else entirely. Transformation is not quite within the realm of boiling water’s power!

You can put suitable items that need to be cleaned in a pot, and either pour boiling water over them or submerge them in water and boil the water itself. When you do this, the Black Beard Algae will be destroyed: it will not turn green.