Do you want to add hammer coral to your tank with your clownfish? Are you thinking will clownfish host hammer coral?

Are you worried about any harm it can cause your clownfish?

In this article, we will discuss if it’s safe to host clownfish with hammer coral.

Yes, they will. Clownfish are highly resilient to hammer coral stings. The tentacles of a hammer coral offer protection for the clownfish.

Let’s talk about hammer coral first and see if they are a good fit for clownfish. Do you know that hammer corals have stinging cells in their tentacles? They can kill other corals that are near them if they come into contact.

Will they kill clownfish? No! This is because clownfish have a mucus layer on their skin to defend themselves from the sting of hammer coral. Clownfish will naturally try to host with hammer coral. What Corals Will Host Clownfish? (Let’s Compare Them!)

The corals that will host clown fish are

These corals are the most popular for clownfish. They do not sting and they are safe to keep next to other coral. The downside is that their tentacles are shorter than hammer corals which means less protection for the clownfish.

The tips of these corals are bright and illuminated. They look like torches in the water. The problem is that many clownfish like to smother these corals and could kill them off. Hammer corals are more resilient.

When comparing the list of easiest corals to keep and the best corals for clownfish, one stands out in particular. It’s the toadstool coral. They are usually pink or peach in color and some have glowing tips. They are very easy to care for in saltwater tanks.

And the winner is…the hammer coral! Why? Although they aren’t as easy to keep as toadstool corals, their tentacles are longer. The tips look like little hammers. They can be blue, gray, orange and green.

Hammer corals aren’t as welcoming to other species of fish. They have stronger stingers than many other corals. This is great for the resilient clownfish who get to have the hammer coral all to themselves. What Happens To Clownfish In a Hammer Coral?

Most fish will avoid hammer corals, but not your clownfish! A clownfish can draw a predatory fish into the coral. The fish wants to eat to clownfish, but the sting of the hammer coral could kill it instead.

A clownfish may actually nibble at the hammer coral. This is most likely a move by the clownfish to build up immunity or a tolerance to its sting. Clownfish are incredibly resilient and crafty too!

Did you know that they can even try to rub over the hammer coral to purposely get fragments of it all over their body? If you see how this can be an armor of protection, then you know how much a hammer coral can benefit a clownfish. 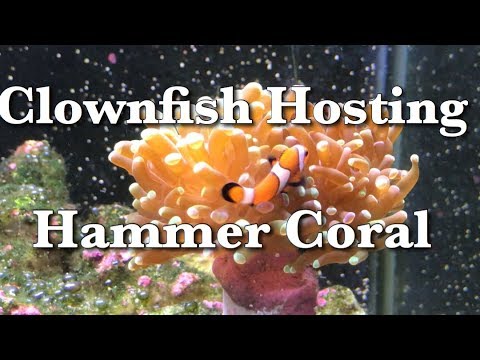 Should I Stop My Clownfish From Hosting Hammer Coral?

Clownfish can kill coral. They will probably not do this if they are being hosted by it. They can smother coral and prevent it from living in your tank.

Clownfish may love the hammer coral too much.  They much suck on the tentacles without stopping. It’s possible for the clownfish to have a droopy mouth after all this sucking. They are resilient to the sting, but there are limits.

If you want to give them a break or help your clownfish move on from that coral then here are some tips:

What’s the Easiest Coral To Keep?

It seems that clownfish and coral get along in most cases. They benefit each other, but is hammer coral the easiest choice? The answer is no. There are easier corals to keep in the tank. Here’s a list:

The problem here could be that your clownfish will not want to host with some of these corals. Some corals are not good hosts for clownfish. Clownfish will prefer softer coral that offer the most amount of protection.

It is recommended to place anemone with clownfish instead of corals. Anemones are more squishy while corals such as hammer coral can produce calcium carbonate that acts like a sort of skeleton over time.

Some corals are soft and safe for clownfish. Hammer corals are one of these types of coral that clownfish actually like and will attempt with host with.

Clownfish like to be protected. They swim in and around the coral while many other fish or marine life tend to stay away. The sting from a hammer coral won’t affect them as much as it will for anything that wants to harm the clownfish.

Will hammer corals host clownfish? Absolutely! Will they get along? Sure. As long as the clownfish don’t overdo it by smothering it or sucking on their tentacles nonstop, then the relationship between them is great.

There should always be a fine balance to the ecosystem we’re trying to keep in our aquarium. Allowing the clownfish to be curious and confident by letting them enjoy corals and anemones are fine.

Hammer corals are a wonderful addition to a tank with clownfish. As usual, it’s best to observe their behaviors and actions to make decisions that benefit your entire aquarium.