Are wondering if you need to keep more than one clownfish? Since clownfish are able to pair with a mate, do we need two of them together? In this article, we’ll find out if one clownfish could live on its own.

Can Clownfish Be Kept Alone? Yes, clownfish are fine if they are alone. If you pair two clownfish together, they tend to be more lively. Is a lively pair of clownfish a good thing? Do lively pairs clownfish live healthier lives than lonely clownfish? Let’s find out!

What Happens If You Keep a Single Clownfish?

If you keep one clownfish in your tank, watch how they swim! A single clownfish can roam freely through the entire space. They may not have anything else to do, so they’ll just swim all over the place.

If the clownfish is hosted by an anemone, it will probably stay close to its home. The anemone provides a healthy territory or a safe space.

The single clownfish may choose to defend the anemone instead of swimming around every portion of the tank.

Some people notice that a single clownfish becomes sluggish or sulks in one corner of the tank. Is the clownfish displaying a feeling of loneliness? Let’s look into it.

Can Clownfish Get Lonely?

Unfortunately we can’t tell exactly what a clownfish is feeling. We can only judge by their actions.

Some clownfish will do just fine on their own. They’ll be energetic and they could be a great addition to other species of fish in your aquarium.

Sometimes they can slow down and stick to one corner. If they are acting sluggish or eating less food, they might exhibit signs that we consider to be loneliness.

We shouldn’t compare fish to people, but it’s so easy to think about it this way. Some people like to be alone and some people like company. A clownfish can thrive on its own without a mate.

We should also say that it’s better to have one or two clownfish instead of three or more. A single clownfish is not a problem.

A mated pair is great. Three or more clownfish could become aggressive or territorial with each other.

What Are The Characteristics of a Single Clownfish?

A single clownfish may show the following tendencies:

An active clownfish is thriving and living their best life. A single clownfish that is active may not need an anemone to host. It isn’t required.

Without an anemone, the single clownfish will also be free-roaming.

This is simply saying that your clownfish will explore the entire tank. They will not stay confined to one area.

They will not feel the need to defend eggs, their mate or their anemone if there aren’t any.

Some clownfish will become aggressive with each other. Two males may fight to prove that they are a more suitable mate.

A female will show dominance of the male and they are usually larger. A single clownfish will not have a reason to be aggressive. They could be peaceful and carefree.

This is when someone might want to get a second clownfish. If a single clownfish slows down, sulks or stays in one corner, they might be sluggish. They could pick up and become more lively if they are paired with a mate. 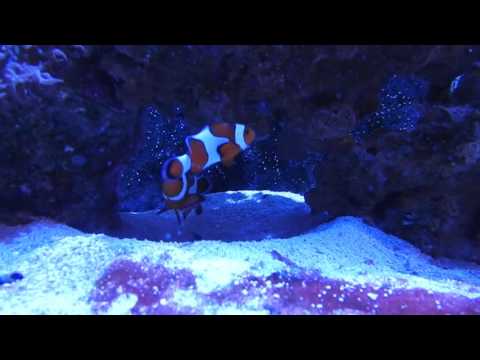 What Are The Characteristics of Paired Clownfish?

A pair of clownfish may show these characteristics:

An aggressive pair of clownfish might be going through a natural pairing process. The male must submit to the dominant female. Once this is done, the pair will become less aggressive with each other.

However, they may become more aggressive with other fish in the tank when they’re paired together and working as a team for a common goal

The common goal for a pair of clownfish is to reproduce. In order to do that, the female must lay her eggs. The male clownfish defends the eggs with everything he’s got or the female would seek to replace him in the wild.

The clownfish here are captive and the space is limited if they are sharing it with other fish. Defending the anemone or their territory is important to the clownfish. They may also be prone to biting our fingers if we put them in the tank.

Please be careful if you don’t want them nipping at you.

Two clownfish are very lively together. They chase and mimic one another as they swim around. It’s fun to watch them enjoying each other with active and lively movements.

There is no exact science to prove they are happier or healthier when placed together. If they get along and are actively enjoying their space together, then we can assume that it’s an enjoyable situation.

A single clownfish may become inactive or slower. If adding a potential mate picks them up and makes them livelier, then we can give it a shot. This is an option as it isn’t mandatory for them to be paired. Should I Keep Two Clownfish?

Please keep in the mind that a male and female should be kept together if you’re planning on keeping two clownfish. The female should be larger in size to make it easier for the male to submit to her. The pairing process will be faster this way.

Three or more clownfish in a tank will make pairing more difficult. It will also increase the likelihood of territorial disputes. If you choose to give your single clownfish some company, please take this information into account.

The choice is yours if you want a single clownfish. You may wish to add a female to the male or vice versa. Watch your single clownfish to see if it’s lively and not acting sluggish.

Clownfish can definitely be kept alone. If you feel that pairing them would be more fun for you and the clownfish, then go for it!

The key is to enjoy the process. We’re glad to help you and help all of us with our fish at HelpUsFish!