Do you see little clownfish eggs in your tank? Wait, the clownfish are eating the eggs! Is it normal for them to do this or is something wrong? In this article, we’ll dive to the bottom of this and find why clownfish eat their eggs.

Why Do Clownfish Eat Their Eggs? Usually the male clownfish eats the eggs that are infertile or damaged. Sometimes both parents will eat the eggs out of inexperience.

It is quite normal for clownfish to eat their eggs. The factors are numerous and we should look into them. Why Would the Male Clownfish Eat The Eggs?

The male clownfish is the submissive of the pair. The female lays the eggs while the male must watch over them and do his best to take care of them.

It has been noticed that female clownfish will cast aside their make partner if he isn’t doing his job of tending to the eggs. He won’t have time to kiss his female partner goodbye for he is now yesterday’s news. The female will find a new partner.

Frostbite Clownfish in a Reef Tank.

A male must take on the role of “egg-sitter”. He will be able to tell which eggs are non-viable and he will probably eat them.

Why is My Clownfish Eating the Eggs and Spitting Them Out?

Once again, the male clownfish is taking care of the eggs. He is checking to see which ones are infertile and he’s eating them. He may also eat the eggs that are damaged by fungus. He doesn’t want the fungus to spread and his resilient body can digest it properly.

The eggs that he’s spitting out are actually being taken care of. He’s cleaning them with his mouth and not trying to eat them.

The male clownfish does the following with the eggs:

Why Are the Male and Female Clownfish Eating the Eggs Together?

Clownfish could lay eggs as often as every two weeks. The process starts soon after a young couple finally become a pair. The make submits to the larger female and the reproduction cycle begins.

The young couple is inexperienced at this point and they don’t know what they’re doing. It is very common for the first few attempts to fail. The reason for this failure could be inadequate care for the eggs or the fact that they are eating them. 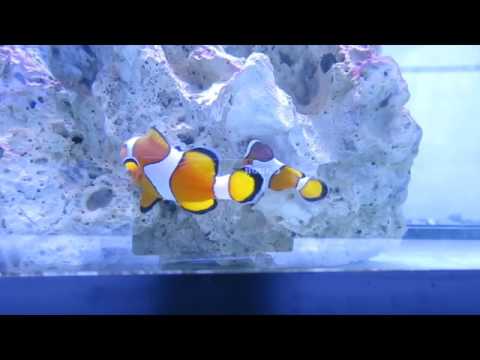 How Long Does it Take for The Eggs to Hatch?

The eggs of a clownfish could hatch as quickly as 4 days. It’s more common for them to hatch in 6-8 days. The male clownfish must do his job to fan them and clean them.

Some of the eggs are unfertilized and will never hatch. These eggs look pasty-white and will soon become a meal for the clownfish father or the couple.

The clownfish parents will not take care of their babies once they hatch. The entire fry could become a meal for neighboring fish if they cannot survive on their own.

What Are Some Reasons Why Clownfish Eat Their Eggs?

These eggs have no chance of hatching because they weren’t fertilized. They will not survive and will most definitely decay. They contain calories and a male clownfish will notice this right away. He will not let the calories go to waste.

A fungal infection could spread to the entire fry. This would most certainly reduce their chances for survival even if they hatch. The male clownfish must recognize this and get rid of the infected eggs in the easiest way possible. Eating them doesn’t harm the resilient male.

The female may have never done this before. Both of them are trying to figure out how to live together and breed babies. The learning process is cruel for the first few batches of clownfish eggs. They can and will be eaten in many cases. This is completely normal.

We know that clownfish will also do this in the wild. They understand that there are calories in the caviar. They need energy to survive and protect their territory. The problem isn’t usually underfeeding. They just want the extra calories.

The Clownfish Are Stressed

When the clownfish are stressed, they may stop taking care of their space. Clownfish like to clean up and organize their area. If they are stressed by outside forces, they may neglect these tasks.

The bright lights or new neighbors are causing them to burn more energy and get less sleep. They are moving around more or acting erratically. They may be getting nervous. This could result in the clownfish eating their eggs. How Do You Prevent The Clownfish From Eating Their Eggs?

If the clownfish deposit their eggs on something removable, then you can take it out of the tank. Remember to wear gloves because they will try to bite your hand.

You will need a hatching tank and raise rotifers. This is their first food or you can get some decapsulated baby brine shrimp eggs. Occelaris clownfish are more popular for breeding. They will be sold or traded more easily than maroons or tomato clowns.

A clownfish eats their eggs sometimes. This is normal. It’s usually the male doing this as part of the process of tending to them. Some are infertile or non-viable with a fungal infection.

Sometimes a young clownfish couple doesn’t have the experience and may eat the first few batches. Unless you want to raise the fry yourself and become a clownfish dealer, seller or trader, you can let nature run its course or remove the eggs.