How Much Food Do I Feed Clownfish? 1-2 Feedings are day are best because clownfish are active fish. Feed only up 6 pellets or 4 flakes, but be observant and patient.

This could be too much because pellet or flake sizes vary. Track the time it takes to eat the food and see if they are leaving any behind.

How Often Are Clownfish Feedings?

This is a great question, but it depends on the person. Some people have more time at one point in the day to feed their clownfish slowly. In this case, one satisfying feeding a day is enough.

Other people have busier schedules and drop less food into the tank to make sure they aren’t overfeeding. In this case, it’s best to feed them twice a day.

Whether it’s once or twice day, the most important thing is to see if they are leaving any food behind. This could indicate a few things:

More often than not, it’s the first point that is usually the culprit. Overfeeding is very common. It’s best to observe and learn how much your particular clownfish wants to eat if they are leaving food behind.

How Long Should A Clownfish Feeding Take?

Clownfish are not picky eaters. They tend to devour or gobble up what we feed them. A feeding could last,

If you’ve thrown in 2-3 pellets and seen your clownfish make them disappear within seconds, then all is well. Your clownfish were hungry and now you’ve done your job.

Repeat this again later in the day and your twice a day feeding schedule is perfect.

If it takes 2-3 minutes, then maybe they are not taking to the food too well. They might be hesitant to eat it quickly because they are searching for something better. If you throw mysis or brine shrimp, then they go after it faster than a fish flake.

You may want to add a tasty snack like bloodworms or daphnia from time to time as well. Varying their diet will ignite their appetites.

If it takes up to 2 hours for a single feeding, this is more about your preference. Maybe you work at home and sit near your aquarium. You enjoy feeding your clownfish, but you do it in tiny portions.

You could break down a single pellet of tear a flake into smaller pieces. You watch your active clownfish burning energy through the day as they swim and play. From time to time, you throw in some fragments of food and watch them swim after it.

At this point, you’re having fun with the process and only doing this feeding ritual once per day.

Should I Feed Live, Frozen or Free Dried Food To My Clownfish?

It’s great to have multiple options. Remember that clownfish don’t want to eat the same thing every single day. Also keep in mind that they are omnivores and require plant material in their diets. Fish flakes for clownfish tend to contain plant matter as well.

Live fish food will be protein rich since most likely it will be something like bloodworms or shrimp. Make sure the size is small enough for the clownfish to devour.

Freeze dried food is easy to take out of the bag and drop into the tank directly. Feed them sparingly because your clownfish will love it. You may think they need more because of how fast they eat up the food, but it’s usually because of how tasty it is.

Frozen food must be thawed before serving. Let your frozen clownfish food thaw outside without sticking it into the microwave or heating it. The nutrients in the frozen food could be lost in the heating process.

You can’t go wrong with any of these options because clownfish are easier to feed than many other fish. Vary the food and make sure there are plant-based options mixed in or added. 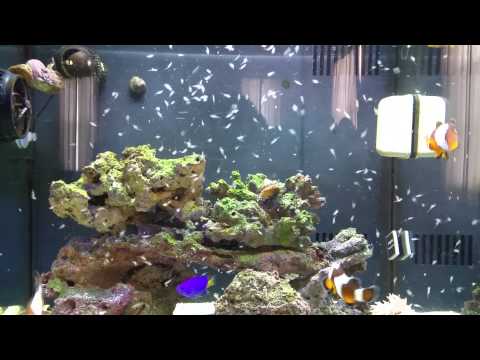 How Much Food is Too Much For Clownfish?

Exceeding 6 pellets is going to be a problem. They could get bloating or indigestion. This could lead to future illnesses or early death.

This is why most people split the feedings into two parts of the day. Too much food all at once will not be healthy for your clownfish.

Those who choose to feed their clownfish once per day tend to take more time and wait between dropping each pellet or flake.

If you choose to drop in live, frozen or freeze dried food, make sure the size resembles that of a flake or pellet. If you throw in a whole cube full of bloodworms, you have just overfed your clownfish.

How Can I Tell If My Clownfish is Hungry?

Once trick is to look at their bellies. Does your clownfish look like it has a sunken belly? If so, add one or two more pellets or flakes.

The thing to consider is that clownfish eat like pigs. It’s funny, but you’ll see a lot of people make that comparison. Because clownfish are not picky eaters, they’ll take a stab at anything you try to feed them.

If you’re clownfish is not eating the food, they are not hungry or they don’t like it. Remove the food for now and try again later. How Long Can a Clownfish Go Without Eating?

Clownfish are resilient. If there are any issues with being unable to feed them, they should be fine for 3 days or so. Some people say they’ve lasted up to a week without eating.

These circumstances should hopefully not arise too often, but if they do, don’t panic. Your clownfish will find a way to survive. Since they can eat plant matter, they may nibble or seaweed or algae in the tank.

Why Do Some People Fast Their Clownfish?

Since clownfish eat and love to eat, they may be trying to trick us. We may fall victim to it and start adding too much food. They will eat it up and we will think nothing of it.

Fasting allows for your clownfish to clear their digestive systems. It can be done once or twice a week at the most. Once is enough because clownfish are more active compared to slower fish.

A sedentary fish could go a second day without eating since they aren’t burning the calories from the food quick enough. A clownfish likes the exercise and they’ll burn the food with activity.

Nonetheless, fasting could be introduced every other week just to clear their bellies and prevent bloating or indigestion.

Feed your clownfish once or twice a day. If you feed them up to 6 pellets or flakes in one sitting, then sit for a bit and feed them slower.

Clownfish love to eat. It’s up to us to vary the food and make sure there’s enough nutrition for these omnivores.