Swordtail is a freshwater fish that is popular among tropical fish. It is used in several medical and genetic research all over the world.

This article explores the appearance of black spots on your swordtails and how to treat this condition.

Why Does My Swordtail Have Black Spots

Black spots, also known as Diplopstomiasis or fluke disease, appear as tiny black spots on the skin, fins, and flesh of fish.

Black spot disease is common in freshwater fish and is usually caused by the metacercaria stage of digenetic trematodes, normally from the Diplostomidae family. Is It Black Spot Disease

Black spot is an understood disease caused by flatworm larvae of the genus Neascus. Most of the conditions or disorders that happen to fish are majorly a result of overcrowding in the fish tank, poor quality of water, and excessive stress.

Also, the refusal to isolate any new fish that has just been introduced to the aquarium, or the fish that is sick, can cause this disease. These above-listed factors can become minimal by taking appropriate steps, care, and good hygiene.

Even though the black spot disease is not an extremely common infection among the home fish tanks, reproduction by the worm is rapid. The illness can quickly spread among the fish that inhabit the tank when appropriate treatment is not given to the fish.

How To Treat Black Spots On Swordtail

To treat black spots on swordtail, you can perform gravel vacuuming on the aquarium, which may help reduce the worms enclosed in the substrate whenever an outbreak occurs.

Also, it would be best if you tried to put the fish which has been affected in a quarantine tank to prevent the disease’s further spread in the main tank.

When you separate the fish that have an infection from the main tank, you are supposed to perform a freshwater dip, which is one of the best ways to reduce all types of diseases.

The next step is to give them a formalin bath and ensure you heed the instructions given by the manufacturer when you want to mix and use the product.

How To Prevent Black Spots On Swordtail

The fish that have been earlier infected with the black spot disease will later be reinfected, no matter how well you treat them. But the best thing to do is to prevent the fish from contracting the disease, as prevention is better than cure.

These parasitic Turbellarian worms can live for a long time on their own without a host, so the best option is to eradicate them from the aquarium.

To prevent black spots on the swordtail, you can leave the main aquarium devoid of all the fish for several months. This is a preventive measure that most aquarists recommend being effective.

The theory of this preventive measure is that when the worm is without a host fish or the host fish have been taken out of the aquarium, the life cycle chain of the worm will break down, and it will not be able to reproduce. After then, the worm will die off in due course.

The younger worms live on the substrate of the fish tank and feed on organic debris and detritus. Later after they feed on those materials, they search for fish hosts.

If you try to siphon up the organic matter, which is excess that accumulates in the bottom of the fish tank can help you in the prevention of the disease.

Furthermore, hypo salinity is another method you can adopt for tanks that contain only fish, which do not include any freshwater-sensitive invertebrates.

When you want to use the hypersalinity method, you should stir the substrate occasionally to release the higher salinity water trapped in the gravel and exposes the worm to the lower salinity water in the aquarium. 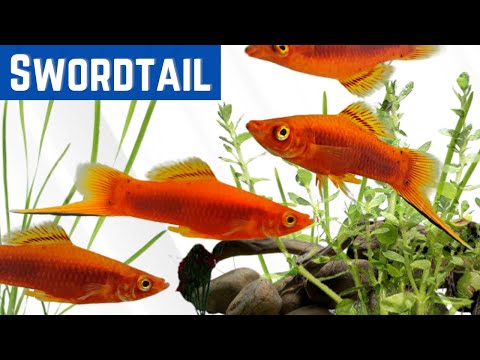 Signs Your Swordtail Fish Is Ill

When the worm starts to feed on the host fish, the fish acquire melanin pigmentation, which results in the black spot on the skin of the swordtail fish. Some known signs will let you know when your swordtail fish is ill.

Also, whenever the swordtail clamps the fins, this shows that they are I’ll, and they need you to attend to them at the moment.

Another sign or symptom of illness in sword rail fish is that the fish itches itself against tank objects and gravel due to the skin irritating it.

Moreover, Whenever you notice most of the above-listed signs in your swordtail fish, you should take some necessary and required steps to curb the itching that happens to the fish.

Providing the necessary care and giving the fish the supposed drug is a significant and essential step in preventing illness in swordtail fish.

We hope you now understand what could cause your swordtail to fall sick. While this article helps you understand this specie better, it is essential to be careful when performing treatments you do not know about.

The prevention tips will go a long way in keeping your swordtail fish safe, healthy and playful. Leave your thoughts below!

link to Why Is My Birds Nest Coral Turning White

Having a fish tank beautifies your environment and brightens it up. However, understanding specific topics are essential. This article gives you comprehensive knowledge about cloudy water, its...