The oily film is known as biofilm which occurs when microorganisms stick to the surface of objects in the pond while they begin to reproduce. They form an attachment by secreting slimy, glue-like substances, which causes the biofilm at the pond’s surface.

Why Does My Pond Water Surface Look Oily?

You can mistake the oily film on the surface of your pond water for an oil spill or algae bloom. But you are mostly on the wrong hook as the most common cause of the oily film is bacteria. The action of bacteria in the pond can cause the water to develop oily film at the surface.

The oily film occurs when there is a large amount of animal life or decaying plant in the pond in bacteria presence. To cut a long story short, the cause of biofilms in the pond is dissolved organic carbon. It forms when metazoan or algae life dies faster than naturally occurring bacteria can degrade it.

You can classify the films as a dead protozoan or algae scums. Biofilm can also occur when these microorganisms produce slimy, glue-like substances when they are reproducing. Biofilms are a good sign that your pond is of low water quality and out of balance.

How to Remove Oily Film on Pond Surface

You can also raise the pH level by adding lime to the pond. It will serve as good control of oily films. An ethical solution to biofilms in your pond is to keep good water quality.

The oily film can also result from oil spills, so you also have to be careful and get rid of the oil source. 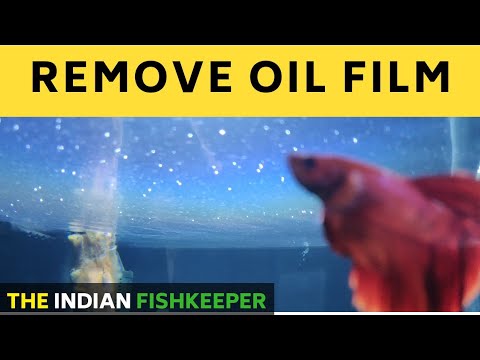 How to Prevent Oily Film on Pond Surface

The sole cause of oily film on your pond surface is poor water quality. The microorganisms that cause the oily film would not be in the pond if the pond water were of good quality. To prevent this oily film from the surface of your tank, you have to make sure you maintain adequate water quality.

You also have to make sure you perform a regular water change to ensure the water is always clean. You can also make use of water filters, pumps, and other necessary devices to keep your water quality intact. If you can maintain good water quality in your pond, you will prevent this oily film. Will Oily Film on Pond Surface Harm My Fish?

The type or cause of the oily film on the surface of your pond will determine if it will harm your fish or any aquatic life. If the oily film results from oil spills, it can be detrimental to your fish. It will trap and prevent the exchange of gases in the water, causing limited oxygen for your fish.

This kind of oily film will trap gases for your fish and pose a risk of toxicity. The oil spill contains chemicals that can be very harmful to your fish. These chemicals will kill your fish and every aquatic life faster than suffocation.

If the oily film results from microorganisms’ activities, it is a bit less harmful but not completely safe for your fish. It will also trap gases, but it will provide little or no toxicity. Whatever the cause or type of oily film, you have to take care of it for the safety of your fish and other aquatic lives.

How Do You Remove Biofilm from a Pond Surface?

The main cause of biofilm is poor water quality. If you can maintain adequate water quality, you will remove the biofilm. You can also raise the water’s pH and treat it with bacteria and enzyme products.

You can also use herbicides and algaecides to remove biofilms, but you have to be careful of excessive usage. Ensure you keep good water quality, and the biofilm will be off in no time.

The oily film on the pond surface is mostly a result of microorganisms in the pond. It can also have other causes, but other causes are rare. Biofilms occur due to poor water quality, so you have to keep good water quality to get rid of it.