Did you know your koi can attack some of your goldfish? Are you willing to gamble on that?

Save yourself the worries and troubles as this article will inform you about goldfish and koi fish.

Can Koi and Goldfish Live Together?

Koi and goldfish can live together in the same tank, provided the goldfish and koi are similar sizes. Koi fish tend to feed on smaller fish, making small goldfish species like fancy goldfish unsuitable to be in the same tank as koi fish.

Common goldfish and other goldfish of equal size with the koi fish are suitable tankmates. Are Goldfish and Koi Compatible?

Goldfish and koi will make compatible tank mates, provided you take note of some factors.

They are both docile fish and will both have no reason to cause troubles in the tank. However, koi fish will find some species of goldfish appealing as a meal.

These species are not suitable tankmates and should not be in the same tank as koi fish.

These species are small in size, and koi fish will feed on smaller fish when they come across them. An example of these small species of goldfish is the fancy goldfish.

You can keep different goldfish types with koi fish, but fancy goldfish and other smaller species are not a good choice.

Generally, goldfish are bottom feeders and possess similar characteristics as koi fish. These attributes make them compatible with koi fish in the same tank. 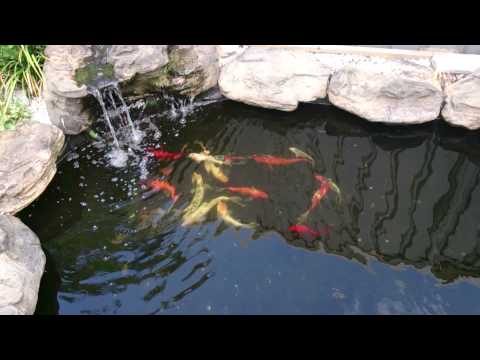 Can Koi and Goldfish Live Together in a Tank?

It is not the best idea to keep goldfish and koi fish together in the same tank for a long period of time. If you have juvenile koi fish that are not yet fully grown, then you have a better opportunity to raise them together with goldfish for a shorter period of time.

A koi fish can grow about 3 ft in length and the tank is most likely not going to be a suitable size for them. A stressed koi fish could become a little bit more aggressive with its tank mates. This includes goldfish.

If goldfish and koi fish are not around the exact same size, then the smaller one is a target for the larger one to eat it. A koi fish can easily open its mouth to consume a smaller goldfish.

There are studies that show that fancy goldfish are a particular type of goldfish species that get consumed the most by koi fish in tanks.

Once again this is a fine, but temporary solution,  but after your koi fish becomes an adult, you need to move it to a larger size tank and separated from a smaller size goldfish.

Are Koi Fish and Goldfish the Same?

If you stare hard enough at a goldfish,  you may start to think that it is the relative of a koi fish, but you are incorrect. They are both part of a separate species.

Goldfish actually started by selectively breeding Prussian carp. They were able to mutate the color of Prussian carbon to goldfish. Goldfish can be considered a new species on their own away from Prussian carp.

This doesn’t mean that goldfish and koi fish are the same. An interesting fact to know is that Koi fish can actually breed with goldfish. Brown or gray colored fish may result, but they will probably turn orange as they grow up. This will never be considered a koi fish.

One big difference between them that you can notice is that koi fish have whiskers or barbells but goldfish do not.

Can Fancy Goldfish Live With Koi?

There is a low-risk chance that fancy goldfish will be eaten by koi fish. It is better to keep fancy goldfish and koi fish at relatively the same size. This is probably not possible when Koi fish reach adulthood.

Keep in mind the koi fish can also breed with goldfish and create a different species altogether. This is the biggest reason why we would choose not to keep fancy goldfish with koi fish. A second reason has to go back to studies showing that a koi fish act aggressive in particular with fancy goldfish.

The reasons are not conclusive enough to state here,  but we know that they can suitably live together for a shorter period of time while the koi fish is still growing up. Smaller sizes of fancy goldfish should not be kept with koi fish for these reasons.

Can Koi and Goldfish Live Together in a Pond?

Koi fish are going to be the aggressors if the opportunity arises. Overstocking will be most likely the culprit as to why your koi fish are suddenly become aggressive towards other goldfish.

Keeping them together permanently may not be the best idea. This is because koi fish are opportunistic feeders and may open their mouths wide enough to consume a smaller sized goldfish.

If they’re relatively the same size,  chances are that nothing will happen and they will co-exist together peacefully.Koi fish would rather leave schools of fish alone, but if there is a fancy goldfish on its own with its diminutive size, it can definitely be bullied or eaten by the larger koi fish.

Koi fish are not very aggressive fish, so they do not attack fish anyhow in the tank.

They will only display a bit of aggressiveness during breeding seasons and only show it to their fellow koi fish. Koi fish will not kill goldfish, especially when the goldfish are large.

Cramped spaces usually cause fish to become aggressive, but goldfish and koi keep each other’s company even in the cramped situation.

Koi fish will not kill goldfish, neither will goldfish harm your koi fish. This act does not apply to fancy goldfish and smaller goldfish species in the same tank as koi fish.

What Kind of Fish Can You Put with Koi?

Koi fish are a peaceful and hardy type of fish. They can tolerate other fish species in their tank, provided the fish has some characteristics.

The kind of fish you should put in the same tank with koi fish should be a gentle and unaggressive fish.

This kind of fish will not harm your koi fish and will do well as koi fish themselves are peaceful. You also have to consider the size of the fish you want to add to your koi fish tank before adding them.

The fish has to be of similar size to the koi fish; it should not be larger or smaller.

Another thing you should consider before adding any fish to your koi fish tank is the temperature requirement.

The fish should have the same temperature requirement as the koi fish. The fish’s care level should either be lesser or the same with the koi fish but not greater.

You should add bottom feeders to the tank to eliminate fighting when feeding them. The bottom feeder will feed on the food that falls to the bottom while koi will eat theirs at the upper level creating a peaceful environment.

Also, make sure the fish you are adding have similar characteristics as koi fish.

Listed below are fish that are compatible with koi fish in the same tank;

There are also several other species of fish that will live peacefully with koi fish. You only have to make sure the fish meets the tankmate requirements of koi fish.

What Kind of Fish Can You Put with Goldfish?

You have some of the fish that you can put with goldfish listed below.

Koi are hardy fish and will tolerate a wide range of temperatures from 35℉ to 85℉. The ideal water temperature for them falls within the range of 65℉ and 75℉. The pH level of the water should range from 6.8 to 8.2.

The hardness of the water should range from 60 to 160ppm. The ammonia level should be zero. Maintain this temperature, and your koi fish will be fine.

Goldfish will thrive in water with a temperature range of 65 to 85 degrees Fahrenheit.

Goldfish prefer alkaline water and will thrive in water with a pH range of 7.0 to 8.4. Rapid water changes can be dangerous for goldfish, if not lethal.

You also have to maintain clean water for your goldfish by removing dead organic matter from the tank or pond.

You can also get rid of algae from the tank to keep the tank clean. Maintain good water conditions for your goldfish to ensure their good health.

Can Goldfish Survive in a Koi Pond?

Goldfish and koi are hardy fish with similar water conditions. Goldfish can survive in the same pond as koi fish. They will even survive the winter together in the same pond, provided the pond does not freeze.

How to Introduce Goldfish to a Koi Pond

To introduce your goldfish to a koi pond, you have to take some steps. First, you have to put the goldfish in a small container like a bucket and add a small quantity of water into the tank every 15 to 20 minutes.

After doing that for a while, you can now introduce them to the pond as they would have adjusted to their new environment.

Koi and goldfish and can live together in the same tank or pond without any issue. They both have similar water requirements and will make suitable tankmates.