Do you want to keep frogs with your koi fish in the same tank or pond but do koi eat frogs?

Are you scared one of the two parties will get eaten or worse?

Keep your fingers crossed as I will be talking about koi fish and their interactions with frogs.

Koi fish will not eat adult frogs as they are usually to big to fit in their mouth.  Koi will eat small frogs, spawn and tadpoles as they are smaller and makes a good meal for the koi. Koi fish will eat almost anything that fits into their mouth, and that includes tadpoles or baby frogs. They do not feed on fully grown frogs but the ones that have not completed their metamorphosis. Tadpoles can be a good meal for your koi fish as they provide a pretty deal of nutrients.

Small or baby koi will not feed on tadpoles because they cannot eat them. Tadpoles will also feed on the food you give to your koi, making them more nutritious for your koi. You might want to remove the tadpoles from the pond as they can be too many and disturbing for your koi. 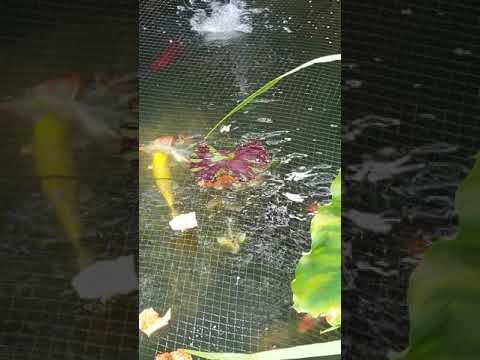 A lot goes on in a pond’ ecosystem that can force the life within to do strange things. At one point you may notice a frog riding on the back of a large koi fish and wonder if that’s normal. In other instances a large bullfrog could attack or eat a baby koi fish.

Baby koi and koi eggs are susceptible to be eaten by large frogs such as bullfrogs. Frogs will not harm adult koi. Frogs seem to be able to get along in a spacious and comfortable pond with many fish.

Their interaction is considered healthy especially in instances when you may notice a frog actually on the back of a large koi without the carrier fish being concerned about it.

If there’s plenty of food to go around, all is well. If you they have a lack of food and too many baby koi or koi eggs then remove any large frogs to avoid the risk of predation.

Frogs can spawn in your koi pond, but you do not have to worry as it is a good sign your pond water is good. Frogs will not spawn or live in polluted water, making your pond accredited for neatness. As for the spawn, you should not worry as your koi will eat them.

Frog spawn is an easy meal for your koi and has nutritional benefits. If the spawn luckily escapes the koi fish’s feasting, it will grow to become tadpoles, and the koi will feed on them when they get the chance.

Since we have determined that koi eat frog spawn, it’s safe to assume that koi carp will opportunistically do that same. Neither will actively hunt out frog spawn when there are plenty of regularly scheduled feedings.

A hungry koi carp can eat almost anything that fits into its mouth. If there are frog spawn nearby and the koi carp opens its mouth, there is no reason to suggest that it wouldn’t try to eat them.

The only notion here is that frog spawn is nutritious and a lack of nutrition would encourage a koi carp to eat as many as possible. Eating frog spawn is not anywhere on the list of a koi carp’s staple diet and shouldn’t be considered an automatic source of food.

The timing, cleanliness of the water, stress levels, temperatures and overall nutritional needs of koi carp determines if they’ll take a few mouthfuls of frog spawn when the opportunity present itself.

Toads are not on the menu of fish as they all avoid them, including koi fish. Koi fish will happily eat baby frogs and tadpoles but will by every means avoid toads and their offspring. If a koi fish attempts to eat a toad or its product, it might end up losing its life.

Toads can be a part of the pond and will not affect the koi. But if the toad becomes too much, it can cause the death of the fish. Toads are toxic to fish and even humans, so you should control the pond’s population of toads.

What is the Difference Between Frogs and Toads?

There are different ways you can differentiate a frog from a toad. The most obvious difference is the body structure. Frogs have long legs for hopping, while toads have shorter ones designed for crawling around.

Another difference is their skin. Frogs have wet, smooth, and slimy bodies while toads have dry and warty skin. Frogs are edible to most animals, while toads are very toxic.

Can Koi Live with Frogs?

Although frogs are notorious for feeding on aquatic animals, they tend to leave koi to live in peace. Koi and frogs will leave together provided you meet the needed requirements. Frogs will take delight in eating baby koi, and koi fish will also reciprocate the gesture by feeding on tadpoles, baby frogs, and frog spawn.

Frogs do not always stay at the surface of the pond as they will lay their eggs and move along. But if they are to stay in the pond, they will live peacefully together as they do with their more dangerous cousin, toads. Frogs and tadpoles can also feed on the same food as koi, so this might be a reason you might not want them in your pond.

What Does a Frog Get Eaten by?

Frogs can make a good meal for various animals ranging from terrestrial to aquatic and arboreal animals. Some small mammals feed on frogs when they come across them—lizards, water shrews, snakes, birds, otters, etc. Frogs are predators to some animals; at the same time, they get preyed on by other animals.

Koi cannot eat frogs, but they will eat their offspring. Koi fish will feed on tadpoles and baby frogs with delight. They will also feed on frog spawn when they come across it.