Have you ever wondered if the koi carp in your pond ever go to sleep?

Do they sleep at night like humans or are they nocturnal?

Do they need sleep like us?  I will cover all this and more below.

Usually, koi do their sleeping in short spurts and go somewhat dormant during the winter, which is when they do most of their sleeping. They don’t sleep for 8 hours as you do, but they do have to rest from time to time.

Do Koi Sleep at Night?

Yes, At night, koi will generally take some time to sleep. They subtly float in a single spot while they’re asleep, usually in a group at one time. You might not see this, as koi tend to choose the bottom of the pond to sleep.

How Long Can You Keep Walnuts in the Shell?

They do prefer sleeping at night, but if your koi happen to be awake, then there is usually a simple answer. For example, it could be that your fish are staying up at night because that’s when the best food sources like insects are more active.

On the opposite side of things, there could be something lurking around at night (such as a raccoon or cat) that is scaring or even hunting your koi fish. After all, who could sleep with something around that wants to eat you?

Unless you want to stay up and do a stakeout of your pond, you’ll want to search the area surrounding your pond for tracks to find out if that really is the case. 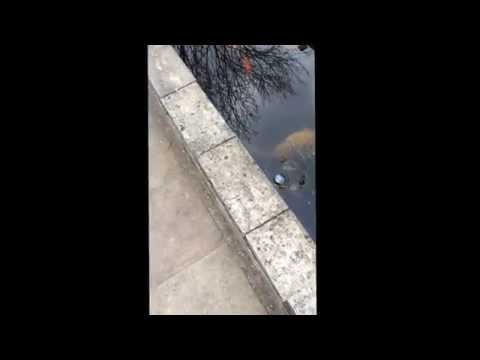 How Do Koi Sleep?

Sometimes it’s hard to tell when koi fish are sleeping. They obviously do not sleep the way humans do. Koi fish require only short periods of rest. This is a time where they are looking for a safe spot to gently float.

You may notice koi fish looking around to find a very comfortable area where they’re going to feel safe from any types of predators inside the pond or most likely from rodents outside who are opportunistically looking to feed on them.

The location could be in the middle of the pond or towards the bottom. These areas are the most safest from any raccoons or other rodents who will not dare jump in and swim after them.

Koi fish may wake up from their slender slumber from time to time and nibble on some plants or bugs.

If there are bugs that are active around them,  they may take advantage of that opportunity as well. So, during their slumber if they sense that there are bugs around, they may wake up and actively try to eat them.

Once they are satisfied, they will try to group together near the middle of the pond or the bottom to sleep together in a comfortable position. This usually requires them to float motionless in one area.

The reason why they would choose a central location in the pond would be to stay away from any predators on the edges of that could scoop them up such as a pesky raccoon.

Can Koi See in the Dark?

Koi fish can see in the dark ever-so-slightly. This is not their strongest sense when they are moving around in the dark. They’re using other senses such as sound and touch. They have pressure sensitive organs as well. They’re able to sense nearby animals and objects from the way the water pressure changes.

Koi fish are able to sense the sounds and waves of bugs on the surface of the water while they are sleeping at night. This could be enough to wake them up for a quick meal.

Koi fish are also able to hear you at night. They are accustomed to your voice and would wake up if they noticed that you are around. Try to be calm and move carefully around the koi fish pond at night to not disturb them.

No. Koi fish do not need any lights at night. They would appreciate at least 8 hours of darkness to help their diurnal cycle. We can’t expect a fish to sleep the entire night, because there are plenty of active critters on the surface of the water that are easy snacks for them.

Most of the time, they will nibble a bit on some plants but they’ll do so in short periods. Other times koi fish will be grouped together in the middle or bottom of the pond and their slow motionless floating shows us that they are asleep.

Koi fish do not want more than 5 or 6 hours of direct sunlight. It’s always great to allow for some cover in the pond in order for them to have some shade.

Water lilies are a great idea too because not only do they provide shade, they also attract insects that Koi fish would love to eat.

When Are Koi Most Active?

While koi fish are more likely to sleep at night, but it’s not unusual for them to be active at this time. They generally prefer sleeping at night, but like any adaptable animal, they will change this routine if they’re hungry or scared.

Koi are more active during the day, sleeping at night when the sky is dark, and the water temperature has dropped. However, there could be a couple of things keeping your fish up at night. As we’ve discussed there are usually two reasons your fish are awake at night:

If this isn’t the issue and your koi are still sleeping during the day, this could mean a few things that include:

Since fish don’t have the same sleep requirements as humans, they can easily skip out on sleep and make it up later, if needed. A fish will only sleep for a couple of hours at a time, so it’s nothing for them to miss it for the opportunity to eat.

Do Koi Fish Sleep on Their Sides?

No healthy fish should ever be on their side, whether they’re awake or asleep. Koi fish sleep in an upright position, stably floating in a single spot, and it’s usually undetectable. So, if one of your koi fish is laying on its side, it’s very likely sick or dying.

This may look odd to you if you do see it, but it’s totally normal for a sleeping koi to remain in one spot for a while. They also sleep in groups, which is necessary for safety measures. Even weirder, since they lack eyelids, they also sleep with their eyes wide open.

Koi, and many other fish, will only lay on their sides when they are seriously ill. Alternatively, a dead fish may also float on its side for a time before rising to the surface belly up.

If your fish does not move after a long time, it may mean that it’s been affected by illness. Sleeping sickness can also affect koi, displaying itself with oversleeping and extreme lethargy.

As predominantly outdoor fish, koi really don’t need any more light or darkness than the sky already provides. This means you won’t need to add any light or shade unless it’s to protect your pond from the sun.

Indeed, your koi usually won’t need to be in the dark. Any darkness they need during the daytime is provided at the depths or in a shady spot in your pond. This is the same with many pond fish, including most species of carp like goldfish and koi.

Of course, there is one exception koi fish not needing light. When koi are kept in tanks, they will need to have special UV lights during the day. The UV rays help keep them healthy, as well as vibrantly colored.

As a side note, it’s very important that your pond is not in direct sunlight. The sun and warmer water promote algae growth, which will destroy the pond’s water quality in the long run.