Do you know that there are different types of moss plants suitable for an aquarium? Are you stuck with choosing the best option between Java and Christmas moss? Are you wondering why either option might be suitable? This guide offers a comparative evaluation that includes all you need to know about the Christmas Moss Vs. Java Moss debate.

Christmas and java moss belong to the same family, but the former grows best in cooler water. Java moss grows faster than Christmas moss, but the latter requires less light. But both can serve as a perfect alternative for each other.

Is Christmas Moss and Java Moss the Same?

Christmas moss is a common aquarium plant suitable for most aquariums. This plant got its name for its leave’s shape. The leaves take shape the appear like the Christmas tree; hence, its name.

Christmas moss originated from Brazil, but its popularity is now spread all over the world. It is usually one of the top picks of most aquarists because it carpets the tank. Besides this, it is easy to grow and has a host of several other benefits.

This plant has a unique shape, which is thick and triangular. It grows out flat and is easy to get. The overall growth requirements of this plant make it easy for most aquarists to have it in their tanks.

The water requirement for Christmas moss is usually light and warm. The plant will thrive best in a water temperature between the range of 18 and 26 degrees centigrade. Also, the best pH to facilitate the growth and development of Christmas moss is between 6 -7.5.

Warm water helps to accelerate the growth of this plant. But it would be best to keep it in mind to maintain the water at a fairly constant temperature.

Christmas moss will grow at a speedy rate to cover other substrates in the tank-like rocks and driftwood. This feature makes it suitable for covering the base of the tank. It also makes maintenance easier.

Christmas moss does not require trimming, but you can use it to control its growth. The only problem with this plant might attract algae growth. It often results when you don’t maintain the plant using appropriate requirements.

You can control the algae growth using algae-eating aquarium members like fish and shrimps.

It is extremely easy to grow, making it the top choice among most aquarists. Besides, it is extremely hardy and does not have complicated requirements for growth. In addition, it has a glowing green color, which it retains even during harsh conditions.

Java moss prefers moving water. So, it is best to attach it to suitable substrates like rocks in the tank. However, a high water current might sweep away the plant because Java moss does not have roots, only rhizoids.

The rhizoids of Java moss acts as roots that serve as a point of attachment. But rhizoids do not absorb nutrients. Only the stem and leaves of the plant help it with nutrient absorption.

Java moss will survive without hassle in almost any environment. This hardy nature explains why it is popular among many aquarists around the world. In addition, it can thrive at varying temperatures and pH ranges.

The most suitable temperature for Java moss is usually between 20 to 24 degrees centigrade. It requires any pH level that falls within the range of 5.5 and 8.0. Java moss can withstand water hardness up to 20dGH.

You can enhance the growth of Java moss by adding carbon dioxide, but it is not a compulsory requirement. Also, you don’t have anything much to worry about maintenance. All it requires is trimming at your own pace.

Java moss will remain attractive in the tank for most parts of its existence. But the only issue you might face is possible algae invasion. But the thrive of the algae is dependent on how well you maintain the tank.

A minute number of algae in the tank will not cause any significant problem. But an overgrowth will trouble your tank. 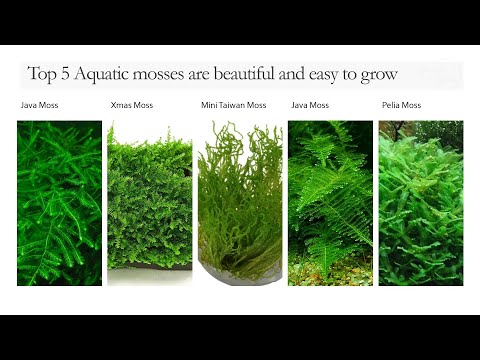 Which Moss Is Best for an Aquarium?

There are several options available in the moss family, but Java moss appears to be the best of them. It is one of the most popular options because it is hardy and easy to grow. In addition, Java moss is easy to maintain because it only requires trimming at your pace.

Java moss is fast-growing, and under suitable conditions, Java moss will give a decorative look to your tank. In addition, the plant adheres to various substrate surfaces in the tank without causing any nuisance.

Interestingly, Java moss is budget-friendly, and they are readily available. Besides this, it is suitable for most types of aquarium fish regardless of the tank or fish size.

Is Christmas Moss Easy to Grow?

Christmas Moss is quite easy to grow. It might not be as easy as most other aquatic moss, but it is not difficult either. Besides the fact that it does not have tough requirements, it can grow in varying conditions.

Christmas Moss does not need high lighting. Low or medium-light is enough to see the plant through optimal growth. Also, this aquatic plant does not require trimming; it will only carpet the ground and substrate surface in the tank.

Is Java Moss Easy to Grow?

Java moss is easy to grow, maintain and almost impossible to kill. It will passively attach itself to various surfaces in the tank, including gravel, rocks, and driftwood. This irregular branched plant is a suitable decorative element for aquariums.

Java moss has fast growth under suitable conditions. The plant will maintain its shiny green color even under harsh conditions. It can survive in almost any tank condition, even dark tanks.

This aquarium plant requires little or no maintenance aside from trimming. As a result, it barely grows to become unruly and wild. Instead, it maintains its decorative appearance almost through its entire existence in the tank.

Are These Moss Invasive?

Invasive plants tend to take over the aquarium. They barely stop growing and are kind of difficult to remove once you introduce them to the tank. Unfortunately, the uncontrolled growth of these moss can become wild and unruly.

They will keep spreading over every surface in the tank, including substrates like driftwood. They might not grow tall like other plants, but they creep on every surface they attach themselves to.

Nevertheless, these mosses retain their beneficial effects. Both will decorate the tank and provides hiding places for fish. Java moss will also absorb nitrates which would have contaminated the tank.

Is Moss Good for A Fish Tank?

Like most other beneficial aquatic plants, moss is one of the best additions you can include in your fish tank. Besides the fact that moss helps you decorate your tank and make it more attractive, it also has many other benefits.

Some of the main reasons why moss is good for your fish tank include;

1. It Improves the Overall Quality of the Tank

Adding moss to your fish tank will enhance your tank’s quality by helping with general cleanliness. It absorbs nitrates and other elements that might be detrimental for the members of the tank. Also, it takes up excessive carbon dioxide in the tank and releases oxygen, which is useful for fish and other tank members.

Another impressive benefit of moss in a fish tank is that it provides a hiding place for fish and shrimps. So, it aids the protection of smaller fish and vulnerable tank members from stress and predators.

Soft moss leaves are ideal for spawning fish. It provides suitable landing surfaces for the eggs, even for egg scatterers.

Although moss might not be on the list of some of the best fish food, it offers options for plant-eating fish. Many fish, particularly developing fry, loves to nibble on the plants they find around in their tanks. It prevents the fish from starving, particularly fish that cannot compete in the tank for food.

4. Increases the Oxygen Level of The Tank

Mosses are green plants. They use sunlight and carbon dioxide as raw materials and produce oxygen as a by-product in a process known as photosynthesis. Consequently, moss will produce oxygen in the presence of sunlight.

So, this plant will help you to increase the oxygen level of the tank. It will also improve the aeration and even distribution of the beneficial gas.

Aside from the above, other benefits of moss in tanks include;

Can I Make the Moss Grow Faster?

Of course, there are ways you can enhance your moss to grow faster. Although they have a certain predetermined growth rate, you can alter it slightly if genetics will permit. First off, ensure that the conditions in the tank are favorable for the plants.

One of the essential parameters for the tank is light. Use bright lights to enhance the dense growth of thin moss. Darker and thinner moss can still grow rapidly in the presence of dense lights.

Why Is Java Moss So Expensive?

A lot of aquarists have complained about java moss being highly-priced. Java moss might be more expensive than most other moss, but it is not as expensive as most other aquarium plants. The major reason for its high price is its easy growth and hardy nature.

Java moss will cope and grow perfectly under almost any condition. Besides, it is easy to handily and maintain even for beginners. It is a deal starter moss and can form a suitable base for other plants to grow.

Java moss is decorative in plants and provides a hiding place for tank members. Its presence in the tank will also offer several other benefits.

Nevertheless, java moss will offer a high value for money in the long run. It grows and spreads easily; so, you won’t have to keep spending on acquiring more starter plants.

What Is the Fastest Growing Moss?

Java moss is the fastest-growing moss. Unfortunately, it’s also one of the hardest because it can survive under varying conditions. It will even maintain its green color under harsh and almost unfavorable conditions.

Under suitable conditions, java moss will only take 3-4 weeks to reach full growth. Once the java moss establishes itself in the tank, it will accelerate to full growth with little or no assistance. However, you can introduce carbon dioxide and fertilizer to boost the plant’s growth rate.

Moss is a unique type of aquarium plant that offers decorative and other benefits in the tank. Christmas moss and Java moss are two of the most common members of the moss family. They have several things in common, including their growth pattern and requirements.

However, they have obvious distinct features despite their similarities. The main differences between the two include the growth rate and leave shapes. Java moss grows relatively faster than Christmas moss.

So, most times, the choice of the best option between java moss and Christmas moss is at the discretion of the aquarists. You can make decisions based on your needs and tank conditions. However, java moss remains most aquarists’ top choice because they are quite easy to grow and hardy.