Can You Buy Glofish In The UK? Glofish are genetically modified or transgenic and considered illegal to breed or own in the UK. There are loopholes to this, but you may end up with danios that are not exactly glofish. Why Are Glofish Illegal In the UK?

Glofish are genetically modified. The issue is controversial because selective breeding over the decades has produced multiple breeds of fish that don’t exist in the wild. Glofish are coveted for their bright fluorescent colors.

Glofish eggs are injected with traits belonging to fluorescent animals like jellyfish. Some say they have been dyed instead, but the company that manufactures them assures us that this is not the case.

Sarah Hugo, the Head of the GM Inspectorate has stated the following:

“The importation into, or the acquisition, release or marketing of any genetically modified (GM) organisms within the UK is prohibited unless a consent has been granted in accordance with Article 111 of the Environmental Protection Act 1990.”

The UK rules are strict. To own or breed genetically modified fish is against the law in the UK and EU. If you try to order them through the US, customs will confiscate them and you could face punishment.

What Happens If I’m Caught With Glofish?

The Environmental Protection Agency has inspectors that could get tipped off if someone notices your glofish or genetically modified fish. The owner of the fish store that sold you these fish will face harsher penalties.

Fines of £3,000 could be given out. If they find the fish can glow under ultraviolet light, then it’s evident that they have are transgenic. The worry is that they could be released in the wild and destroy the natural ecosystem.

Breeders could face up to 12 months in prison. The fine amounts or maximum prison sentences cannot be quoted in this article as current factual data. People have been caught and fined. 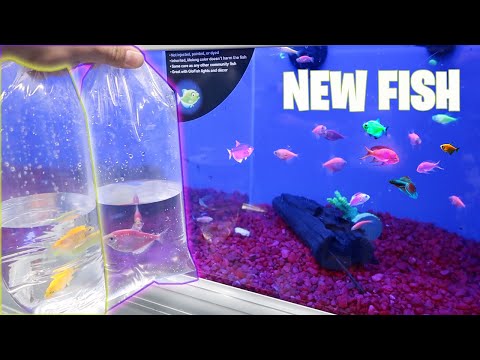 How Do I Get Glofish In The UK? Is There a Loophole?

Look, we don’t advocate breaking the laws in place. The fact of the matter is that there are always going to be people who find loopholes to bend the rules. They may even steer clear of all illegalities. You could purchase fish that are similar in appearance or name without buying glofish exactly.

The name “Glofish” is avoided, but there are shops in the UK that still sell danios with bright colors. The act of dying a fish could be considered cruel and will definitely limit its lifespan.

Other types of zebra danios that have traces of fluorescent colors on them could have been done so with selective breeding with an actual glofish.

Glofish are meant to be sold sterile, but this exact science that is stated by the manufacturer can be refuted by people who have actively tried to illegally cross-breed them with zebra danios.

Once their names have been changed, it will be hard for inspectors to track down all varieties or the selective breeders who may not be following the requirements of the law.

You may end up with dyed danios or selectively bred danio glofish without your knowledge and without repercussions. This is all controversial and it skates a thin line of what is legal or illegal. Tread lightly. Glofish are trademarked and sold through the manufacturer to wholesalers, suppliers, fish shop owners and direct to consumers. You can buy them from their website, but they will not ship to the UK.

You might be able to notice variations of danios that resemble glofish. Generations of selective breeding with a glofish and a danio or the controversial dying of fish could lead to what you’re seeing for sale in these “fishy” shops.

They may call them luminous fish or admit that they have been dyed, but not genetically modified. A dyed fish that looks like a glofish will not be able to pass this fluorescent color injected into them after birth to their potential fry.

The act of acquiring any fake glofish is not recommended by us.

It’s going to be very difficult to get your hands on actual glofish in the UK and you should probably stay away from this plan altogether. Look for vibrant danios or neon tetras that are bright in color, but not fluorescent under ultraviolet light.

EPA inspectors have the power to fine or imprison people caught breeding, selling or keeping glofish. Loopholes with changing their names or trying to breed them with regular zebra danios are attempted.

Dying danios to resemble glofish is also a practice that we don’t condone. It’s a hot topic issue, but we recommend you avoid getting involved.