Is your aquarium or pond full of hair algae? Do you want to know the easiest way to get rid of it? Keep reading this article to find out what eats hair algae and how these species can keep your pond or aquarium cleaner.

Hair algae is a species of soft filamentous algae found in both fresh and saltwater that grows on everything that doesn’t move. If it overgrows, it can quickly become a nuisance and a health hazard, so to combat this you should introduce things into the environment that eat the algae.

How Do You Get Rid of Hair Algae?

Overpopulation of hair algae can create a huge mess in your pond or aquarium. Not only will it smother what it grows on, but it also takes up precious oxygen for the other things living in your pond as well.

Luckily, there are numerous ways to get rid of hair algae. There are many ways to combat the growth of hair algae, the easiest being to add fish or other aquatic life that eats algae. Here are some other things you can do to remove hair algae from your pond or aquarium: 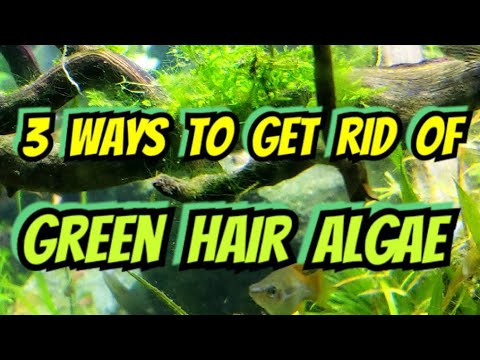 Algae is caused by a deficiency of the nutrients in the water. It can be caused by a number of these imbalances and if it overgrows, it will become bad for your fish and the water.

Normally, having a little hair algae in your pond or aquarium is actually healthy because it provides food for the smaller aquatic life. But when it’s not kept back by something to eat it, the algae grows all over the pond and essentially ends up suffocating the whole environment.

Though hair algae doesn’t harm your fish directly, it does create an unstable environment for them to live in. As we’ve stated, it will essentially suck the air right out of the aquarium if there’s too much. This will result in decreased oxygen, which can be fatal to everything in the water.

Here’s what hair algae does to its aquatic environment, whether it’s a tank or pond:

What Fish Will Eat Hair Algae?

If your pond or aquarium becomes overgrown with hair algae, you won’t have to worry. The simple fix for this problem is to introduce fish that eat algae.

Because there are different environments that hair algae can live, that’s what determines what fish you should get. Remember to research fish before getting them to make sure your pond is the right environment. Here are some algae-eating fish you can add to your pond:

In an aquarium, the environment is a little different than in ponds. Usually, the water’s much warmer, and obviously, it’s much smaller and therefore easier for hair algae to overgrow.
Here are some aquarium fish that eat algae:

What Snails Will Eat Hair Algae?

Snails are great at cleaning up the unwanted algae in any aquatic environment. In fact, you can find them in almost any natural body of water.

You may not have to add snails to a garden pond, since they’ll more than likely just show up themselves, similar to frogs and turtles. They usually make their way to your pond as eggs attached to birds, animals, and aquatic plants. An important thing to remember is to never just catch snails from the wild. Freshwater snails are carriers of the deadliest parasitic diseases.
They can pass them to you and the fish they live with, so be sure to get your snails from a reputable aquarium or pond supply. If you need to handle them, it’s best to do so with gloves or try not to handle them at all.

Aquarium Snails that eat algae include:

Another important thing to note is that when you’re introducing a new species to the pond, you will have to keep their population controlled as well. If there are too many snails, they’ll eat all the algae which is good, but then they’ll turn to the decorative aquatic plants that you don’t want to be eaten.

Do All Blennies Eat Algae?

Blennies are a group that represents up to 180 small fish species all over the world. You can find them in colder freshwater and even in the warm saltwater seas in tropical areas. Most of the species in the Blenny group do eat algae, but you won’t want to choose just any Blenny, because there are some carnivores mixed in this group.

Here are some Blenny Species that will eat algae:

Sea urchins eat algae, and they are often said to be better than fish at keeping a tank clean. Most species of sea urchin will eat all types of algae in their environment, even the ones you want around, such as coralline algae.

If your tank is the right environment, like saltwater aquariums or a reef aquarium, then a sea urchin might be what you need to clean up the algae. Using their mouths, they scrape the surface that the algae is growing on, such as a rock, and then gobble up the algae.

The species of sea urchin best known for this are:

Not only do shrimp eat algae, but they eat many other things as well. As a matter of fact, shrimp will eat anything they can get their hands on. 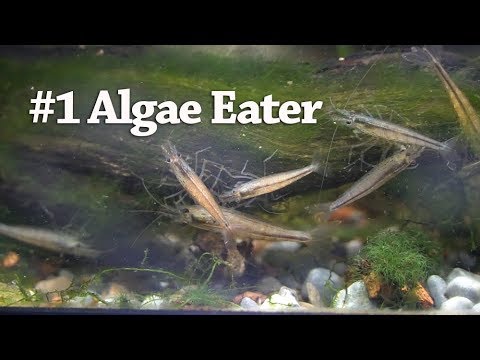 Shrimp can be a great addition to your fish tank. They eat algae, bacteria, and will even clean up after other fish by eating leftover food, and microorganisms like phytoplankton that decrease water quality.

Here are the best shrimp species for hair algae:

Some species of shrimp actually clean other fish, scraping the gun off their mouths and picking off the worms and parasites that might be affecting them. These are called cleaner shrimp.

Cleaner shrimp are a group of shrimp species that clean up after (and sometimes on) the other life in your aquarium. They pick the parasites, leftover food, and dead skin right off the fish. Well, if the fish lets them.

The best thing about having cleaner shrimp in your tank is that they find their own food throughout the tank. They eat a wide variety of things, and even pick your fishes clean.

Some of the best algae-eating cleaner shrimp are:

While we’ve listed so many algae-eating species, the best clean up crew really comes down to snails and shrimp. Over everything else, snails and shrimp are the most ravenous eaters of hair algae and are almost certain to eat all of it.

The best clean up crew that eats hair algae can range from fish, all the way down to microscopic organisms in your tank like bacteria. That being set, all bets are with snails and shrimp. Since algae makes up most, if not all of their diets, they are the best species to eat it up.

All of the species we’ve listed today will not only eat hair algae but other types of filamentous algae as well. A good mix of all of them will undoubtedly clean up any aquarium with an algae problem.