Preparing lava rocks for your aquarium requires two simple steps. Start by washing the lava rock before proceeding to boil it for disinfection. You can also use bleaching solutions to disinfect the lava rocks.

Considering lava rocks for your aquarium is a good step in the right direction. But using it the right way is equally essential. Start by proper cleaning and preparation of the lava rocks before safely placing them in the tank.

Can I Put Lava Rocks in My Aquarium?

Of course, you can use lava rocks for the aquarium without any hassle. Aside from the fact that it helps you beautify your tank, it also has loads of other benefits. Some notable benefits of using lava rocks include;

One of the most notable benefits of lava rocks is their ability to help you lower the nitrate level in a tank. It is because the holes and pores in most lava rocks contain denitrifying bacteria. These organisms help to regulate the amount of nitrate in the tank.

Denitrifying bacteria ensures that you have a normal nitrogen cycle in your tank. In addition, they provide a cleaner environment by breaking nitrate into nitrogen and oxygen. As a result, the oxygen content is highly beneficial for your tank members.

2. Holds Plants in The Right Position

Another impressive benefit of lava rock is its ability to help you hold plants in the proper position. It will hold the plants in positions that allow your fish to have clear air. Besides, it will also aid the beautification of your tank.

You can even use lava rocks to tie down plants.

Another impressive benefit of lava rock is its ability to provide hiding places for fish. They mostly have caved in their pores where fish can hide to rest and avoid stress. Also, these rocks are light, so you don’t have to worry about breaking your aquarium glass.

Lava rocks improve water clarity by helping you to clean the tank. They contain elements that can remove nitrate and other substances that might cause unclarity. Also, these rocks hold plants in the right place to improve clarity.

5. It helps to Beautify the tank

Lava rock is capable of enhancing your tank’s beauty. Aside from its appearance, it helps you to hold plants in the right position. Also, it aids organization and allows flexible layout in a fish tank. 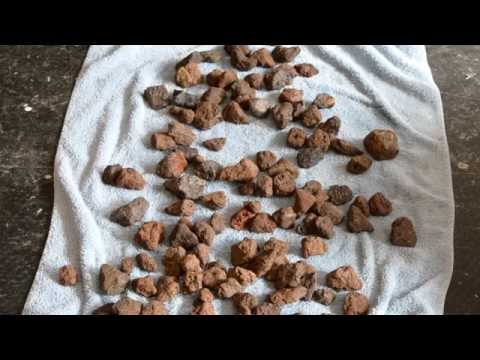 What Do You Put Under Lava Rocks?

One of the best materials you can put under lava rocks is mulch. Mulch is a material that helps to cover the landscape bed before placing the rock on top. This material has several notable benefits that aid the function of lava rocks.

Mulch can be anything from shredded wood to sawdust. It can also be straw, needles, or pine.

One of the notable benefits of placing your lava rocks on a mulch is to lower evaporation. Also, it will serve as an effective weed suppressant.

You can also consider plastics as an option to place under your lava rocks. But note that plastics are not environmentally friendly and might be too heavy to remove.

Landscape fabric will also work well beneath the lava rocks. Again, it will work better than plastics because it is relatively more environmentally friendly. But it might not work as much as mulches.

How Do You Clean Lava Rocks Before Putting in Aquarium?

Introducing a lava rock into the aquarium without prior cleaning might place your tank health at risk. Cleaning lava rocks before introducing them to your tank is vital for maintaining a clean and healthy environment. This process ensures that the rocks do not contain harmful bacteria that can affect your fish.

There are some simple but effective ways of cleaning lava rocks. Let’s find out!

Of course, you have to wash the rocks! All you need is a bucket full of water and a brush. Place the lava rock in the bucket filled with water and wash thoroughly with the brush.

The water will change color due to the thorough scrub on the rocks. Once you notice this change, there is no need to panic. All you need to do is change the water and repeat the process.

Consider rubbing two lava rocks against one another to get rid of sharp edges. These edges might pierce and harm your tank members if overlooked.

Next, proceed to dry the rocks. Drying does not require any special technique or material. Just leave the rocks under the sun and let them dry up.

Ensure that the lava rocks are submerged in the water you intend to use for boiling. In addition, it is best to use a large pot with a lid. These two cautions will improve your safety and enhance the process.

Only boil these rocks for 20 to 30 minutes. Boiling them for longer periods might cause the rock to crumble and break. After boiling, allow the rock to cool for at least an hour and wipe with a soft cloth before introducing it to the tank.

3. Use a Suitable Bleaching Solution

Bleaching is another way of disinfecting and sterilizing your lava rocks. It eliminates the risks of breaking and crumbling that might be attached to boiling. Nevertheless, bleaching is not as effective as boiling.

Bleaching is best for soft rocks that are not ridged enough to go through the boiling process. All you need is to soak the substrates in an appropriate bleaching solution for about 24 hours. It is best to use bleach in the solution ratio of 1:10 with water.

Do You Put Lava Rocks in A Fish Tank Before Water?

You can put lava rocks in a fish tank before water, but it can go either way. Putting lava rocks before the water makes it easy to keep the substrate in place. It will also help you to include other substrates in the tank without disturbance.

The primary essence of adding rocks before water is to ease arrangement. You can start by adding half of the intended water to the rocks. Next, include other elements and equipment before adding the rest of the water.

Nevertheless, if you have an existing tank, you might need to find a way of adding the rocks with the water inside. You can also remove half of the tank water to ease the process and replace it after you are done.

How Much Lava Rock Can I Put in My Aquarium?

Like most other elements, the number and size of suitable lava rocks for your aquarium are dependent on the tank size. The bigger your tank, the large the lava rocks require. The size of individual rock will also determine if you need more than one rock in your tank.

However, moderately sized lava rock is enough for a medium aquarium. You can consider adding more for larger tanks with more members.

Also, it is better to use a single big lava rock than using multiple small ones (depending on the fish’s size). Larger rocks are suitable for big tank members and will provide more hiding spaces. But in small tanks with smaller fish, you might even have to break large lava rocks into smaller pieces.

Note that the shape of lava rocks is a more crucial consideration than size. Start by getting rid of the sharp ends of your lava rocks. Then, you can consider gluing different rocks to create specific desired shapes.

Lava rocks will not attract termites, especially when they are clean enough. When you find termites around rocks, they are not after the rock. They mostly lurk after the sand around the rock.

So, there is no chance of rocks attracting termites if you wash properly and get rid of sand. Likewise, you can be sure of no termites if you leave no moisture or soil around the rock. Similarly, lava rocks will not attract other pests like ants.

Lava rock does not harm plants if you take all cautions before introducing it to the tank. Many aquarists use lava rocks to hold plants in the right position in an aquarium. They act as supports and sometimes as a base for growth.

But on rare occasions where certain plants have direct contact with lava rocks, it might be harmful. These rocks absorb heat during the day and release it at night. The heat released might cause some plants to overheat and deteriorate if the conditions are not favorable.

Some shallow root plants can extend their roots to the pores in lava rocks. Consequently, it is safe to say some plants can use lava rock as an alternative substrate for root attachment.

How Long Do Lava Rocks Last?

Lava rocks are useful in the tank as long as they are compact and do not crumble. They can last for at least two years in a fish tank, especially when the conditions are ideal. Note that lava rocks don’t spoil or dissolve.

But they can break and crumble after a while. How long the lava rock will last depend on the source of the rock and its initial use. Some lava rocks might have gone through seep and extensive heating in fire pits.

In summary, some lava rocks will last longer than others. You can make inquiries at the pet shop about how long it will last before purchasing.

Lava rock is pH neutral and does little or nothing to influence the pH of your tank directly. You will mostly find them red because of the iron content. But they do not contain calcium, which has a significant influence on the tank’s pH.

But the pores of lava rocks can contain certain denitrifying bacteria. These organisms will help to break nitrate into nitrogen and oxygen. The resulting gas is beneficial in maintaining a pH balance in the tank.

How Do You Glue Lava Rock Together?

Gluing lava rocks together will help you to hold them collectively in a preferred shape and size. It will also protect your aquarium glass from potential damage. All you need is a suitable aquarium glue that can hold the rocks together.

After washing and preparing the rocks:

Ensure that the glue you use is safe for your tank members and plants. One of the best options is silicone. Silicone does not have any side effects that will put your fish and plants at risk.

Generally, lava rocks are not poisonous except in few cases where some contain a high iron level. Therefore, lava rocks are safe, explaining why you can use them in the fish tank with little or nothing to fear.

Lava rocks are one of the ideal substrates in an aquarium. They have many benefits, including providing a hiding place for fish, improving water clarity, and denitrifying the water. They also aid aquarium plants and enhance the tank’s beauty.

But it is best to ensure proper preparation for the lava rock you intend to introduce to the tank. Wash them properly to remove possible dirt and parasites. Boiling or using bleach will also ensure that they do not contain harmful microorganisms.