Fish possess gills that help them harness the oxygen in water, in which there can be a problem if the water does not contain enough oxygen for the fish to live.

How to Increase Oxygen in a Fish Tank

If you are considering adding plants to your tank to increase the oxygen levels then take a look at this article I wrote about this.

How Do I Know If My Fish Tank Has Enough Oxygen?

It is vital to know when the oxygen level of water in the fish tank is low as it will save your fish from a lot of health issues.

Here are some signs that indicate there is low oxygen in the water in your fish tank.

1. Gasping At The Waters Surface

This behavior occurs at the latter stage of the tank’s low oxygen level, where there is no oxygen at the bottom of the tank but little at the surface.

Do not mistake this for feeding at the surface, as fish will gulp in the air when feeding. Some other fishes have organs that enable them to breathe at the surface as a natural behavior. 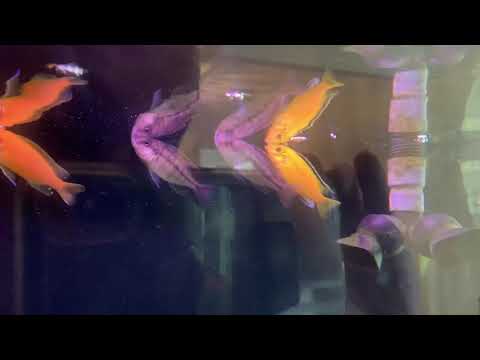 Aside from using the oxygen test kit, you can opt-out for a less expensive means as it will cost you nothing but your time, commitment, and concentration. You will notice a reduced movement in your fish as they will prefer to stay at the bottom of the tank.

They will also not feed more often and prefer to stay at a place as they try to conserve energy with the little oxygen they are getting.

The gill movement occurs at the more severe part of the reduced oxygen in the tank as they will start to exhibit labored breathing as the oxygen in the water becomes very low. They try to get enough oxygen by taking in more water through their gills.

You will notice the gills’ rapid movement and the flow of water from the fish, which indicates low oxygen levels in the water.

Using an oxygen test kit (Available to buy on amazon) is one of the easiest ways of checking if there is enough oxygen in your tank because it does not require you to monitor the behaviors or changes in the water or fish. Although it is a relatively expensive means, you can get a quick and precise answer from the test.

You only have to run the oxygen test using the kit, and you will be able to test to know if there is enough oxygen in the tank or not. 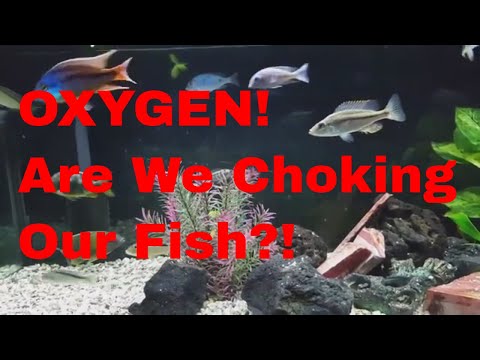 Low oxygen in the water is the likely cause of surface breathing in fish that do not exhibit these behaviors and do not feed at the surface. You will notice the fish taking in water from the surface as it contains more oxygen than those at the bottom. You will also see them, gasp repeatedly and spend the most time at the surface of the tank.

How Do You Oxygenate Water?

When there is no oxygen in the water, the fish runs out of essentials and eventually dies as oxygen is essential for fish to live. The only way to save your fish is by increasing the oxygen in the water. Here are some practical ways you can oxygenate the water in your tank;

An air pump (Available to buy on amazon) is an aquarium equipment that bubbles in the tank, bubbles that help maintain a high oxygen level. The aquarium air pump’s main objective is to sustain the tank’s amount of oxygen and serve as an ornament. It can also create a pleasant scene as the bubbles move up from the bottom of the tank.

One way you can increase the water’s oxygen level is by driving out the carbon dioxide in the water, which will cause the entry of oxygen in the water. To do this, you have to cause an activity or movement of water at the surface; it will cause a rapid gas exchange.

The air pump creates bubbles that burst at the water’s surface, causing enough activity to induce gas exchange in the water.

Aquarium air pumps cannot alone cause this activity, so you will need to use other equipment to help the air pump. Additional accessories like air stone, check valve, gang valve, air tubing, etc., are also useful in creating the needed disturbance at the water’s surface for efficient gas exchange.

If you can install them correctly, you will be able to maintain a steady and constant high level of oxygen in your fish tank.

The fountain (Available to buy on amazon) is also one of the aquarium equipment that maintains and sustains the water’s oxygen level in your fish tank. The fountain’s operation in the water causes enough oxygen to be in the tank keeping your fish in a healthy state.

When you notice that there is not enough oxygen in the fish tank, you can add the fountain to increase it.

The fountain raises the water from the bottom of the tank then drops it to splash at the surface, causing enough activity for the exchange of gases. You cannot always be around to cause disturbance of the tank using your hands, making the fountain very useful as it will continuously do it.

As this activity goes on, there will be a constant exchange of gases as the water gets rid of carbon dioxide and gets more oxygen for your fish.

3. Spray Water with a Hose

The main factor that causes the increase of oxygen in the water is the constant exchange of carbon dioxide for oxygen in the tank.

To ensure this constant exchange, you will have to cause a disturbance in the water molecules by ensuring the flow, movement, or splash of the water. You can also cause these activities using various instruments, including the hose.

To use the hose, you will have to connect the hose to a water source while you spray the water in the tank. The action of the sprayed water on the water’s surface in the tank will cause enough activity that will induce the exchange of gas. It will cause the water to expel the carbon dioxide and dissolve more oxygen for your fish to live healthily.

Adding plants to the tank is one of the best methods of maintaining the right amount of oxygen in your fish tank. You only have to add them to the tank, and you can be sure of having well-oxygenated water for your fish. Most live plants, especially green plants, will help you oxygenate your water, but you have to choose the plant compatible with your fish and suitable for your tank.

Plants are not like animals; they inhale carbon dioxide and exhale oxygen in the presence of sunlight, making them a perfect source of oxygen for your fish tank. As they breathe in carbon dioxide, they exhale oxygen that gets dissolved in the water for fish to harness using their gills.

On the other hand, fish take in oxygen and release carbon dioxide into the environment making the fish and plant a perfect combo. It turns out plants do more than beautifying the tank; they also ensure your fish’s life.

Does An Aquarium Filter Provide Oxygen?

Having a good filter will ensure an increase in your fish tank’s oxygen level, which is a good thing for your fish.

An aquarium filter should not be the only thing you use to add oxygen to a aquariums water.

Can I Turn Air Pump Off at Night?

You shouldn’t turn off your pump at night, especially if you have plants in the tank. In the dark, the plants start to consume the oxygen in the water, making the fish’s water dry. To avoid this, you would have to leave your air pump on over the night.

It is better to turn off your air pump in the day than turning it off at night.  An air pump will also use very little electricity so there is really no good reason for turning it off.

How Do Fish Get Oxygen to Breathe?

When the water passes over the absorption surface through the gills and mouth, it gets the water’s oxygen, and releases deoxygenated water back into the environment. The fish repeats this cycle as a bid for respiration.

Main Causes of Low Oxygen in a Tank

There are several causes of low oxygen in the tank; some are significant causes, while others are minor.

Why Do Fish Hang Out at The Top of the Tank?

The main reason fish hangs at the top of the tank is to get access to oxygen. When there is limited oxygen at the bottom of the tank, there is always more surface because many reactions occur between the surface and air. They will hang at the surface, breathing the water at the top as it contains more oxygen.

How Long Can Fish Survive Without an Oxygen Pump?

In still water, they can survive about two days without the use of an oxygen pump. However, you might not need an oxygen pump if there is enough water movement in the tank. Since the pump causes water movement, you can overlook its use if you have another source of movement.

Signs of Too Much Oxygen in a Fish Tank

When there is too much oxygen in the tank, you will notice a lethal gas bubble disease. This bubble comes out of the fish due to a solution that causes the bubble to be around the fish’s skin and eyes.

Make sure you have enough oxygen in your fish tank to ensure the healthy living of your fish. Increase and maintain a constant and appropriate oxygen level for your water, if not for anything, for the sake of your fish.

Fish are aquatic animals with structures and adaptive features that make them suitable for dwelling in their habitat. They are vertebrates with fins, gills, backbones, etc., with only a few exceptions.