Do you wish to get rid pesky Red Turf Algae? How can you make sure it doesn’t grow back? In this article, we’ll discuss how to remove and eliminate Red Turf Algae.

How to Get Rid of Red Turf Algae: Scrape, scrub and pick away at this stubborn type of algae to loosen its grip and manually remove it. Allow large Turbo Snails to mow down Red Turf Algae along with a few other algae eaters. Be careful with chemicals that may harm your tank’s ecosystem,

What Is Red Turf Algae?

Red turf algae forms a layer of grass over rocks and corals. They can get all over decorations and some equipment too. The thick and thin branches are short and cover areas like a turf mat, hence its name.

The color is vibrant and may look appealing if you can keep the growth under control. With excess nutrients, phosphates, lack of CO2 and too much lighting, red turf algae can take over your tank.

Red turf algae is especially able to survive under low lights as well. A blackout is not your best method to remove this pesky algae growth.

Yes. The turf growth is stubborn and hard to remove manually. You will need a lot of time and patience to pick at it. Red turf algae can take over the tank if not treated.

Removing red turf algae before it spreads is essential to a healthy and thriving aquarium ecosystem that depends on balance. Some red turf algae is tolerated, but an infestation becomes a nuisance.

Can I Use Hydrogen Peroxide On Red Turf Algae?

You will notice the color getting lighter and becoming orange or pale. Large Turbo Snails can also be employed to mow through the algae once is weakens.

How To Get Rid of Red Turf Algae From Reef Tank?

It’s time to roll up our sleeves and put on some gloves. We may have to enter deep into the tank and remove anything that has red turf algae growth on it.

If they cannot be removed, we’ll have to pick at it where it stands. Use a dental pick and clean the rocks or objects thoroughly.

Loosen the algae and take them out. You can also choose to remove and replace rocks instead of cleaning them. Employ some red turf algae eaters as well such as: 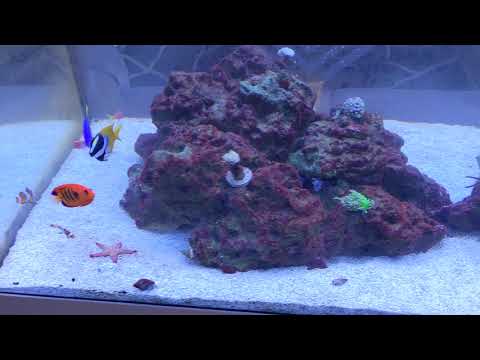 How Did Red Turf Algae Develop?

Red turf algae has adapted in special ways to survive in your tank. It’s stubborn and difficult to remove. The color is unique and appealing in small sections, but not when it takes over your tank.

The red color blends in well and predators of algae do not notice it as obviously as green algae. The color allows for better photosynthesis and can survive in low-lit environments as well.

Brown and green algae need to absorb significantly more light, allowing red turf algae to live in lower depths in the wild and in your tank.

How Do I Get Rid Of Red Turf Algae?

Here are our top ways to remove red turf algae. Here we go:

We opted to steer clear of using CO2 injections and Hydrogen Peroxide that work well with many forms of algae growth.

In this case, we needed to attack the low growing turf algae manually by picking and scrubbing. We loosened it, removed most of it and let these red turf algae eaters go to town on what was left.

The Turbo snail was the champion from the group and led the list above for this reason.

What Can I Buy To Remove Red Turf Algae?

It’s difficult to advise anyone to add any chemicals into their delicate ecosystem that they manage. You can speak to an expert at a local fish shop, but you may only walk out with an Algaecide.

You may also be told to use 10% Hydrogen Peroxide mixed with water. Chemicals are harmful to your marine and aquatic life. They can be dangerous to you as well.

Remove red turf algae covered items if possible and apply chemicals. Then wash them out with water and let dry before placing them back in.

Otherwise you can try using a brush or syringe to apply small amounts of chemicals to red turf algae growth in your tank carefully.

Will LED Lights Get Rid Of Red Hair Algae?

LED lights can help to reduce the amount of algae blooms by hindering the red output. These LED lights will target red algae in particular, but will not kill them off.

They have shown to be effective in preventing overgrowth and expansion of red turf algae. This pesky type of algae has adapted to survive under low lighting.

Nothing in our opinion beats scraping and picking away at it. It’s the most boring and tedious job, but the most effective.

What Is The Best Red Turf Algae Eater?

The Mexican Turbo Snail is the fastest red turf algae eater in our experience and observation. These slow movers act like lawn mowers instead of fish that swim towards and away from it with tiny little nibbles at a time.

Tangs are great and focusing on algae growth, but the Mexican Turbo Snail beats them all. Help them out by loosening the Red Turf Algae by manually scraping at it.

We hope the Red Turf Algae is controlled or removed altogether in your tank. Thanks for stopping by and come back soon to use our search bar in order to find plenty of articles about algae or other marine and aquatic life. Bye for now!