Do you notice the presence of some strange worms in your tank? Are you bothered about how they get there and how to eliminate them? Are you scared of your fish’s safety? Read on to find out all you need to know about detritus worms and how to get rid of them.

What Are Detritus Worms?

Detritus worms are one of the prominent members of the worm family. It is similar to earthworms and leeches because they belong to the same family (annelids).

Detritus worms are detritivores because they feed on decomposing matter, hence its name. You can find them in a fish tank because they feast on fish wastes and decaying plants.

These worms are usually white with a striking appearance. The body of a detritus worm appears like a string divided into segments. Some of these segments are brown, but the main body is white.

Looking at it from the bright side, detritus worms can act as natural cleaners. They will feed on various organic wastes in your fish tank. Nevertheless, it is not a good idea to allow the worms to thrive in your aquarium. In fact, it is best to eliminate all factors that support their survival. 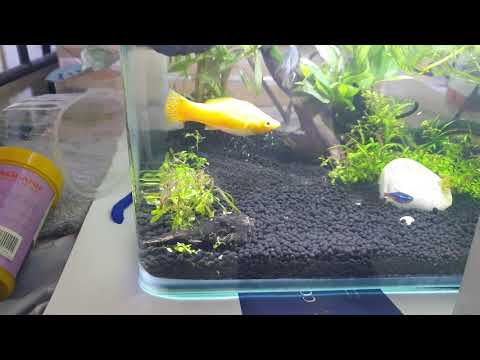 How Did They Get in My Aquarium?

One of the critical things that baffle aquarists is how these worms get into the aquarium. Sadly, detritus worms can get into the tank through various means. One of the most prominent ways is introducing new fish to your tank.

A new fish might carry detritus worms, especially when they are coming from an unhealthy environment. They can act as carriers for these worms that sneak into the tank. The worms can slip in almost unnoticed through this means.

Another way detritus worms can get into your aquarium is through live foods. Live foods like insects can also carry these worms and dump them in your aquarium. Some crustaceans, particularly sherry shrimps, are often implicated in this case.

How Do You Kill Detritus Worms?

Killing detritus worms is just another way of saying to get rid of them. Most methods work by making the environment unconducive for the worm’s survival.

The methods below will not only help you to get rid of detritus worms. It will also help you to prevent future infestation.

Replacing the water in an aquarium might be tedious. But it is one of your best bets when it comes to killing detritus worms. It involves a complete overhaul of the tank water.

You can proceed by placing your fish in a temporary tank. You can take the opportunity to clean your tank by scrubbing sand and stone. You can also clean or change the plant.

Hydrogen peroxide is one of the most helpful chemicals when dealing with detritus worms in your aquarium. It might sound a little extreme, but it is effective. All you need is to add adequately diluted hydrogen peroxide to your fish tank.

But there is a significant challenge with using hydrogen peroxide for this purpose. It can kill other aquarium plants alongside the worms. Some aquarium animals like snails, eggs, and larvae are also at risk of getting killed.

Using proper filters and a filtration system keeps the tank healthy. It recycles the water and can help to get rid of detritus worms. You can also clean the filter to ensure proper functioning.

Also, filters prevent the existence of decaying matter in a fish tank. So, it leaves detritus worms with nothing to feast on in the tank.

4. Clean the Gravel and Other substrates

If you have gravels, sand, stone, and other substrates in your tank, cleaning them can help to eliminate detritus worms. You can use gravel vacuum or other functional methods for this process.

You might not have to do any significant water change with this method. Cleaning the plants and scrubbing the face of woods can be helpful too.

If you are fond of feeding live or animal food to your fish, you might have to pause it for a while. These foods are appropriate entry portals for detritus worms. You can switch to flakes and other processed foods until you get rid of the problem.

Reducing their foods will limit the number of leftovers. These leftovers can decay in the tank; hence, providing detritus worms with needed food to thrive. Alternatively, you can ensure to get rid of bits for the fish.

6. Remove All Decomposing Materials from Your Tank

Detritus worms feed on decaying decomposing matters. Eliminating their food source only means their days are numbered in your aquarium. It will hinder their growth and prevent multiplication.

Maintaining proper oxygen level and circulation will also keep detritus worms at bay. It ensures the survival of living organisms in the tank. And it does not support decaying.

Will My Fish Eat Detritus Worms?

Detritus worms can create nuisance in the tank when they are overpopulated. But the good news is that most fish munch on the worms. It offers a tasty snack and a good source of protein.

Most species that find it challenging to eat detritus worms are small fish. The worms might not fit into their mouth. So, it makes it almost impossible to munch on them.

What Will Eat Detritus Worms?

Some fish species will gladly eat detritus worms when they find them in their tank. Loaches and similar aquarium members will also eat these worms.

Hot water will kill most worms. But it is not the best way to get rid of detritus worms in the fish tank. Increasing water temperature in the aquarium till it becomes hot will also affect other members.

Your fish and most other tank inhabitants might not survive hot water. So, it might mean you are killing the entire tank while killing detritus worms.

Bleach is a safe addition to aquariums. It might not kill detritus worms directly, but it can contribute to their elimination. It makes the worms visible enough for fish and loaches that might want to munch on them.

Do Detritus Worms Crawl on Glass?

Detritus worms can move on various surfaces, including glass. You will find them gliding on glass smoothly like snails without their shell. They can also move around in the tank by wiggling through pebbles.

The good thing about detritus worms moving on glass is that it alerts you about the presence of this pest in your tank. Their movement on glass is attention-grabbing. So, their activity will catch your attention and trigger prompt actions.

Are Detritus Worms Harmful to Fish?

Detritus worms might not infect or harm fish directly. But they are still a significant problem when they become populated in your fish tank.

First off, detritus worms thriving in your tank means poor quality. It means the nitrogenous and organic waste in the tank is approaching harmful levels. This level can be detrimental to your fish.

As detritus worms multiply in a fish tank, their demand for food and oxygen increases. This increased demand causes them to climb up to the tank’s surface. They can compete with your tank members for space and oxygen.

Are Detritus Worms Harmful to Humans?

Unlike most other worms, detritus worms are not harmful to humans. They cannot survive outside water. So, there is no way the worms will thrive on the human body.

Besides, detritus worms are not parasitic. Instead, they are detritivores, which means that they lack all parasitic elements that can make them harmful to humans. They don’t have suitable material of attachment to the host.

Are Detritus Worms Harmful to Shrimp?

Just as in most cases, detritus worms are not harmful to shrimps. So, you don’t have to be scared of your shrimps being infected or harmed.

Some reports suggest that certain shrimps eat detritus worms. But it is not an act that is common to all shrimps. So, it might not be easy to generalize the scenario until further research establishes it.

Detritus worms are similar to earthworms. They have thin and segmented bodies with brown-white color. The presence of detritus worms in aquariums is a two-faced sword.

On the bright side, detritus worms are beneficial for breaking down and eliminating organic wastes. But they cause nuisance when they multiply and take over the tank. Their presence is undesirable, and it means the poor condition of an aquarium.

Getting rid of detritus worms is simple. Ensure regular cleaning and maintenance of your fish tank. Carrying out frequent water changes and using suitable filters are helpful too.