Some amount of algae is normal in most fish tanks, but when you see algae that is short, thick, and nearly black, it’s likely you’re dealing with the dreaded black beard algae.

Once you see these stubborn algae, it’s important to treat them right away.

Treating Black Beard Algae With Hydrogen Peroxide in a Aquarium

Black beard algae, also known as BBA, is one of the most frustrating types of algae that can infest your tank. It grows on decor and plants, and can slowly kill your plants over time.

Thankfully, black beard algae can be treated with something that most people have right in their medicine cabinet: hydrogen peroxide.

Black beard algae can be treated with 3% hydrogen peroxide without causing any damage to your plants or fish, as long as it’s used correctly.

How Do You Kill Black Beard Algae With Hydrogen Peroxide?

Black beard algae can be killed by either spraying or soaking it in hydrogen peroxide.

Both spraying and soaking are adequate ways of treating the black beard algae, but spraying can be gentler on some delicate plants.

When you replace the treated item, the algae will still be present since it sticks so stubbornly, but it will now die off. 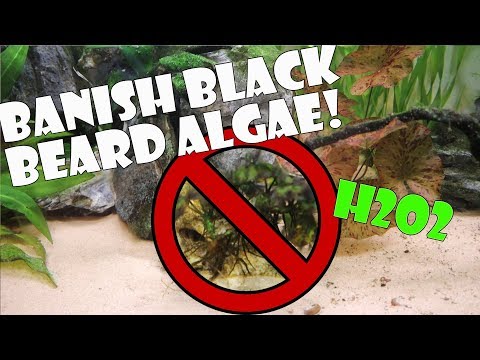 How Much Hydrogen Peroxide Is Needed?

When outside of the tank, you can spray the black beard algae or soak it in as much hydrogen peroxide as you need.