Are you wondering if Tiger fish are capable of attacking humans? Which type of Tiger fish is the deadliest?

In this article, you will find out if Tiger fish attack humans.

Do Tiger Fish Attack Humans? Tiger fish have razor sharp teeth and are aggressive enough to attack nearby humans, but will not actively pursue them. A Goliath Tiger fish is the largest of its species and has been witnessed to attack humans and crocodiles. The only tiger fish that is known to attack humans lives in African fresh waters and is known as the Goliath Tiger fish.

It belongs to the same family as the piranha and shares one main feature: razor sharp teeth.

A Goliath Tiger fish has 32 teeth that are close to the same size of the great white shark. They have been witnessed to attack crocodiles and humans in their native waters in the Congo River systems of Africa.

Where Are the Biggest Tiger Fish Found?

The largest Tiger fish is the Goliath Tiger Fish. It’s found in rivers and lakes around the Congo River Basin including:

The common Tiger fish species is smaller in size and incapable of attacking humans. They are found in the following regions of Africa:

Do Tigerfish Prey on Humans?

There is only one specific type of Tiger fish known to attack people. They cannot be considered as natural predators of people and we shouldn’t think of ourselves as their prey.

The Goliath Tiger fish (Hydrocynus goliath) has attacked and bit people in its native African waters around the Congo River Systems.

This is most likely due to a human being in the wrong place at the wrong time. A Goliath Tiger fish is looking for prey it can fit into its mouth.

At over 5 feet long and 100 pounds, it cannot swallow us and therefore isn’t looking to prey on humans. 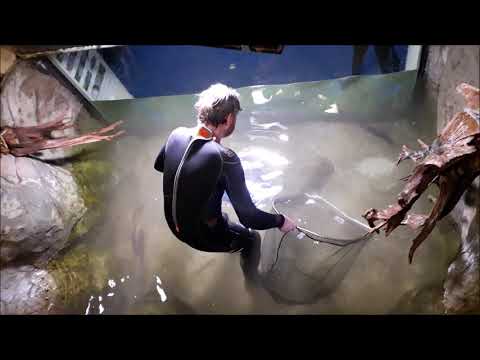 How Dangerous Are Tiger Fish?

Tiger Fish come from the same family as piranhas known as, Characidae or Characids. It’s best to categorize them in a group of fish that have sharp enough teeth to inflict damage on unsuspecting prey.

Unfortunate swimmers in African regions where Tiger fish are found may have encountered them and received injuries such as cuts or wounds.

The stripes on their body with teeth that stick out of their closed mouths mark their appearance from other fish.

Although a Goliath Tiger fish can grow up to 5 feet long, they are unable to eat a human whole. They are fearsome fish that swim in freshwaters and prefer to hunt in groups.

It would take a lot of time and energy for a group of Goliath Tiger fish to dismember a human into ingestible pieces. This is more likely to occur in a horror movie than real life.

Attacks have occurred, but the scenario of eating a human has not.

Is a Tiger Fish a Piranha?

The Characid family of fish contains over 1000 various species including Tiger fish and piranhas.

The locations of these fish are scattered in regions including:

How Do Tiger Fish Attack?

Tiger fish use their razor sharp teeth that are interlocked to aggressively bite down on prey. They hunt in groups to increase their chances of catching fast moving fish.

Their bodies are streamlined and muscular with lateral stripes running across. There are instances of African Tiger fish capable of attacking and catching birds in midair.

Can You Eat Tiger Fish?

Tiger fish are said to be an oily type of fish that is fairly bony. The fillet of a Tiger fish is close to resembling a tilapia, but much oilier.

A popular method of cooking Tiger fish is to mince the meat and combine them into patties or cakes and deep fried.

What Is the Deadliest Fish in the World?

Although the Goliath Tiger fish is deadly and ferocious, it is not considered the deadliest fish in the world. That honor goes to the venomous relative of the scorpion fish, commonly known as the stone fish.

A Goliath Tiger fish has teeth as sharp and nearly as long as a great white shark, but it is not venomous like the stonefish. An adult human can die in only an hour after being injected with the venom of a stonefish. Can You Keep a Tiger Fish as a Pet?

An aquarist would have to own an extremely large tank to house a school of Tiger fish. Each Tiger fish can grow up to 42 inches in length and would require being kept in a group to reduce stress.

Hobbyists who have attempted to keep Tiger fish as pets, started off with keeping them as juveniles but soon required commercial size tanks.

At this point, it would be practically impossible to keep a school of adult Tiger fish as pets.

African Tiger fish are extremely aggressive and prefer to hunt in groups. Their sharp teeth resemble that of their close relatives being the piranha.

The Goliath Tiger fish is the only species known to attack humans, but it isn’t clear if they were looking to hunt or if the unfortunate humans were victims of circumstance.

Nevertheless, if you are looking to keep a group of African Tiger fish as pets,  you would need an extremely large tank to do so.

Thank you for visiting Helpusfish.com. We hope you can take the opportunity to check out more of our informative articles on any other aquatic or marine life that you are interested in. Bye for now!