Do you enjoy clownfish so much that you would like to take care of many at a time? If you keep too many clownfish together, will they fight or bully each other? In this article, we’ll look at the ideal number of clownfish to place in your aquarium.

How Many Clownfish Can You Put in a Tank? Clownfish pair up, but you can choose to keep only one. Two is the best number because larger groups may lead to a paired group bullying the rest.

An enormous tank over 200 gallons could offer plenty of room for multiple clownfish, but average sized tanks should house two clownfish.

What Happens When I Add Second Clownfish?

Clownfish who live alone could demonstrate actions that seem like they’re lonely or depressed. They may sulk in a corner, refuse to eat or become stressed with erratic swimming patterns. Adding a second clownfish would be a great idea, but try to follow these three general rules:

Females are larger than males. Start with a female first and add a smaller male. The male clownfish will eventually submit to the female so don’t be too concerned about any initial hostility. Once he accepts his inferiority, the female will accept him and they will pair up.

Do Discus Fish Like Planted Tank? Blue Diamond Discus In a Planted Aquarium.

If you add a third clownfish, you may notice the pair picking on the new arrival and treating this clownfish as an intruder. Be careful with adding too many clownfish in tanks between 20-200 gallons.

Can I Put Different Species Of Clownfish Together?

There are no definite answers because they are always going to be people that defy the odds. The odds are in favor of different species of clownfish fighting each other in a tank. Clownfish are territorial and they could fight for the following reasons:

If you have a tank that is incredibly large, then your worries are much smaller than the rest of us. A 20 gallon tank to 200 gallons can display problems with more than two clownfish or different species of clownfish put together.

If there is only one anemone, you can be assured that the strongest pair will fight to protect their right to host it. If there are different species of clownfish, they will be aggressive to each other regardless, but having only one anemone in the tank may create havoc.

We are trying to simulate the water conditions in the wild ocean reefs where clownfish reside in nature. The water needs to warm and the parameters must fall in line with recommended degrees that are available to you with a little research. Clownfish may get agitated and take it out on each other if they are stressed in poor water conditions.

Plants offer safe spaces and hiding places. They also help to oxygenate the tank. Allow for more plants to separate your clownfish from territorial disputes.

A smaller clownfish can and will get bullied by larger clownfish. If one species is larger, they will know it and flex their dominance. The bullied species will regress and may weaken further. This will lead to illness or gradual death if they are not separated.

Maroon clownfish are known to be more violent than other species of clownfish. This is not always true, but it’s best to observe if any particular species is acting too aggressively. This outlier must be removed or given its own space within a larger tank to avoid further trouble. 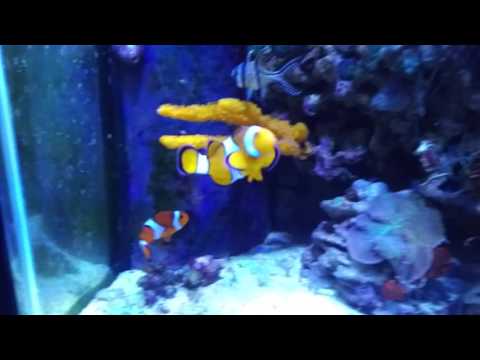 Can I Put Two Male Clownfish Together?

Two males together may not tolerate each other. There is no chance to pair or mate. They may turn aggressive for territory and adding a female into the tank may turn into a duel to the death to see who will have the right to pair up with the female.

What Happens When I Put Too Many Clownfish Together?

Clownfish want to pair up. A male must submit to the female and protect her eggs with all his effort. If he does a bad job of protecting the eggs, she will move on to another male. Too many males will fight for the chance to pair with a female.

Too many females will become aggressive towards protecting their territory because they are larger in size compared to males. Too many clownfish could be a disaster. A paired couple will pick on the rest of the clownfish who aren’t paired up. They may also bite your hand if you get too close!

It’s going to be tricky to add many clownfish in the same tank. Try to get the largest tank possible and add small clownfish together at the same time. These juveniles may grow up together, change sex and pair up. They could host their own anemones and share a tank together.

What Is The Minimum Tank Size For Clownfish?

20 gallons for two clownfish is a general rule of thumb, but this doesn’t apply to all species. Certain species would do better in larger tanks. Here are some suggested tank sizes for the following species of clownfish:

This is not an exact science, but these numbers are based off experienced clownfish caregivers who express that it’s better to go with a tank larger than 20 gallons especially for these species listed above.

Clownfish like to be in pairs. Some say a single clownfish could be fine in a tank with plenty of decorations, plants and an anemone to host. More than two clownfish becomes a challenge that some people wish to take on. They could raise a group of juvenile clownfish together and watch them change sex or eventually pair up in separate spaces in their larger sized tank.

We hope you choose wisely according to your tank size and level of challenge you wish to take on. Good luck and enjoy the lives of these wonderfully intelligent and fun fish!