Are you pressing your nose against the tank to see if your clownfish have teeth? Did you know that clownfish bite? In this article, you will find what’s going on and you may even be surprised!

Do Clownfish Have Teeth? Yes, they have teeth that are small, but effective. Clownfish have strong jaws too and are considered aggressive fish. Should you be worried? More often than not, there are simple measures to prevent them from biting. Clownfish are actually easier to keep than most fish and fun to enjoy.

Why Do Clownfish Have Teeth?

Clownfish are very protective. They use their teeth for protection. What are they protecting?

Clownfish are not kidding around when it comes to their space. They love to be hosted by natural or artificial matter in the tank. An anemone, coral or even a ceramic pot could be suitable hosts.

If another fish or even our hands go near their space, expect those teeth to take effect. They are small, but their jaws are strong enough to make an impact.

Did you know that a male clownfish is usually submissive and smaller than a female? Did you also know that the male clownfish’s job is to protect the eggs? If they don’t do a good job, the female with ditch them in the wild and look for another mate.

The male will aggressively protect the eggs before they hatch. They can and will bite you or anyone who gets near them.

Clownfish accept each other as a pair. Three is definitely a crowd. The two clownfish will defend their partner and make sure that intruders stay back. If the male has submitted to the larger female, they will not attack each other.

The objective is to protect their union from other clownfish who think they can interfere or join in. This is not the case and a quick bite from these little teeth will be a strong message to stay away from their relationship.

Which Clownfish Bite More Than Others?

First of all, all clownfish bite. Please do not expect to find the perfect clownfish that will never try to bite your hand when you’re cleaning the tank. This can and will happen when you least expect it.

Some say that it has never happened to them and they’ve never seen their clownfish bite. Unfortunately, no one has been able to breed clownfish to never bite. These people may just be lucky. Don’t worry too much because a clownfish bite shouldn’t hurt too much.

These three types of clownfish are known to be the most aggressive biters. Occelaris clownfish seem to be a little less aggressive and could be recommended for those in fear of these little biters. 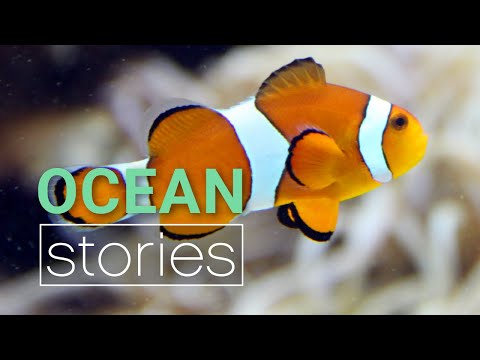 What Should I Do To Prevent Clownfish From Biting?

Let’s remember that we aren’t here to change the natural instincts of any fish. Clownfish will bite marine life that gets near their space, eggs or their partner. This is a part of their nature. We can reduce these instincts in some ways.

Two clownfish swimming peacefully together after they have paired is a serene scene to enjoy. They will busy themselves by sweeping up the sand, cleaning their space and swimming in unison. They will take care of their home and feel no need to bite.

Get a Larger Tank

A 180 gallon tank with other fish in there is usually enough room for the clownfish to carve out their own space. They will not aggressively pursue other fish to bite them if there’s enough room. They just want to have some space to call their own.

Sometimes we stick our hand in the tank for a quick cleaning. We don’t want to go to the next room to fetch our gloves and then it happens. SNAP! A little bite on our finger from our cute clownfish makes us curse.

Wear gloves to prevent these instances from occurring. Thankfully the pain won’t last long. Sometimes there will be a little bit of blood, but it shouldn’t be too deep of a cut. Their teeth are just not long enough.

If the clownfish fully sunk its teeth into your hand and clenched its jaw, it will feel worse than sandpaper. Consider the feeling of multiple pin pricks and you’ll get an idea of how it feels without trying it for yourself. Keep your gloves on!

Get ready for this one. Research teams and a popular university in Virginia, USA (VCU) were able to closely examine the mouths of clownfish. They were mostly interested in the sounds that come out of clownfish.

The snapping of their jaws and the banging of clownfish teeth has been determined to be a form of communication between them. Teeth talk? It looks like they are using their teeth for more than just keeping intruders away! What Is the Worse Thing That Can Happen From a Clownfish Bite?

If clownfish bite each other or another fish, it can leave an open wound. The wound could get infected and cause disease. This would unsightly and dangerous if not not treated.

If a person overreacted to a clownfish bite and suddenly jerks their hand away, then it could lead to some serious damage. Knee-jerk reactions are common for humans when threatened. We may fling our hand back and hit the light, filter, air pump or even cause the tank itself to break or crash.

This would definitely be the worst thing that could happen from a bite or the fear or getting bitten. Once again, gloves will prevent this and give you the confidence to feel protected from their little teeth.

Clownfish have teeth and they will bite. They do this for protection and their aggressive instinct to defend their territory. Please wear gloves when you clean a tank with clownfish to keep your hands safe from clownfish bites.