Are you wondering if you can put clownfish and goldfish together in the same tank? Would you like to know if they’ll get along or if one will die? In this article, we’re going to get very real about whether or not this is actually possible.

Can You Put Clownfish With Goldfish? The clear answer is no. Goldfish live in freshwater and Clownfish are saltwater fish. They require different water temperatures as well.

This is not going to work. There are other reasons why people would put a goldfish with a clownfish. Let’s see what’s going on. Do Clownfish and Goldfish Live in Compatible Habitats?

As you can tell from the picture above, the scene is very fake. The natural habitat of a clownfish does not resemble that of a goldfish. They are not going to live together in the same tank.

A natural environment of a goldfish involves colder water temperatures. A clownfish is a tropical fish that needs warmer waters.

This is obviously not the biggest concern. The problem is salinity. Clownfish are definitely going to need saltwater to survive. 1.021-1.026 are healthy salinity levels for a clownfish.

What Will Happen To Goldfish In Saltwater?

Goldfish have been able to survive saltwater for very short periods of time. They do it out of necessity. If they need to relocate from one to another, it may be a necessary need to travel through saltwater.

What will most likely happen is that they will die. They will become food for the other fish in the tank.

Clownfish are not picky eaters. They are carnivorous, but they aren’t carnivores. They will enjoy meat more than plants, but we balance their diet with plant matter to maintain optimal health.

We feed shrimp, bloodworms or fish meal to clownfish. A pellet or a flake containing goldfish meal will be eaten up by a clownfish. A clownfish will also eat small pieces of goldfish if we give it to them.

Goldfish are not a part of a clownfish’s staple diet. They do not live in the same environment and wouldn’t be introduced to each other in the wild. 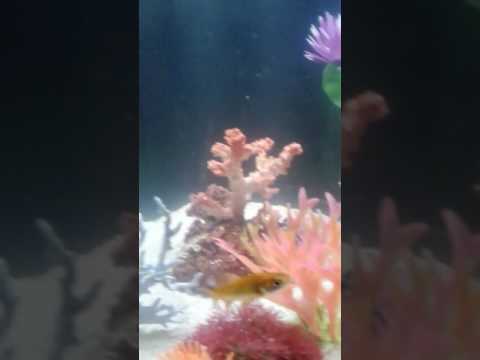 Would Someone Want To Put Clownfish and Goldfish Together?

The answer isn’t simple or smart. Experimentation occurs with fish keeping. There are companies that we wish not to name who are trying to create solutions to make this happen.

They claim that with their tanks and solutions, they can keep goldfish with clownfish together. This is not advocated or proven to be true by reputable third parties.

Clownfish are famous. Goldfish are popular. The former was elevated into stardom from a movie that entertains children and adults to this day. The latter has been referred to in countless situations. Those who have the memory of a goldfish will have already forgotten the first word of this sentence.

Would A Clownfish Survive in Freshwater with Goldfish?

No way. The goldfish will most likely not harm the clownfish. The clownfish will suffer after a short while. This is not recommended.

A freshwater dip is a common method to alleviate symptoms of velvet or brooklynella in a clownfish. It happens for mere seconds and leaving them in freshwater for longer periods of time would be cruel and deadly.

Clownfish are aggressive and territorial. They will get along with other fish if there’s enough space and no threat of competition. They won’t intrude on the cave dwellers such as Basslets.

Goldfish are freshwater fish. Clownfish are saltwater fish . They are not going to intersect in our fish communities. This is uncommon and just silly. Some people or companies still try to make it happen, but it isn’t recommended.

A clownfish would eat goldfish meal or pieces of goldfish it that is served to them as a snack. Try to introduce damselfish instead of goldfish to get on with clownfish in the same tank. There are plenty of other fish species that will coexist with clownfish. A goldfish is not one of them.