Has your clownfish started to shake recently? Is it because they’re dancing or is there something more serious going on?

Below, we’ll dive into this topic and shake out the facts.

What Does it Mean When Clownfish Shaking?

Clownfish shake to communicate with their partner. They like to stick with their mate which is essential to their reproduction and survival.

Let’s look into the reasons why they shake to communicate. 6 Reasons Your Clownfish is Shaking

Communication is the main reason why your clownfish is shaking. This is normal and very positive. We should uncover the reasons why and see if there are any negative reasons for this shaking behavior.

Shaking tends to be observed more by male clownfish. They are usually smaller than their female counterparts and less aggressive. They are submitting to their female mate by shaking.

This act of submitting will make it easier for them to become potential mates. The male must submit or else the female will move on or become even more aggressive.

Female clownfish want to show their dominance and demand the males to become inferior to them. Females also shake, but they do it in an aggressive attempt to exert their superiority in the relationship.

The shaking could be considered as a sign of flirting. It’s a courtship technique and it’s perfectly fine to observe this. There’s much that we don’t know about the mating patterns of other species. We’re still trying to figure out our own!

A female may shake just before they drop eggs. The shaking may help to get them out. Watch closely and see if you can witness this essential part of the reproductive cycle.

A clownfish could be showing signs of stress from being bullied. Make sure they are not being nipped at to the point where there is damage to their head, body or fins. If they are being bullied to this point, the abrasions could cause infections that could harm their health.

Maybe it isn’t quite shaking that you are seeing. It could be frantic movement or hyperactivity that may actually be precursors to a disease.

There are videos of normal shaking patterns of clownfish online. Take a look and see if your clownfish are shaking in this healthy and communicative way. 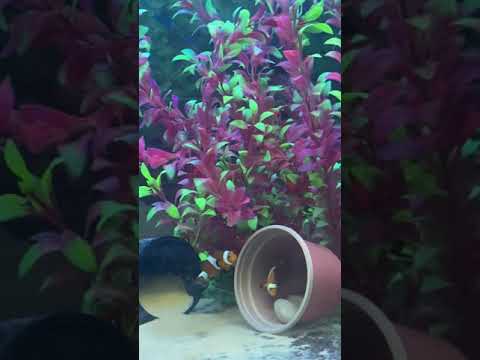 How to Reduce Clownfish Shaking

The shaking will reduce itself once the female has accepted the shaking male as her new mate. He is trying to submit to her by shaking. She may require it to go on longer as part of the mating process.

Give it time and see if there are any aggressive bullying behaviors that need to be addressed. The other option would be to remove the pair if the female is being too pushy and not wanting to accept the male.

Why Is My Clownfish Shaking its Tail in the Sand?

Your clownfish is acting like a clown and being silly! Just kidding. The main reason for this is that they are trying to clean up their area. They use their tail as a broom to sweep up from time to time.

Actually it’s quite normal and it’s funny to watch. This is part of the reason why clownfish are so much fun to have in our aquariums.