Are you seeing two snails stuck together for a long period of time? Are they stuck, stressed or mating? In this article, we’ll look into the topic of snails sticking together.

What Does It Mean When Two Snails Are Stuck Together? Snails mate for 1-12 hours at a time where they look stuck to each other. Sometimes it’s accidental when one snail is crawling over the other in a completely oblivious way. Are My Snails Fighting or Mating?

When you see snails on top of each other, it may look funny. Are they in each other’s way? Are the snails fighting? Snails can try to mate without even knowing the gender of the opposite snail. Sometimes they are hermaphroditic, asexual or simply unaware of their partner’s ability to mate with them.

Your snails can be trying to mate, but are unsuccessful and just looking goofy. Other times, it is a success and you’ll notice a clutch with a baby snail growing inside of it. You can have many snails overnight without knowing it!

Why Are My Snails on Top of Each Other?

The typical answer as to why one snail is on top of another is simply because it is trying to mate with the one below. This process could be over in a hour or up to 12 hours.

Some aquarists attest that they’ve seen their two snails stuck together for a couple of days! That’s quite the mating session! Here are some other possible explanations:

Some of the possible reasons are downright silly. Snails can be silly sometimes. They are known to be unaware of the other at times. Using one as a bus to take the other around is commonly found in tanks.

The usual instinct is to mate, but once a snail takes hold on top of the other, it can simply turn into a free ride. Another opportunistic reason is that one snail found some algae growing on the other and climbs aboard to pick at it.

Why Is My Snail On My Other Snail For So Long?

At first, your instigating snail is looking to mate. This snail is unsure of the situation, the gender or willingness of its potential mate. They may stay attached until they figure out if they are a match for each other. This could last for up to 12 hours.

You might see a male mounting a male and a small tussle occurring over the mismatched pair. If one turns over, you can step in and help it right itself. 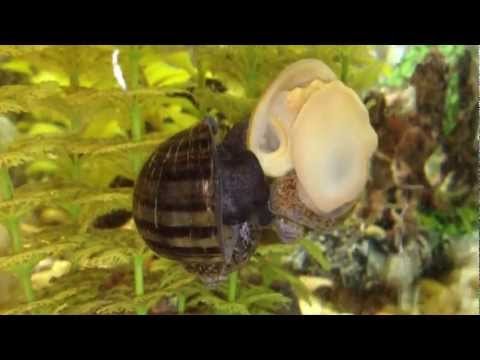 Are My Snails Harassing Each Other?

The perpetrating snail who is trying to mount the unwilling snail below may end up falling off after hours of persistence. The snail could end up being harmed or breaking its shell.

The snail below could also fall victim to stress or be crushed by the hours of handling a snail above. These cases are rare and it’s best to leave them alone to figure it out for themselves.

Stressing your snails by actively interfering may only prolong the matter or escalate the harassment. You can remove them if you wish. The entire scenario becomes comical for the most part and not very dangerous in many cases.

The snail who is on top is trying hard to mate with the one down below. If the female carries the male for hours on end, it should be a cause for concern. She is going about her business while he is trying to fertilize her eggs.

There are no mating rituals besides this. The female must have eggs to fertilize or the process will last hours and become unsuccessful. You may find the snail above rescinding into its shell during its effort to fertilize the eggs that may or may not be present.

What Should I Do With Snails That Are Stuck Together?

The best answer is do nothing. Watch, observe and laugh if you wish. Snails shouldn’t fight or harm each other during this time.

You may run the risk of pulling at their attached organs or muscles and injuring them. If you don’t want them to mate, you may have to remove the male on top. It’s easier to wait for the clutch and vacuum up the eggs when cleaning up the tank.

Are My Snails Trying To Mate?

If one snail climbs aboard the other for a long period of time, they are most likely mating. The male will crawl on the back of the female and will usually try to get himself over the right side. The female will seem to not care about it and continue scavenging during this time.

Sometimes you snails are not mating because they haven’t realized that they are the same gender or there aren’t eggs to fertilize. Why Are My Snails Grouped Together?

Snails like to group together or crawl on each other from time to time. They may not be mating. In fact, it’s common for one snail to completely disregard the presence of a snail in front and simply climb over it like it was an obstacle in its way.

Sometimes snail clump together to fight off warmer temperatures. They stay together and climb to higher levels on plants or other decorations to avoid being dehydrated.

Snails are funny little creatures sometimes. It’s a twisted form of pleasure to laugh at two snails contorting, climbing, tangling up and sticking together for many hours in the pursuit to complete nature’s most common instinct outside of eating and sleeping.

Your snails are most likely trying to mate and this act of being stuck together could last 1-12 hours or sometimes even longer. It’s easier to scoop out or vacuum the eggs that result from successful mating rather than trying to remove them from each other and risk hurting their muscles or organs.

Thanks for visiting HelpUsFish.com and we hope to see you again for another article on Snails or any other aquatic life that interests you.