Can Snails Handle Ammonia? Snails are more tolerant of ammonia spikes compared to most marine life. You can cycle a tank with snails because of their hardiness. How Much Ammonia Can A Snail Handle?

Fish and snails produce ammonia all the time in your tank. It’s important that the beneficial bacteria through proper cycling processes the ammonia and nitrites that your marine life produces.

Most aquarium snails can handle ammonia readings of 1 ppm. 3-5 ppm readings of ammonia are extremely high, but since it’s common to see snails included in tank during a cycle. They are hardy enough to withstand it while beneficial bacteria colonies disperse and convert ammonia into harmless nitrogen compounds.

When ammonia levels get high, a snail will hole up inside its shell, climb out of the water or stay above the waterline. it can also burrow inside the substrate to avoid toxic ammonia levels.

Can I Kill Snails With Ammonia?

You may need ammonia levels at 5-10 ppm or higher if you want to kill the snails in your tank. This method is not as practical as manually removing them. You can also try starving them by removing any debris or algae.

Snails and most other invertebrates are sensitive to fish medications. It would be easier to kill a snail with various types of medications intended for sick fish rather than raising ammonia levels. By far, the best method is to simply scoop them out of your tank.

Aquatic snails are omnivores. They are not picky eaters and will be commonly seen eating up dead plant matter or any other debris at the bottom of the tank. All leftover foods and decaying plants produce ammonia.

Snails are tank cleaners by removing the debris that may cause ammonia spikes. If you have a tank with many live plants, they will surely release dead plant matter that sinks to the bottom. Your snails will consume most of this to prevent ammonia levels from rising. 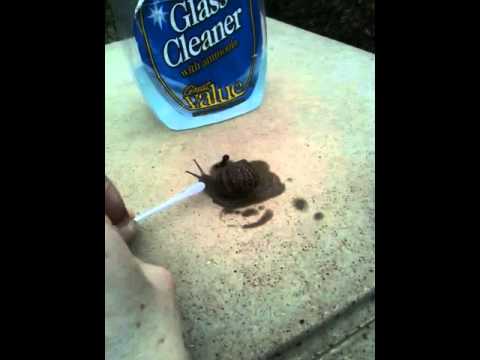 Do Snails Cause Ammonia?

Dead or decaying snails must be removed from your tank before they end up spiking ammonia levels. If you choose to feed bits of snails to your fish, remove them from their shells. If the shells are crushed in the tank, they will release a large amount of unwanted ammonia into the tank.

Why Does Ammonia Spike In An Aquarium?

When your tank is cycled, the beneficial bacteria helps to break down nitrites and ammonia into nitrogen. If the nitrogen cycle breaks, the tank is susceptible to spikes in ammonia.

All new tanks must be cycled before introducing your marine life. You can do so with snails included because they are hardy and won’t die during the cycling process.

Are My Snails Stressed From Ammonia?

If you are concerned about high ammonia level stressing your snails, look for the following signs:

If your snails perish in your tank, remove them right away or the ammonia levels from their decaying bodies and shells will make things worse.

Can I Crush Snails In The Tank?

You may wish to remove nuisance snails that multiply or get out of control at the bottom of the tank. With enough pressure, you can crush them with your hands. If you do this in your tank, you will raise ammonia levels.

Ammonia stores up in the shells of snails and will explode like a bomb if you crush them in the tank. Use a scooper or small cup to pick them out of the tank and remove them safely.

Snails can handle ammonia levels better than most fish and invertebrates. There is always a limit to how much is too much. A 1 ppm reading of ammonia is going to be fine for your snails.

A cycling with snails included will also work, unless you see your snails trying to climb out or stay above the water line. Do not crush snails in the tank and remove their decaying bodies if they die.

The ammonia they release from their waste contributes to the rise in ammonia. Make sure your nitrogen cycle is not broken or your beneficial bacteria will not be able to process the ammonia created by snails or other marine life.

Thanks for visiting HelpUsFish.com for another article on Snail that we keep in our aquariums. Check out more of our articles on the variety of marine life we research and keep. Bye for now!