Are you concerned about your snail losing its shell? Will it survive without one and is there anything you can do? In this article, we’ll find out if a snail can live without its shell?

Can a Snail Live Without Its Shell? Sadly, no. If we can’t live without our skeleton, then a snail doesn’t have a chance to live without its shell. The body of a snail is attached to the shell. If it lets go of it, the snail is most likely dead.

Should we make sure you’re not mistaking a slug for a snail? Let’s see how much more we can discover about this topic.

Which Snails Can Survive Without Shells?

There are rare occasions where pond snails have lasted a while longer without their shells, but this cannot mean that they were healthy.

Slugs resemble snails and they seem to live life without a shell. All snails need shells for protection and to keep their bodies moist.

Slugs evolved from snails, but the fact is that many of them were also able to develop a thin shell under their skin.

Can a Snail Survive With No Shell?

The result of a snail moving around without its shell is a sad one. This snail is suffering and doesn’t have much time to live. The shell is a necessary part of its physical structure; much like our bones.

Minor holes or damage to certain parts of its shell could be repaired, but a complete removal or loss of its shell is fatal. A snail needs its shell to remain moist.

Without moisture, a land snail has no chance at survival while an aquarium snail will not be able to protect its organs or itself from a predator that will will easily scoop it up in no time at all.

Can A Snail Regrow Its Shell?

A snail cannot regrow its own shell once it has completely lost its original one. Minor injuries, holes and scrapes can be repaired with time and your help.

Add these items to help your snail repair its shell faster and to possibly make it harder than it was before:

The mantle (tissue protecting the organs) can secrete extra calcium and protein to repair parts of the shell.

Unless it has been completely torn out of its root or declawed (sadly) like a feline in captivity, the shell, much like a nail, should be able to grow back in certain areas that were broken. 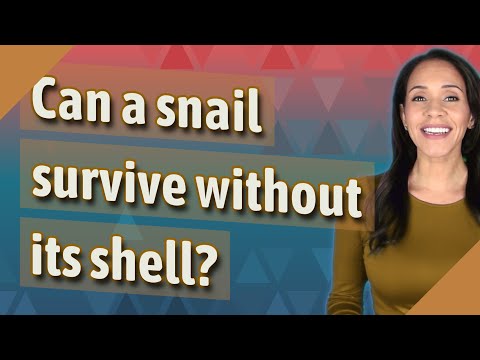 How Do You Save A Snail Without A Shell?

You may not be able to save a snail that has completely lost its shell in its entirety. Damaged parts of a broken shell could receive some of your assistance.

Can A Snail Turn Into A Slug?

It would be great if a snail without a shell can simply transform into a slug and continue living. Unfortunately, this is not the case.

Slugs were able to evolve and adapt to life without a shell over millions of years. Most slugs internalized the shell and now have it contained within their bodies.

If snail cannot pull itself into its shell, it will not be able to receive the much needed protection and moisture it needs to survive.

A snail without a shell may resemble a slug, but will soon dry out and perish.

Why Do Snails Have Shells?

Snails haven’t kept their shells for over 500 million years as a fashion statement. They have them the same way we have bones. The shell is simply vital. Here are some reasons why snails need their shells and cannot survive without them.

The shell is an integral part of a snail and we cannot underestimate its importance in keeping a snail alive. Why Don’t Slugs Have Shells?

Slugs evolved to lose their external shells while creating internal protection. They actually have a thin shell inside their bodies.

There are more reasons that researchers claim makes it easier for slugs to live without shells. Some of which are listed below:

A snail is not going to be able to survive without its shell. If the damage on the existing shell is repairable, you may be able to assist by providing more calcium through food, a cuttlebone or liquid calcium to help speed up the process.

Unfortunately if a snail has lost its shell completely, there is not much any of us can do about it at this point.

Thanks for visiting HelpUsFish.com and we hope to see you again for another article on Snails or any other aquatic life that interests you.