Are you looking to stock the smallest sized Arowana in your tank? Is there even such a thing? In this article, we’ll find out which Arowana is the smallest.

What Is The Smallest Arowana? An Arowana is going to be nearly 3 feet in captivity and up to 4 feet in the wild. Jardini Arowana may stay around 2 feet, but they are not as flexible and require a larger tank for them to turn around. Jardinis are also very aggressive.

How Big Is An Average Arowana?

These freshwater beasts grow up to 4 feet in the wild. A captive arowana will grow up to 3 feet. An average weight for arowana is about 10 lbs. or 4.6 kg. Wild arowana can be 15 lbs or 6.8 kg.

The minimum tank size should be 150 gallons, but most arowana keepers recommend 180 gallons or larger. Black and silver arowanas are more common with the former being more expensive.

Asian arowana are highly coveted for their shine, but many countries do not allow them to be imported from their native continent.

How Small Is The Smallest Arowana?

The smallest arowana is still quite large. The Jardini Arowana is native to Australia. Most Jardinis reach a maximum length of 24 inches, but some may grow up to 30 inches.

Although they are shorter, Jardini or Jars are the least flexible from all arowana. They will need the same amount of space as their silver or black arowana relatives in order to turn around and swim comfortably.

Jardinis are territorial, aggressive and usually kept as a solitary fish. You can try to keep bottom dwellers with these arowana, but there are no guarantees that they will let their tankmates survive. 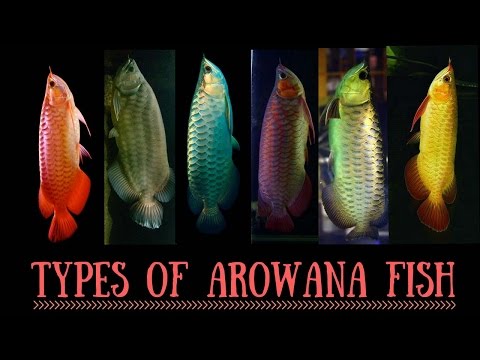 How Can I Keep An Arowana Small?

The tank size, diet and water quality will determine how large your arowana becomes. Trying to stunt their growth would be considered cruel in most cases.

A smaller tank will increase the amount of pollutants and decrease oxygen levels. Nitrites, nitrates, ammonia and phosphates will build up and poison you arowana slowly. This will surely stunt its growth and shorten its life.

You can choose to keep baby arowana until they grow to 1-2 feet and try to exchange them when they become too large for you. These fish are sought after by fish keepers with large tanks that are ready for a 5-15 year commitment. If this isn’t you, please consider other options.

Are There Any Smaller Fish Similar To Arowana?

The African Butterfly is the closest thing to a dwarf arowana. A true arowana dwarf doesn’t exist. The similarities are as follows:

An African Butterfly will not grow more than 5 inches. They are not tolerant of tankmates who prefer to swim at the top like them. Bottom dwellers or mid level swimmers may work for larger tanks.

Which Arowana Is The Best?

It’s very difficult to pick the best arowana based on subjective opinions. The most common is the silver arowana. The most expensive is the Golden Arowana from the Asian Arowana family.

The Golden Arowana makes it to the top of the list because it is highly sought after. Native to Bukit Merah in Indonesia, this fish has scales that shine to the 6th row. It is considered to be the most expensive fish to stock in an aquarium.

It’s illegal to import the Golden Arowana in many Western countries. Asian beliefs and traditions indicate that this particular species brings good luck and fortune. What Is The Minimum Tank Size For Arowana?

The arowana is a surface swimming fish. It tries to agitate the water’s surface and gulps air to pass it through to its swim bladder. This fish needs a long tank to cover the distance it needs for active swimming and oxygen.

The width and length or more important than the height of the tank. You may start with a 150 gallon tank, but soon realize that anywhere from 180-300 gallons is more suitable.

There really isn’t such a thing as a small arowana unless it’s a baby. You can choose to keep them until they grow larger and trade them to your local fish shop or privately if you can’t handle their rapid growth.

The Jardini Arowana is the answer for the smallest arowana, but it won’t help you much. This is because the Jardini is not flexible and requires the same amount of space that larger arowana need to comfortably swim and turn around.

It’s best to stock your tank with African Butterfly fish if you are looking for a smaller substitute to the arowana. Please make sure your tank size of a minimum 150-180 gallons can support the full growth of a 3 foot long arowana, if this is your preferred option.

Thank you for stopping by at HelpUsFish.com for all your informational needs concerning the fish you wish to keep in your aquarium. We have plenty of articles on a wide variety of marine life that may also pique your interest. See you again soon!