Are you wondering if you should add or increase current flow in your tank for your Arowana? Will they enjoy it or become weakened and stressed? In this article, we’ll explore the topic of Arowana swimming through strong currents.

Do Arowana Like Strong Current? Many types of Arowana enjoy swimming through currents. Strong flow rates tire out your arowana causing them to eat more or grow larger. Sometimes the opposite occurs where they become stressed and hide furthest away from the current.

It’s best to adjust according to your arowana’s reaction. A smooth or mild flow is recommended over a strong current.

Arowana swim in rivers and streams where the current can quickly become strong. They tend to enjoy swimming against it in our tanks. The increased water agitation from the current helps to dissolve more oxygen into the tank.

Arowana in a tank with more current flow and oxygenation may have to use more energy. This ends up creating a hungry fish in need of more food. The result is an active arowana who may grow rapidly.

Very strong currents are generally avoided in the wild and could lead to gill damage. Sometimes we may notice their gills curling up from high flow power heads or high-capacity filters.

Some arowana dislike strong currents. You will notice them hiding in the bottom corner of the tank or becoming stressed with the constant fight to swim against it. They may not be able to swim properly.

Many types of arowana including the silver and red species, seem to enjoy higher flowrates. The oxygen levels increase and they become more active. Some may wish to eat more due to the increase in energy used to swim against it.

Why Should I Add Currents To My Arowana Tank?

With currents in our tank, we are able to mimic the natural environment of arowana where the rivers and streams constantly flow. It’s best to observe our arowana to see how fast they like the flowrate to be.

Sometimes aggressive tankmates or other arowana simply get in the way. Your arowana may respond with aggression as well. In order to prevent any fights, increase the flowrate of the current and distract your arowana.

If the flowrate is too strong, you may stress the arowana further making it counterintuitive to preventing aggression and fighting. Find the healthy balance of mild to medium flowrates while keeping your potential fighters occupied with the current instead.

Arowana are able to gulp air at the surface as facultative air breathers. They deliver the air into their swim bladders lined with capillaries much like our lungs.

The increase in oxygen makes them rely less on this adaptation and simply enjoy active life in the tank while breathing plenty of dissolved oxygen through their gills instead.

Most of us do not wish to stunt the growth of our arowana. We want them to be active and eat well. A day spent swimming against the current will increase their appetite to replenish the energy they have used.

The increase in activity keeps your arowana healthy. The added oxygen turns to energy and promotes rapid growth.

The Amazon River or other native territories for arowana contain actively moving streams of water that could get intense at some points. Arowana naturally swim against currents, but they also like shallow waters or swims towards basins where the flowrate isn’t as strong.

These areas contain more food sources at the surface and prevents exhaustion from a long day of fighting currents. 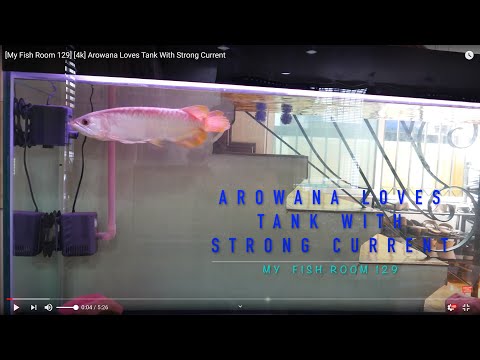 Will High Flowrate Irritate My Arowana?

There are accounts of arowana in tanks with strong currents getting damaged gills. Sometimes these gills curl up from long periods of time swimming against stronger flowing water.

If your arowana is irritated by tankmates wishing to fight, the increase in flowrate will discourage it. If arowana do not like the high flowrate they will get irritated or stressed.

You may witness the following changes to your arowana:

It may prove difficult to eat at the surface if the current is too strong. The increase in oxygen and response to the flowrate may cause your arowana to become too active. Although it’s uncommon, intense flowrates could damage the gills, scales and barbels.

Sometimes younger arowana may try to jump out from the fear of the currents or the inability to swim against them. It’s best to cover your tank or adjust the flow to a milder or medium setting.

How Do Arowana React To Strong Currents?

Arowana keepers enjoy the differences in the behavior of each particular and peculiar one. Some may enjoy and frolic with the current flow while others may shy away. Here’s a list of common reactions to strong currents:

If you don’t notice the final two reactions on the list above, then you should lower the flowrate. Just because one arowana enjoys swimming against a strong current, doesn’t mean others will. Compromise and find the happy medium to keep your arowana active and engaged.

Swimming through currents is a natural activity for all arowana. We may decide to turn up the flowrate to prevent aggression between arowana and other tankmates.

Other times we may lower it to prevent them from hiding away from it or a lack of appetite. Your arowana will let you know. It’s best to have the option of adjusting the flowrate to suit their needs.

Thanks for visiting HelpUsFish.com and we hope to see you again for another article on Arowana or any other marine life that interests you.