We bring you the answers to all these questions and more in this dwarf gourami disease guide. What Is Dwarf Gourami Disease?

What Are Dwarf Gouramis?

In case you are not already familiar with dwarf gourami fishes, here’s what they are.

Dwarf Gouramis are one of the common the many fishes that make it to the aquarium. They are really colorful and small why a lot of people keep them in their fish tanks and aquariums. A bunch of those in your aquarium will really bring life to it. 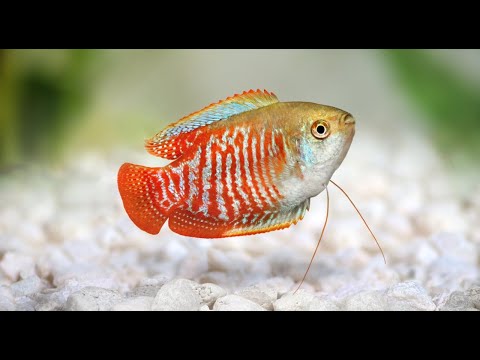 And they are, in fact, adorable fishes- very cute until they contact the dwarf deadly gourami disease.

If your fish is suffering with dwarf gourami disease you can expect them to last for 10 – 30 days before they will die.

At the initial stages, you will notice loss of colour of your fish as well as sores on the skin, loss of appetitie and swelling around the belly.

The signs are not always visible externally. Your fish might even look perfectly fine. This is dangerous because you might not know what fish has the disease when you’re keeping them together in an aquarium tank.

Also, the disease is contagious- it can be transmitted from one fish to the other. The only test to really know if your dwarf gourami has the disease is biomedical examination.

However, when a fish has the disease, there might be some changes in its behavior. A typical example is that your fish might start to swim hyperactively around the aquarium tank. When this happens and persists, you should isolate the fish in a different tank.

Subsequently, you can subject your fish to close medical examination and determine the problem once and for all.

How To Treat Dwarf Gourami Disease

Currently there is no cure for dwarf gourami disease.  Gouramis that develop this disease are expected to last 10 – 30 days before they die.

This disease has only been detected 10 years ago (2010) and a cure has not been found to date.

Visible Signs That My Fish Has Dwarf Gourami Disease

Over time, the effects of the dwarf gourami disease will become apparent. Your fish will lose a lot of body mass. It will acquire some reddish spots on its skin and refuse any food that you offer it. They also develop sores and bumps.

After this, there might be some visible bleeding on their skin before their eventual deaths.

In these moments, it might already be too late to save your other dwarf gouramis from catching the disease.

Can Dwarf Gourami Disease Spread To Other Fish?

The dwarf gourami disease is a viral disease and can be spread from one fish to the other. If you identify a fish with this disease you need to separate them from other fish asap.

How Does The Dwarf Gourami Disease Spread?

The dwarf gourami disease can spread to gourami fishes in the same water even when they don’t have direct contact with themselves. It is a viral disease and can be released into the water by one of your gouramis and spread to the rest of them.

Also, the dwarf gourami disease can spread to your new dwarf gouramis even when you no longer have infected gourami in the tank.

How? If you introduce new gouramis into a tank not long after the old fishes die, there is every possibility that the disease still remains in the water.

The disease has its way of sticking around until you make your fresh additions to the tank. That is typically how about 50% of some healthy dwarf gouramis come in contact with the disease.

The remaining 50% comes from gouramis mass breed in commercial tanks. Over 90 percent of commercially breed gourami fishes contact the dwarf gourami disease from the tank.

Can I Cure The Dwarf Gourami Disease?

When you confirm that this fish has the dwarf gourami disease, there’s not much to do than to destroy it. This will save the other fishes from contracting the lethal disease.

Steps Against The Dwarf Gourami Disease

Prevention is by far the best way to deal with the dwarf gourami disease. Neale Monks, an expert paleontologist at the London Natural History of Museum, expressed his views on it several years ago before he retired.

He expressed that the safest gouramis to get are the ones bred locally. He also reinforces his stand by insisting that these gouramis must be 100% bred locally. If you don’t get gourami disease-infected fishes from the start, the chances your fishes might get it is really slim.

You can have a fish tank that is free of fishes with the dwarf gourami disease. There are only two things you have to do: Prevent the disease from affecting your gourami fishes and isolate a fish when the disease shows up.

And there guys, is everything you need to know about the dwarf gourami disease.