Has your pond just become home to tadpoles and you are wondering will goldfish eat tadpoles?

They are omnivorous. Therefore they can eat anything that seems edible to them but does this include tadpoles?

Do you need to do anything to protect the tadpoles?

Yes, But a goldfish will not actively hunt out the tadpoles to eat them. A Goldfish will only eat a tadpole if they swim in their path and if they are small enough to fit in their mouth.

If the tadpole is to large to fit in the goldfish mouth they will simply ignore them and not eat them. Do Goldfish Eat All Types Of Tadpoles?

Goldfish are most likely to feed on everything they can come across, but there is always an exception to this if the food seems inedible or doesn’t seem pleasant.

There are toad tadpoles, and there are also frog tadpoles. Frog tadpoles are always the primary target for goldfish. Goldfish feed on frog tadpoles whenever they get the chance to.

The frog tadpoles are highly proteinous, and they also satisfy their hunger.

Unlike frog tadpoles, toad tadpoles are very unpleasant to goldfish. Toad tadpoles produce a toxic substance that discourages fish from eating them.

These toxic chemicals can be poisonous to goldfish, so they do not eat toad tadpoles.

Goldfish will eat any type of tadpole except the ones of a toad. 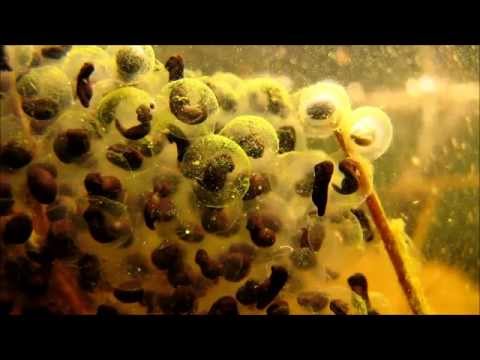 Can You Keep A Frog In Your Goldfish Tank?

Generally, you might be thinking that since goldfish eat frog tadpoles, then putting a frog in the tank should not be a problem. Yes, you can be right about that, but goldfish do not do well with most aquatic creatures in their tank.

Keeping a frog in the same tank as your goldfish is not advisable. It might affect your goldfish in the long run, that’s if it doesn’t tell almost immediately.

Nevertheless, the African dwarf frog can be an excellent companion to your goldfish, provided you have a huge tank and maintain the water properly.

How To Protect Your Tadpole From Your Goldfish

The most secure way to protect your tadpole from your goldfish is not to put them in the same tank. Preventing the aquatic creatures from the meeting is the best way to avoid the goldfish from eating the tadpoles.

If you do not have another tank to spare, you can create a barrier that prevents the goldfish from getting to the tadpoles if they are in the same container.

By the way, there are regular feeder goldfish that do not usually feed on tadpoles.

What To Feed Your Goldfish To Keep Them Healthy

Goldfish are omnivorous fish. They feed on both flesh and plant. Goldfish, in their free world, feed on tadpoles, insects, plants, crustaceans, and other smaller fish.

While grazing them in your tank, you should be aware of what they feed on in the wild.

When feeding your goldfish, you should be aware of the nutrients in the food you are giving them. The food should be highly nutritious and should be a balanced diet.

Sinking pellets are the best way to feed your goldfish to make it look natural, but it is tough to retrieve when the fish do not finish it, and this can cause the water to become cloudy.

Floating pellets are very easy to retrieve after the fish have had their fill. Although it is easy to recover, it causes discomfort and indigestion and affects their swim bladder because when they feed on the floating pellet, they ingest too much air.

Flakes are very popular when speaking of goldfish feeding. Feeding the goldfish with flakes is good, and a common thing to do, but the nutrient washes away quickly as soon as it touches the water.

Gels are a natural food to feed your goldfish. Gels digest quickly, and they contain a pretty good nutrient ratio than pellets or flakes.

How Can You Differentiate My Baby Goldfish From My Tadpoles?

It won’t be easy to differentiate the baby goldfish from the tadpoles by taking a glance at the tank. They look alike only that baby fish are vertebrates that possess gills and fins while tadpoles are off-springs of an amphibian.

Baby fish are fish that do not possess limbs, while tadpoles are larvae that may or may not possess appendages according to their life stage.

Baby fish are aquatic animals, while some species of tadpoles are terrestrial, while others are aquatic.

Difference Between a Frog Tadpole And a Toad Tadpole

Frog tadpoles possess thin tails and appear dark with gold speckles making them beautiful. Toad tadpoles have fat tails, and they are black. This effect makes them look dull and attractive.

Goldfish and tadpoles are predators and prey to each other. The goldfish feeds on the tadpole but cannot feed on all tadpoles. Fish do not feed on toad tadpoles because they secret toxic chemicals that discourage fish from eating them, including goldfish.