If you think that your goldfish might be gasping for air, there are usually signs which can confirm this.

Why is my goldfish gasping for air and what should I do?

We’re going to explain how you can notice this and why it might be happening to your goldfish.

Why is My Goldfish Gasping for Air?

Your goldfish is gasping for air is because of a lack of dissolved oxygen in the water. The best way to add oxygen to water is to add an air pump (Available on Amazon) to your tank.

Dissolved oxygen levels are at the highest at the waters surface and this is why they are trying to get oxygen from here because they are not able to in other parts of the tank.

Allow me to explain much more on this below: How Do I Know If My Goldfish Is Gasping For Air?

There are 4 signs to see whether your goldfish might be gasping for air which are:

1. Staying close to the water’s surface

If your goldfish is staying closer to the surface of the water, this could potentially mean that they are struggling to breathe and could be distressed. This isn’t necessarily the first sign you will spot, so if you notice this, it is best to act fast. Why Is My Goldfish Gulping at Surface?

Often or not, if you notice that your goldfish is struggling to breathe at the surface, it is most frequently caused by poor water conditions or lack of oxygen.

If you do believe that your goldfish is possessing these symptoms, they are going to be unhappy and potentially dying, it is something that you need to act fast on. Oxygenate the tank with an air pump or air stones.

Overcrowding can sometimes cause issues when it comes to the level of oxygen in your goldfishes tank. More fish means that there is more waste being produced.

This can sometimes block the filter and cause the water movement to be prohibited. Overcrowding can mean that there is less oxygen to share between the goldfish.

It would be better to have less goldfish together in a tank if you are looking to increase the oxygen levels. If you have more goldfish, but they are in a small tank, it would be wise to transfer them to a larger tank with multiple filters.

Goldfish are cold-water fish, and unlike other types of fish they cannot survive in warm water conditions they need a higher oxygen level which they are only able to get from cold water conditions.

Goldfish need high levels of oxygen for them to survive; therefore, if the temperature is too high, this means it is less oxygenated.

When there is no water movement, this means that the oxygen levels will be affected. It is usually caused if there is no filter in the tank to move the water around. How To Get More Oxygen In Your Goldfish Tank?

Thankfully, it won’t take a rocket scientist to get more oxygen into your goldfishes tank; it is something that you will be able to, fortunately, do yourself.

There are a variety of different solutions to solving the problem.

If you do not already have a water filter, you need to buy one, and it might explain why the water isn’t oxygenated in all points of the tank. A water filter helps there to be water movement in the tank. You need one which moves the water from the bottom of the tank to the top. A filter which does this will help to spread the oxygen throughout the tank.

If you already have a filter, you want to make sure it is regularly replaced, as well as ensuring that it entirely moves the water around the whole tank.

Purchasing a larger tank is a wise idea if you have a lot of goldfish, it will help to prevent overcrowding. It might mean that you need multiple filters to ensure water is being moved around the entirety of the aquarium. 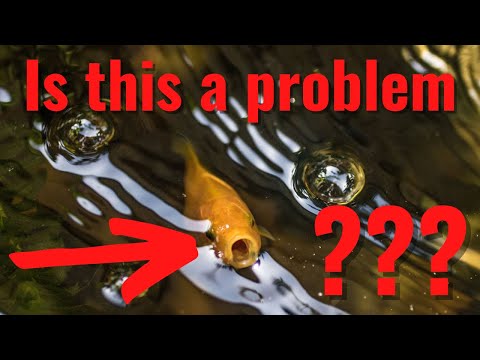 Is It Normal For Goldfish To Gulp Air?

It is not a regular habit for goldfish to gulp air. If you spot your goldfish gulping air, it is a sure sign that there is something wrong.

Ingesting air likely means that your goldfish is unable to breathe correctly; they are trying to find oxygen within the water.

Fish Gasping For Air After A Water Change

Suppose your fish are gasping for air after you have changed the water. It could be due to the chemicals that you have put into the water.

If you use too much or too little chemicals, this could potentially be the reason as to why your goldfish is gasping for air after a water change.

How To Spot The Signs

Unfortunately, it is common not to notice when your animals are in pain or distressed because they are unable to tell us what is wrong physically.

It is essential to know what can potentially occur to your fish and how you can act upon spotting the signs. We have told you the main reasons goldfish face difficulty with breathing and how you can notice it.

Make sure that you avoid having:

This will ensure that your goldfish lives a happy and healthy life.

It’s always a worry when you notice that there might be something wrong with your pet goldfish; they aren’t like us, humans.

They can’t explain the situation that they’re experiencing, but sometimes there can be clear signs which are easy enough to spot.