Do you have Goldfish that you simply do not wish to care for? Are you wondering what to do with unwanted goldfish?

Are you thinking of releasing your Goldfish in a wild pond or lake? In this article, we’ll run through your best options for giving up your unwanted Goldfish.

What to Do With Unwanted Goldfish

Donate your unwanted Goldfish to nursing homes, schools or post online for free adoption. Never release them into the wild or flush them down the toilet. Goldfish have become an invasive species of fish in the wild and we shouldn’t contribute to creating an ecological disaster.

Yes. There are continuous reports in North American freshwater regions where goldfish have become an invasive species. They have multiplied and some are so huge, you would hardly recognize them as your friendly little pet you used to have.

Search for gigantic goldfish and you’ll see some at over 1.5 feet long and over 4 pounds. How did this happen? The answer brings us back to the topic of this article.

If you have unwanted goldfish, never release them in natural waters. They can cause an imbalance to nature’s delicate ecosystem. This is an example of “aquarium dumping” and we wish to shed more light on this important issue.

What Is Aquarium Dumping?

There are studies in US showing that a significant fraction of the fish keeping population considers it safe to dump unwanted aquarium fish into wild lake, ponds, rivers and streams. These fish cause harm in so many ways including:

Please consider allowing a friend, teacher, nurse or anyone online that is interested in adopting your goldfish to give it a new home instead.

Why Do People Dump Goldfish?

These people are not bad. They simply don’t realize the chain reaction or domino effect of introducing a species in a region that isn’t used to it and doesn’t have the ability to withstand it.

Goldfish are released for many reasons including: 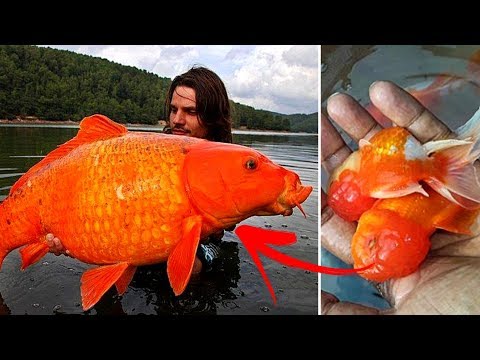 Can I Flush My Dead Goldfish Down The Toilet?

Please don’t flush your goldfish down the toilet anymore. It’s ok if you remember doing this and seen countless TV shows growing up where this was commonly shown to us.

A sick or dead goldfish can introduce new parasites, bacteria and fungal infections into our water systems. Some fish may actually survive and make their way to open waterways where they reproduce and become an invasive species.

This is considered inhumane and simply an incorrect way of disposing a dead or dying fish that can easily decompose or be buried.

Can I Release My Goldfish Into the Wild?

No. The image of freeing a captive aquarium fish into the wild sounds liberating and rewarding, but it’s actually harmful and discouraged.

We try to maintain a delicate ecosystem in our aquariums, but nature’s balance of maintaining life forms in their natural habitats are thrown off by human decisions all the time.

Let’s not contribute to adding fish into areas where they don’t belong. Here’s what may happen:

Messing around with Mother Nature is no joke. Our actions may create a ripple effect that goes far beyond our own lifespans. It will also contribute to the unnatural life that you wish for your goldfish to continue in the wild.

What Should I Do With My Unwanted Goldfish?

You may feel that it’s time to move on from your duty and responsibility to care for this goldfish. You have your reasons and no one should judge you for them.

Nevertheless, if you can act in the least harmful way for your goldfish and nature’s delicate balance, you can forgo releasing it into natural waters and try these tips instead: Where to Donate Goldfish

It is really important not to toss a goldfish in a pond, lake, river or stream. You should also never toss a living goldfish or of half dead goldfish into the toilet and flush it down.

You might be messing up the entire ecosystem all future wildlife when goldfish are introduced in places where they shouldn’t be.

These are resilient fish that can survive incredible conditions. There are instances of large mutated goldfish in rivers or lakes where they shouldn’t be.

Thankfully there are many ways that you can donate goldfish. We’ve compiled a list for you of all the available options that we could come up with at the moment. Here they are:

Donate your goldfish fish to:

You can also advertise a free goldfish on:

How Do You Humanely Get Rid of Fish?

If your goldfish is diseased to the point where there is no chance of recovery, you may have to consider euthanizing.

A loss of color, zero appetite, bulging eyes or gasping for air while your goldfish floats at the surface of the tank might mean that it’s time to say goodbye.

One humane method is using clove oil to dose a bowl with your goldfish in it. 0.4 milliliters of clove oil is enough for 1 liter of water. Your goldfish will pass away in a fair and humane way without suffocating or suffering much longer.

If your goldfish is dead or dying, flushing it down the toilet can release bacteria or parasites that were never meant to be released.

Leaving your goldfish to decompose, dry out or performing a burial is a better practice to say goodbye to your pet.

Donating an unwanted healthy goldfish gives a new person or group of people an opportunity to enjoy our favorite hobby and enrich the life of this aquatic animal even further.

Thank you for visiting HelpUsFish.com today for a truly important article on goldfish. We enjoy serving the aquarist and fish keeping community through our articles based on research and experience. See you soon!