Goldfish are common aquarium fish and they are easy to keep because of their gentle and peaceful nature. This fish species spend most of their time swimming gracefully in the middle and bottom of the tank. Goldfish are timid and slow swimmers.

Yes, goldfish take a few moments off their swimming activities to rest or sleep. However, they don’t sleep in the same manner as land mammals. Even though they reduce their activities, goldfish will still be alert to danger during this period. How Do You Know If a Goldfish is Sleeping?

It is relatively easier to tell when goldfish are sleeping if you are experienced with them, but it might prove a hassle for inexperienced aquarists. They don’t have eyelids to close; hence, they can appear awake even while sleeping.

TIP : Can goldfish see in the dark? Check out my other article here to find out

Goldfish will lie motionless at any part of the tank when they are asleep. Goldfish often lie at the surface or the bottom of the tank if they find it comfortable. You might not find the fish around the middle of the tank because goldfish actively swim there. 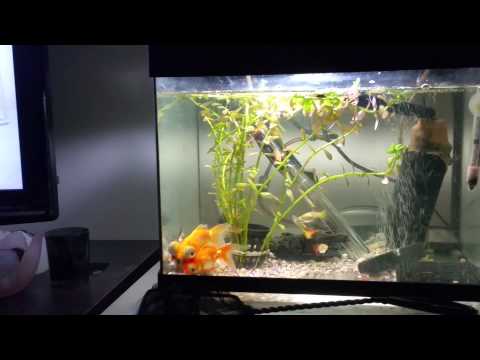 Similarly, sleeping goldfish have a slightly different breathing pattern. If you pay keen attention, you would observe only slow movement in the gills of goldfish. This observation shows that goldfish will breathe rather slowly when they are asleep.

The color of goldfish will also slightly fade when they are asleep. This color change is temporal as the original color will be restored once fully awake and active. The dull color is to prevent them from being easily noticed by predators.

How Long Do Goldfish Sleep For?

Goldfish can sleep for up to 8-12 hours a day. They mostly sleep when the environment is quiet and dark. This preference explains why you will mostly find them sleeping at night.

The sleeping duration of goldfish is another common question on the mind of many aquarists. It might become worrisome when your goldfish begin to lie motionless or become unresponsive for longer hours than necessary.

Nevertheless, some goldfish still take naps in the afternoon to shorten their sleep time at night, while some will not sleep until night.

You can influence the sleeping cycle of your goldfish to match yours. Turning off the tank light at night will get them to sleep at night and stay active during the day. It would be best if you also tried to aid their sleeping cycle by ensuring that you don’t keep their tank light on for more than 12 hours a day. Why is My Goldfish Sleeping More Than Usual?

Goldfish sleeping longer than usual might be a clear indication of poor water and tank conditions. Goldfish living under healthy and optimal conditions shouldn’t sleep or stay inactive for too long.

High ammonia levels and low oxygen levels are part of the major causes of excessive sleeping in goldfish. These two conditions usually occur as a result of a dirty tank.

Goldfish can also sleep more than usual if their water is too hot or too cold. An inappropriate temperature in the goldfish tank can lead to illness, lethargy, and loss of appetite, which might cause them to stay inactive for a longer period than necessary.

In general, goldfish sleeping more than usual means they are not staying in a healthy environment. Consequently, it can affect their growth, general health condition and shorten their lifespan.

What Happens If My Goldfish Doesn’t Get Enough Sleep?

Like most other animals, goldfish also need enough time to rest so that they can stay active when they need to. They spend most of their time swimming in the middle of the tank when they are not sleeping. They need time to recuperate once they are done with their active swimming.

Goldfish will become less active when they don’t get enough sleep. Also, goldfish would neither swim as usual nor engage in other physical activities.

Goldfish not getting enough sleep will make them lose their body’s ability to fight disease and infection. Good sleep helps goldfish to maintain their immune system and restore their energy properly. Poor sleep will increase their stress level, making them vulnerable to parasites, diseases, and infection.

Similarly, goldfish can lose appetite when they don’t get enough sleep. This loss of appetite is primarily due to the reduction in the rate of metabolism.

When Do Goldfish Sleep Day or Night?

Goldfish do not have any specific time to sleep. This fish species can sleep both day and night as long as they have a quiet and dark environment. They don’t necessarily need night time to sleep. If you keep goldfish indoors, you might not have to wait until night time to achieve their sleeping condition. There are ways you can influence the sleeping cycle either day or night. All that matters is for them to get enough sleep.

Nevertheless, the best time to achieve the perfect sleeping condition for goldfish is at night. During this period, the environment is naturally dark and quiet. You can enhance their sleep mode by turning off the light in their tank.

Do Goldfish Need Darkness to Sleep?

Goldfish don’t naturally have to wait till night to sleep like humans and most other animals. The only reason why they mostly sleep at night is that they need a dark and quiet environment.

So, yes, goldfish need darkness to sleep. However, this doesn’t completely rule out the possibility that they can still take naps in the presence of moderate light. Some of them will even sleep during the day to shorten their sleep time in complete darkness. Therefore, you can help your goldfish get good sleep for the usual number of hours by turning off the fish tank’s light.

Darkness will eliminate the need for protection from light to help them sleep. Goldfish can also fall asleep under moderate lights that cannot significantly affect their eyes.

Is My Goldfish Sleeping or Sick?

There is only a thin line between a sleeping goldfish and a sick goldfish. Hence, a good aquarist needs to differentiate between the two conditions to avoid severe damage to the tank.

You might have to rely on other signs of sleeping goldfish since they don’t close their eyes while sleeping. The fish will hang somewhere in the tank, and they might appear awake and sharp.

The body of a sleeping goldfish usually maintains a stationary upright position while sleeping. A sick goldfish, on the other hand, floats in an unusual manner. You might find the goldfish floating sideways or upside down.

If your goldfish is floating or lying sideways, it might be an indication of bacterial infections. It can also be due to the accumulation of toxic organic compounds like nitrate and ammonia in the tank.

A floating fish upside down or sideways might also be a result of swim bladder disease. The swim bladder is a fish organ that aids buoyancy and keeps them afloat. Another notable symptom of this disease is difficulty in sleeping.

Once you are able to spot that your goldfish is sick and not sleeping, you can take the first step of cleaning up the tank. You should also ensure optimal water parameters. However, you should contact your fish veterinarian if the condition persists.

Do Goldfish Sleep On The Bottom Of The Tank?

Goldfish can sleep comfortably at the bottom of a tank. In fact, it is one of goldfish’s preferred sleeping areas together with the near-surface of the tank. They only spend the most active swimming period in the middle of the tank.

Sleeping is the only health condition that can make you find goldfish lying at the bottom of a tank. Even though Goldfish can fall asleep anywhere in the tank as long as they are comfortable, the bottom of the tank remains one of their top preferences.

One of the major reasons why goldfish sleep at the bottom of the tank is because of the lower light intensity in this region.  Remember, they sleep without eyelids to protect them from light disturbance.

How Many Hours Does a Goldfish Sleep?

Getting enough sleep is crucial to the health of goldfish. You can enhance good sleep time for your goldfish by taking some decisive actions.

You can turn off the light in their tank for 12 hours a day to help them get good sleep. If you want them to sleep during the day, you can place their tank in a dark, quiet corner in your home.

Ensuring optimal tank condition that is free from dirt and waste will also help goldfish to get good sleep. Avoid the buildup of organic compounds like nitrates and ammonium.

Likewise, you should keep goldfish from aggressive and disturbing tank mates. It is also better to avoid overfeeding goldfish, particularly at night.

First off, it is essential to clarify that fish’s sleep is quite different in humans and most other land mammals. There are no clear indications to certify if goldfish dream or not.

However, scientists attribute dreams to a shift in brain waves during a deep sleep cycle. Since goldfish’s brain waves don’t change during sleep, it is highly unlikely that they dream.

Since it is impossible to ascertain goldfish sleep or not, then it is comic to assume that they might be having some sweet dreams about fish flakes and other tank mates.

Below are some frequently asked questions about goldfish.

Do goldfish sleep with their eyes open?

Yes. Goldfish sleep with two eyes open because they don’t have eyelids to keep their eyes closed. Only a few species of fish have eyelids, and unfortunately, goldfish are not one of them.

Can goldfish live with no sunlight?

Goldfish cannot live their best life without sunlight, and this can impede their growth and shorten their lifespan. There are shreds of evidence that goldfish will start losing their bright colors to start appearing pale and drab in the absence of sunlight. Allowing optimal sunlight into your tank will enhance the growth of live plants that help with the tank’s filtration.

Do goldfish swim when they are sleeping?

Goldfish do not swim when they are sleeping. This fish species usually hang in a suitable part of the tank and remain motionless. However, you might see some signs of movement while goldfish are sleeping. This movement doesn’t mean they are swimming; it is just a means or retaining stability while asleep, and it is usually almost unnoticeable.

Goldfish do not sleep sideways. Goldfish maintain a stationary upright position all through the period when they are asleep. Also, goldfish sleeping sideways or upside down is not normal. It can either indicate disease and infection or indicate poor water quality and an unhealthy tank.