Are you worried that your mollies are about to give you some new hatch lings? Is it possible to stop your mollies from breeding?

In this article, we will teach you how to stop mollies from breeding.

How To Stop Mollies From Breeding? The only way to stop your mollies from breeding is to only keep one sex in your tank at any one time.

You cannot stop your mollies from breeding. However, you can control their breeding. Where you have both genders in your tank, there is no stopping them from breeding.

Thus, to stop them from breeding, you should separate both genders. Yes, mollies breed easily. However, mollies are livebearers which means they don’t lay eggs like most fishes.

Mollies mating is hierarchical, the dominant male gets its way with many females, and a successful mating brings multiple fry within 3-5 weeks. Breeding is a piece of cake for mollies.

A higher temperature in their habitat can initiate mating among mollies.

A very low temperature affects their interest in breeding, while in clean water and a slightly higher temperature not higher than 78°F makes breeding easy for them.

The fertile and easy nature of mollies breeding cannot be under-scored.

They are a good source of live feed for carnivore fishes such as piranha, tuna fish, sea basses, etc., as mollies’ consumption induces their growth and production rate.

Do Mollies Breed a lot?

Mollies are also famous for their prolific breeding. As livebearers, they are one of the most fertile fish among fishes. Mollies mate regularly. In one birth, a single female can give birth to over a hundred fry. 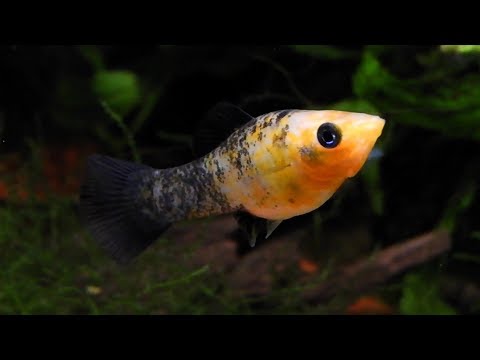 There is a habitual preference for mating. The female prefers to mate with the dominant male.

It takes about 35-45 days before the fry is released. They give birth to an incredible number of hatchlings and give birth as frequently as every month.

Female mollies can store sperm for a very long period. If you obtained your Molly from a pet store, it is very much possible they can use the stored sperm to fertilize their eggs.

Just by having a female Molly in the same tank as a male, breeding is almost inevitable as male mollies are constantly pursuing a mate.

Any Way to Discourage Mollies From Breeding?

Yes, you can control mollies breeding in many ways. Although mollies cannot be neutered, however, you can use the traditional way of controlling breeding, including putting the two genders in separate tanks.

You can discourage mollies from breeding by doing any of the following:

1. Getting one particular gender

You can effectively avoid mollies breeding by buying one gender. Mollies are always breeding when put in the same tank with the opposite gender. To prevent unwanted breedings, it is best advised to go for all male or all females.

If you already have a male and a female Molly, and you want to discourage them from breeding, you could separate their tank. However, this method is not effective, as mating might have already occurred before separation. This method will help you avoid future breeding.

3. Getting the pet from a trusted breeder

Getting from a trusted breeder will also help. This way, you can get female mollies that have not been exposed to a male Molly. This way, there will be no fear of buying a pregnant molly or one that has stored sperm to fertilize its eggs later.

Mollies are less likely to breed when the water temperature is outside their optimal range. If you keep your tank in a less favorable condition, it will reduce the breeding activity. This procedure, if adopted for an extended period, may expose them to unwanted health conditions.

What to do with unwanted Mollie Fry

You can sell or give away unwanted mollie fry. You can also feed them to the adult mollies or release them to local ponds where they might be eaten.

If your tank is getting overwhelmed by the increasing fish, you can choose to adopt the following measures

1. Sell or give away the hatchlings

2. Allow the adults to feed on the hatchlings

Mollies, if kept in the same tank as their fry, eat them up. This may seem ridiculous, but it is one of the feeding nature of the species. Allowing the adult to feed on fry is an alternative in reducing unwanted breeds.

3. Release them to local ponds or water bodies

You can save yourself the stress of looking for a buyer for unwanted fry by releasing them to water bodies. This is both easy and effective.