Is change of gender a possible phenomenon for this aquatic creature?

In this article, you’ll learn everything you need to know.

Mollies cannot change gender. Like most animals, a Molly’s gender is determined by their gene and the gene cannot change.

Thus, it is impossible for mollies to change their gender. Is it Possible for Mollies to Change Gender?

No, it is impossible for Mollies to change gender. However, mollies may possess the physical feature of a gender at the early stage of their life, and later look like another gender. This physical change doesn’t mean a gender change.

Mollies are from the Peocilia family and are livebearer fish. As part of the features of livebearer species, their gender can only be determined by their genetics. This implies that they cannot change their gender.

The ability of fishes to change their gender cannot be totally ruled out as science has proven that some fishes such as:

These fish above can change their gender as they mature. However, that is not the case with mollies.

How to Identify Your Molly’s Gender

You can identify Molly’s gender by looking out for certain physical features, including their shape and fin sizes. The male, for example, has a torpedo-shaped body while the female has bulky figures.

Identifying Molly’s gender can be very easy. Here are some key features you should look out for when trying to identify the gender of your Molly gender, some of which includes:

Their body shape varies depending on their gender. A male Molly has a torpedo-shaped body, while the female Molly has bulky figures and is wider than the males at the rear abdomen.

2. The size of Their Gonopodium and Fins 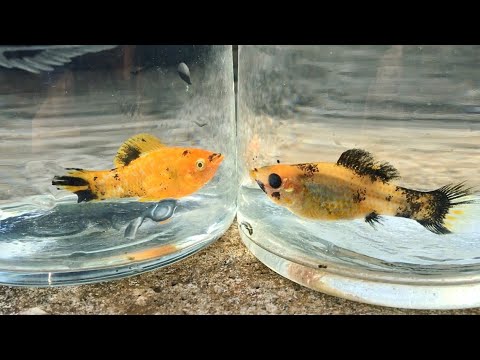 Why do People Think Molly Can Change Gender?

People think mollies change gender because, as hatchlings, they possess the physical features of a particular gender. This is sometimes because they have not grown big enough to display their gender distinctive features such as fins and body shape.

Judging by scientific research, Molly does not change genders. Although, a lot of people think Molly changes their gender over time. When mollies are small, most of them have female appearances.

These thoughts come to mind because, as hatchlings, mollies could have similar features of a particular gender.

This is sometimes because they have not grown big enough for their features such as fins and body shape to develop to their gender type.

However, people believe that when female mollies get pregnant, they turn into male mollies, and they give birth to their hatchlings with the aid of their gonopodium. This belief is false as science does not believe that mollies or livebearers change their gender.

Many Mollies usually turn black as they age, as some mollies develop black spotting during maturity. However, mollies also turn black when they are stressed, suffering from diseases or ammonia concentration.

Mollies come in different colours. Some of these colours include:

This fish could get very colourful as they mature, Although the process could reverse as they get too old.

Its diet could determine the colour of your Molly. Molly that suffers from malnutrition could lose their pigmentation and become white.

If you think you are giving your Molly a nutritious food, and you still notice worrying changes in its colour, you should take it to the vet for a professional diagnosis. Colour changes may be due to medical conditions.

Thanks for visiting HelpUsFish.com for this article on Molly fish. We have plenty more informative articles for your interest. Check out our home page and search bar for hundreds of more selections that could benefit you and your aquatic life. Bye for now!