How Aggressive can your angelfish be? How can you reduce their aggressiveness? Can bullying affect your angelfish health? If you want to keep all your fish safe and stop angelfish from bullying others, you should read this article.

You will need to create more space in the tank for the weaker ones to stay out of the bully’s territory. Including plants, substrates, and other hiding places will protect weaker fish. Providing enough food will also mitigate the possibility of Angelfish bullying others. 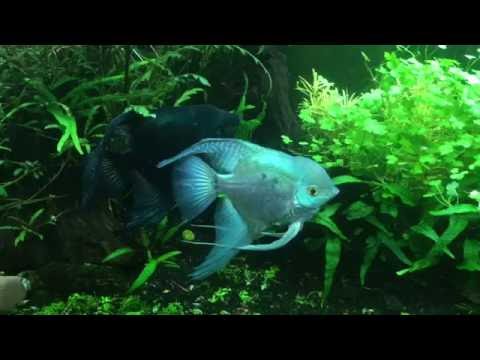 Why Are My Angelfish Bullying Other Fish

One of the causes of angelfish bullying other fish in the tank is the lack of space. Angelfish will bully others if there is not enough space in the tank. Also, they are quite territorial and will bully weaker fish into defining their territory.

If there is not enough space in the tank, there will be little territory to claim. The lesser the territory, the more reasons, the larger angelfish will need to defend it.

How to Train a Golden Retriever Puppy to Stop Biting

You will see your angelfish fighting and bullying other fish to gain access to more food. Furthermore, the larger fish will eat as much as they can, leaving the rest to the smaller ones. You will need to provide enough food for your fish, so there won’t be much bullying.

When there is enough food, every fish gets what it wants, leaving no chance for trouble. Larger angelfish will get to eat to their fill, and others will also get something to eat. There will be no issue of bullying if there is enough for all.

Angelfish will also tend to bully other fish during breeding seasons. They do this to exercise their dominance over the females. Large males will bully and chase away smaller ones to have the females to themselves.

You will notice signs of bullying when the female is protecting her eggs from other fish in the tank. She will bully and chase them away to keep her offspring safe. She will also chase away other species alongside other angelfish in the tank.

Bullying might not be safe for your angelfish if it becomes excessive. You will have to find a way to stop the bullying.

How Do You Stop Angelfish Aggression?

Before you can stop angelfish aggression, you will need to know the cause of the aggression. If your angelfish are aggressive and fighting for food, the best way to stop the aggression is to provide an adequate food supply. When there is enough food for all the fish, there will be no cause for aggression.

Territories can also make your angelfish aggressive. When you introduce a new fish to the tank, the angelfish in the tank will become aggressive towards it to defend its territory. However, you will need to dissolve the angelfish territory to reduce its aggression.

You can rearrange the structures in the tank to make the angelfish lose its marks of territory. You can also change the landscape of the tank before introducing new fish into the tank. It will make them lose their claim of territory.

Another effective way of reducing territorial aggression is by creating hiding space in the tank. The hiding spaces help keep weaker fish away from larger and aggressive ones. Since the weakfish will not cross paths with the larger ones often, there will be little show of aggression.

You can also increase the size of your tank if you have an aggressive fish in the tank. Having more space will mean there will be little chance for your aggressive fish to get around the tank more often. It will keep the smaller fish safe and reduce aggression in the tank.

Overstocking your tank can also increase aggression in the tank. Aggressive angelfish can lose their cool when they have too many fish around them. You have to ensure you do not overstock your tank to reduce aggression.

What to Do When Your Angelfish Are Fighting?

When your angelfish are fighting, you need to stop them. If they continue to fight, they might hurt themselves or even get themselves killed. You have to stop them from fighting by separating the two fish.

When there is not enough space in the tank, the fish will have territories to claim and stop the fight. You can also create hiding spots in the tank to prevent fighting. Plants in the tank can also reduce aggression and stop fighting between fish.

Why Is My Angelfish Attacking My Other Angelfish?

Angelfish are not very aggressive. They rarely display signs of aggression except in some cases. One of the times angelfish will attack other fish is during breeding seasons.

During breeding seasons, angelfish attack each other in a bid to establish dominance. They fight and attack smaller angelfish to gain the right to the females. Males will also attack other angelfish to protect their young ones.

They do this to keep their young ones safe and ensure they pass their genes to the next generation. Angelfish will also attack other fish when defending their territory. When another fish enters their territory, they attack the fish, telling it to back off.

Why is My Angelfish Suddenly Aggressive?

A sudden display of aggression can also be a result of another fish intruding on their territory. Angelfish tend to be aggressive when defending their territory. They will attack and chase out any fish that trespasses.

Angelfish bullying each other is not uncommon to see in the tank. You have to stop them from fighting or attacking each other by performing the right actions. Preventing your angelfish from becoming aggressive will keep them from hurting each other and remain safe.