Are your Angelfish preparing for the spawning season? Do you wish to protect your wigglers by moving them into a new tank? Are you curious about the proper process of doing this? This guide provides everything you need to know about wigglers and moving them into a separate tank. Let’s find out!

Fill the new tank with water from the spawning tank. Ensure that the water includes substrates, dirt, and other materials that can help you transfer nitrogen cycle bacteria. Carefully move the wigglers together with the surface they attach to a new tank.

Note that moving wigglers involves careful evacuation to a new but safe tank. You can add some methylene blue to the new tank to prevent the growth of bacteria. You would need a small filter, heater, and partial water change of about 10% every day to keep your tank intact. 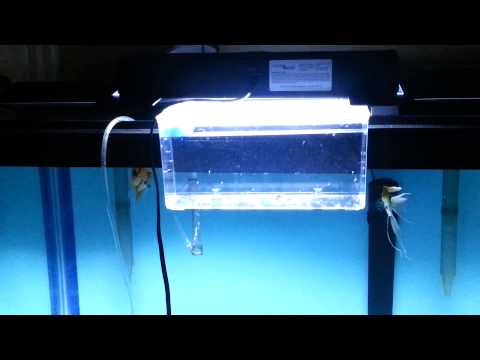 What Are Angelfish Wigglers?

Angelfish wiggler is a stage right after hatching. All the essential organs of the fish are still developing at this stage. The larvae are fully developed at this stage, but they are not mature enough to start eating.

The larvae are still attached to the spawning site, and the wigglers are still packed together. They are yet to become free swimming, but you will observe apparent movements in major body parts.

They have a filament that protrudes from the head, which serves as a point of attachment to the spawning site.

The wigglers still have their eyes, tails, and other internal organs under development. It would be best if you didn’t feed them at this stage. Offering them food will only pollute the tank.

Wigglers will not be able to eat whatever you offer to them until they are fully developed. They will still be feeding on their yolk sac. The nutrients from this source are enough to carry them through this stage.

When Angelfish wigglers become free swimming, it means they are ready to become independent fry.

Angelfish wigglers will become free swimming in about 3 to 5 days after hatching. The length of this time depends on water parameters, including temperature.

All the parameters and conditions in the tank must be favorable. They should support and boost their survival.

At the free-swimming stage, all the organs of the Angelfish are fully developed. They can survive the initial two days by feeding on the tank’s microscopic organisms (infusoria).

Slowly, you can start introducing the free-swimming fry to foods like micro worms and hatched brine. These foods are rich in protein, which can help you to speed up the rate of development.

Keep in mind that free-swimming wigglers would completely lack parental care. So, you have to put more effort into making the tank comfortable for them. Ensure to feed them appropriately to aid their growth and development.

The primary reason is unfavorable water conditions, particularly lack of oxygen. Offering them food at the wiggler stage will limit their chances of survival too. This act can foul the tank, causing some harmful bacteria and chemicals to pop up.

Angelfish wigglers need the best conditions to ensure their survival. They need the right temperature, pH, microorganisms, and other parameters to boost their chances.

They might start dying if any of these conditions are not favorable. It will halt their development and make them vulnerable to the harsh conditions; hence, leading to death.

Adding methylene blue to the tank will prevent the growth of fungus that might kill your wigglers. Introducing a small filter and heater are also helpful in making the wiggler tank favorable.

Note that Angelfish wigglers cannot eat until they become free-swimming. Offering food to them will only foul the water; hence, limiting their chances of survival. The unconsumed food can pop out harmful bacteria and substances that are hazardous to the fish’s development.

When To Move Angelfish Wigglers

Moving Angelfish wigglers must be appropriately timed to ensure their safety and boost their chances of survival.

You can move Angelfish wigglers immediately when they reach this stage. It is best to move them in less than 24 hours after hatching. It is crucial to move them when they are still tightly attached to their substrates.

You have to wait for the entire spawning season to be over before moving your wigglers. Also, keep in mind that you need to recreate similar spawning conditions in the new tank.

Can You Move Angelfish Eggs?

Angelfish eggs are adhesive to various surfaces, which makes it easy to move angelfish eggs. So, it is possible to move Angelfish eggs to a hatching tank. But you need to ensure that the movement is timed correctly.

Ensure that the eggs remain translucent if you intend to move them. If you find the eggs attached to substrates, you can move the entire substrates alongside the eggs. It is easier when the eggs are on surfaces like driftwoods or plants.

If they are on surfaces like tank walls, you can scoop them to a substrate and move them to a new tank. But this method requires proper care. Ensure that you don’t damage the eggs during this process.

Moving Angelfish wigglers might be crucial to protect them and ensure their survival. Ensure that the condition of the new tank is favorable for the wigglers. It would be best if you replicate the state of the spawning tank in the new wigglers tank.