Angelfish are one of the most popular aquarium fish with keepers, In this article I will go through how many angelfish you can keep in your tank. How Many Angelfish Should Be Kept Together?

Angelfish are schooling fish and should be kept in groups from 5 and should not be kept alone.  Angelfish tend to pair up and require company from other angelfish to keep them happy and thrive.

Keeping more than one angelfish requires advanced husbandry, consistent effort, big tanks, proper planning, and a bit of luck. The need for these requirements is because of the territoriality of angelfish. It is best to keep just two angelfish together in the same tank.

One of the significant challenges with angelfish is keeping them together in the same tank. 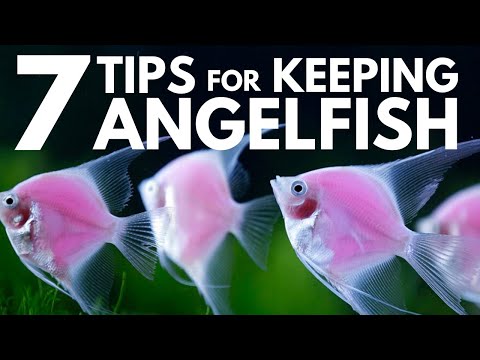 Keeping more than two angelfish together might not work out well except you are very experienced, and your tank is big enough. This condition is because of the territoriality and aggressive nature of angelfish.

However, you can still manage the situation by using a big tank with lots of aquarium plants to provide them with enough hiding places. Overall, keeping multiple angelfish together is not easy, but it can be made possible with proper planning, good water quality, a large tank, and a proper diet.

How Many Angelfish in a Tank?

When you ask a lot of experienced fish keepers, they say that keeping angelfish together in a school of 5 or 6 is a healthy and recommended amount.

You will have to have enough tanks space to achieve this amount because when you follow the 1 inch of fish per gallon rule, you will need at least 6 to 10 gallons of water per angelfish. Do not force yourself to keep more than five or six together at the same time if your tank doesn’t allow for it.

You will end up doing more harm than good when you have stressed out angelfish who may end up becoming aggressive or territorial with each other. The last thing you would want is your males to be fighting with each other constantly.

A 55-gallon tank would be sufficient for five or six juvenile angelfish and you may have to prepare them to move to a larger tank in the future if they become aggressive or territorial.

How Big Do Angelfish Get?

Angelfish are usually around 6 inches long when they reach adulthood. This is a number that is common in captivity. This is why you should not keep angelfish in a tank smaller than 20 gallons.

They are active fish and the more amount of space to give them the easier it is to witness the calmer side of their temperament. Sticking five or six of them together in a 30-gallon tank would create hostility between themselves.

Angelfish are usually taller in height than they are long. This is why it’s recommended for you to have a tall tank instead of a long one.

Common angelfish can reach anywhere between 8 to 10 inches when they become fully mature, but this usually occurs in the wild.

If you would like to try to have an angelfish that reaches that maximum length of 10 inches, you will need to have a tank larger than 55 gal where you can keep over five or six of them at once.

How Many Angelfish per Gallon?

Angelfish should follow the general rule of thumb when it comes to stocking any type of aquarium fish. The rule is usually that you should have 1 gallon of water per inch of fish.

So if an angelfish is about 6 inches in length, you would need at least 6 gallons of water. Some angelfish can grow up to 8 to 10 inches in length and it’s best to have more than enough space for the fish who are known to become territorial when this space is too tight.

Overcrowding is the last thing you want when you’re trying to keep more than one angelfish together. There is a common debate between being able to stock either two angelfish in a 29 gallon tank or for only one angelfish in the same amount of space.

We believe it depends on the amount of males you have as well because male angelfish are more common to fight each other in tight spaces.

Overall we consider a 55 gallon tank the best size for stocking 4-5 angelfish Be prepared that if they reach over 8 to 10 inches in length and display territorial tendencies, you may have to consider a larger size tank in the future.

Can Two Male Angelfish Live Together?

Two angelfish can live together but stocking only two males will be tricky. The reason being is because male angelfish can be very territorial against each other. It will be hard for two male angelfish to share the same space without getting into quarrelling matches.

They may butt heads if there’s not enough space. You will have to create a crafty territorial spaces with enough planted areas to separate them.

The best bet is to have an extremely large tank. This way they will have plenty of space and will not have to interact in any type of territorial disputes. Another method of lowering the tension between two male angelfish is by adding more females in the tank to calm things down.

Do Angelfish Need Other Angelfish?

Angelfish are social fish that enjoy being together in the tank where there are kept in groups of five or more. Many aquarists think that an angel fish only tank is the best way to cultivate and promote their healthy activity levels.

The fact is that angelfish can get territorial and would require a lot of space to maintain the peace. You do not want angelfish to interact with aggressive tankmates of other species as well.

You can keep just one angelfish if you want in a small tank. You would have to provide this single angelfish with plenty of things to do such as adding decorations and planted areas to investigate and swim through.

You have a mission to keep this single angelfish from being bored. It’s better to have one angelfish instead of two male angelfish who are constantly fighting with each other for territory in a tank that is 30 gallons or smaller.

Angelfish, like most other members of Cichlids, are aggressive and territorial. They usually form small hierarchies and fight to defend their territory against invasion by similar species.

They typically fight by locking lips, and the result of their fight is generally brutal. They usually prefer to compete than cooperate, thereby highlighting why keeping multiple angelfish together can be challenging.

They are particularly aggressive towards the members of their school, and they are less likely to bully other members. Angelfish usually weave in and out of aquarium plants and pebbles to secure a hiding place for themselves. They can also hide in an overcrowded tank because they are an immensely showy fish. As part of their territorial nature, angelfish fiercely defends their eggs and take care of fry for up to two months until they are enough to protect themselves. They are one of the few species of fish that look after their young ones and protect them.

In general, angelfish rarely interact with each other outside competition and mating. They would rather fight than cooperate or move together. Likewise, they don’t have a coordinated swimming pattern or cooperative schooling and foraging.

Angelfish is one of the most demanding aquarium fish when it comes to tank and environmental conditions. In the wild, they are native to the Amazon River and its contemporaries in South America.

They naturally prefer slow-moving streams, floodplains, and swamps located along the Amazon River Basin.  In aquariums, angelfish can thrive well in warm water that is a little acidic with little or no salinity.

The optimum temperature for angelfish is usually between 75-82°F. Similarly, they perform better at almost neutral pH [6.8-7]. Likewise, they like it when there is light penetration in their tanks. Consequently, they thrive better in clear water with shallow depths.

This preference is because angelfish will need up to 8-12 hours of light per day. The source of light can be directly from sunlight, but any other aquarium light that can mimic the ray from the sun will work just fine.

You can imitate the natural habitat of angelfish by using plants that are native to the Amazon River.

These plants include Amazon sword plants, Brazilian waterweed, and java moss. These plants can also provide a suitable hiding place for the fish to protect them and help them find rest.

If you intend to keep multiple angelfish together, you should have a large spacious tank.

The large tank will help each angelfish maintain their territory and reduce the rate at which they fight. On average, you will need at least 10 gallons to keep a single angelfish in the tank.

Therefore, you will need about 20 gallons if you are holding a pair together in the tank. The tank should also be big enough to accommodate the height of the angelfish.

Angelfish In Community Tanks. Who Are The Best Tank Mates?

Angelfish live together with several unique aquatic species in the wild. Amazon River Basin, which is their natural habitat, accommodates a lot of unique marine species. The Amazon River basin has a dominant number of freshwater fish, including

In aquarium tanks, angelfish can handle being in the same tank as

However, angelfish might not like to have non-fish companions around. They can even prey on crustaceans and invertebrates if they are kept together in the same tank.

Likewise, you should avoid keeping angelfish with more aggressive cichlids like Oscars, and Convicts.

Likewise, fin nippers like barbs should be nowhere close to the tank of angelfish because they can harass your angelfish and rip off their trailing tail.

Similarly, it would be best if you were careful while keeping multiple angelfish together.

It is better to house as a single species in the tank because they can from territories and hierarchy within their schools.

They would rather fight than forage together, and their competition for dominance can be very engaging.

Angelfish is reputable for being one of the most popular species of fish in the aquarium. They are semi-aggressive and can grow up to 10 inches over their lifespan of close to 10 years. It is great to imagine how beautiful and gracious the tank would be in the presence of multiple angelfish but is not as smooth as it appears.

Keeping multiple angelfish together can be challenging because of their temperamental and territorial nature. Even when they are in a school of about 5-6 in the tank, they still fight for hierarchy, and they often pair up in twos. Each pair can then be kept in a different aquarium tank.