This article contains everything about angelfish schooling behavior and if they need to be kept in groups.

Angelfish are social fish and love to live in groups. You will see them live in groups of 3 to 4 in the tank, having their own territory. Angelfish can display territorial behaviors during certain periods.

Angelfish are not schooling fish because they can live alone. They are generally social fish and love to stay in groups when kept in a tank or the same area. You can keep a number of angelfish in the same tank, and they will be fine, but you need to ensure you do not overcrowd them.

They can be territorial during feeding time or breeding seasons, where they will have to fight for food and mate. They often fight for space-defining who the boss is to themselves. Angelfish will live together in groups but will tend to fight each other rather than cooperate.

Fighting usually occurs with males, while females tend to be more peaceful. Angelfish are less territorial than other fish in the tank; they major their attention on fellow angelfish. Smaller angelfish tend to hide from the larger ones that act as bullies.

The males will fight each other until one becomes the dominant male while others back off. It is not as easy as it sounds; it is always a brutal act. In the quest of becoming the dominant male, the angelfish can get injured or even die.

What Schooling Fish Are Compatible with Angelfish

Corydoras catfish are peaceful fish that love to live in groups. Like angelfish, they are hardy and can tolerate a wide range of conditions, making them easy to take care of. They can also take care of the tank cleaning as they will romp and scour the bottom of the tank for uneaten food.

These fish are peaceful schooling fish and will make compatible tank mates for angelfish. They are schooling fish, so you need to keep them in groups of five or more. They are hardy and very easy to take care of, making them suitable for your angelfish.

Platies are one of the few livebearers that will be a compatible tank mate for angelfish. They are very peaceful and won’t cause trouble for your angelfish.

Angelfish can live alone without any problem. They will live happily in a tank all by themselves even though they are social fish. Their social behavior causes them to love to stay in groups.

Although they will live happily alone in the tank, they will prefer to live in groups. You should keep your angelfish in groups of 4 to 5 or more. You have to make sure you do not overcrowd the tank. 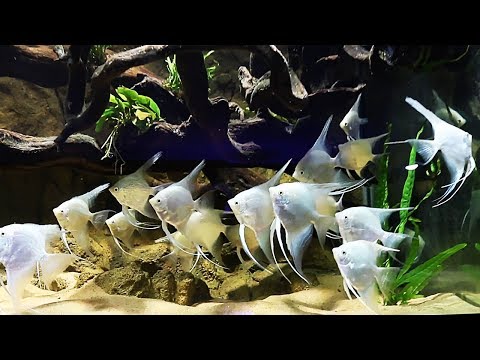 You also have to make sure you create a perfect balance between the males and females. Male angelfish are quite territorial and will fight over almost everything. You need to make sure there are not too many males in the tank.

You can have a male to 4 females in the tank. It means for every four females angelfish in the tank; you will have a male. It will reduce the level of aggression and territorial behaviors in the tank.

How Many Angelfish Should You Have in Your Tank

If you have a 20-gallon tank, you should not keep more than 3 to 4 angelfish in the tank. Keeping more than this number will cause overcrowding in the tank. It can also cause further complications for your angelfish.

Angelfish are not schooling fish. They are only social fish that love to stay in groups. They can stay together with several compatible tank mates and live peacefully with them.