Are your Endlers constantly dying? Have you maintained healthy water parameters, but you still can’t keep them alive? In this article, we’ll discuss why Endler’s livebearers die.

Why Are My Endlers Dying? Endlers may have already arrived sick or treated with strong medication. Females die from getting harrassed by males who wish to breed. Dominant females stress weaker females. Sometimes they are eaten or sucked into the filter. Were My Endlers Sick Before I Got Them?

Most endlers are mass produced by the hundreds or thousands. They are usually packed into bags that are not large enough to hold their true number. This creates massive amounts of stress before you see them at the local fish shop.

It’s common for these smaller poecilia wingei, hybridized guppies or common endler’s livebearers to face diseases and be treated with medications including antibiotics before you bring them home. Poor handling and mass breeding causes many of these fish to die too soon.

How Did My Endlers Die?

Your endlers could have lived a life too short for a number of reasons. The following is a list of possibilities that caused the death of your endlers:

It’s unclear how every batch of endlers are bred. They are livebearers with enormous amounts of fry. Mass production leads to poor habits of breeding and transporting.

The medication or antibiotics they receive could ruin or crash your tank’s nitrogen cycle. At this point, they may have weakened your community fish in the same tank indirectly. It’s always best to quarantine endlers first, but at this point, your tank may need to be cycled again.

Sometimes these small fish get sucked into the filter. It’s best to cover it with panty hose, a sponge and rubber bands. It may not look pretty, but it will prevent your endlers from getting sucked in.

Endlers prefer plenty of plants to hide in. Plants dissolve more oxygen and provides shelter. The comfort from plants helps them with refuge from tankmates and allows them to find ample space for their fry.

The following plants are suitable with Endler’s livebearers:

Nano sized fish like tetras or peaceful catfish will make for suitable tankmates for your endlers. If a fish can open its mouth wide enough to fit an endler, it may end up being dinner. The following tankmates have worked well for many fishkeepers with endlers: 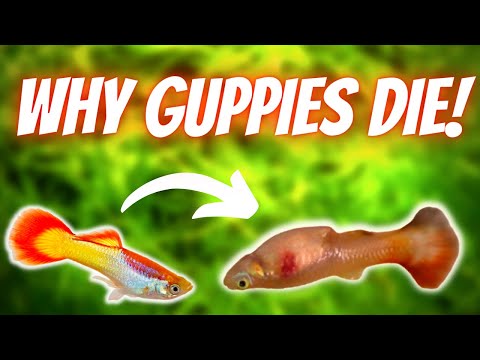 Why Did My Endlers Disappear?

Your endlers are small enough to not be noticed. A stressed endler will hide and eventually become weakened to the point of death. The following situations may have occurred:

Endlers can jump well, despite being small. They are nimble and will try to make an escape attempt if they feel adventurous or stressed enough. Always place a lid or cover slides on top of the tank when you are caring for endlers.

Filters should be covered with a mesh or sponge. You can make a cover on your own with panty hose and a rubber band. The substrate contains lots of mysteries from leftover debris to carcasses of fish that are too small to notice sometimes. If your endlers don’t come out of hiding, it’s safe to assume that they won’t make it.

How Can I Keep My Endlers Alive?

Sometimes there is nothing you can do if you received a bad batch of diseased endlers. Always quarantine them in a separate tank before introducing them to your main tank. Look for curved spines, discoloration or lack of appetite.

Columnaris is also a common bacterial infection that guppies and endlers can carry into our tanks. Antibiotics are the best course of treatment, but keep these strong medications out of the main tank or it may crash your nitrogen cycle. Why Are My Female Endlers Dying?

Females should outnumber the males or else they will get harassed often. Female endlers stay together in very large groups in the wild.

Females establish a hierarchy amongst themselves. This pecking order helps them determine who is most dominant to stop any fights from arising. The lower the female is in the pecking order, the higher the likelihood that she will be stressed or weakened.

Males will also put lots of stress on females with their constant urge to breed. The more they push, the sicker, weaker and stressed the females become. Try to stock 10 females to 1 male or separate the sexes into two different tanks.

Endlers are hardy fish once they get acclimated in a spacious and comfortable tank with lots of plants and spaces to hide. Too many bacterial infections, intestinal issues and heavy doses of medication before they arrive to your home causes the early death of endlers.

Try to stock more females than males and don’t be too stressed by their loss. It’s common at first, but you may be able to come with a solution that works for your endlers and your tank.

Thank you for stopping by at HelpUsFish.com for all your informational needs concerning the fish you wish to keep in your aquarium. We have plenty of articles on a wide variety of marine life that may also pique your interest. See you again soon!