Are Endlers Aggressive Fish? No. Endlers tend to be peaceful, but active fish. They establish hierarchies in their groups and chase during mating. Males also chase males and females chase females. Offering plenty of hiding spaces and increasing their numbers helps to limit bullying.

Male endlers are persistent in their nonstop quest for mating. They harass females by chasing them around. Females are larger, but they get stressed by this persistence. Limit this form of aggression by adding more females to males with a ratio of 3:1 or more.

Males may nip the fins of tankmates in boisterous play or the attempt of mating with any other similar sized species. Females form groups with the most dominant directing the aggression at a weaker female endlers.

Females tend to be more aggressive with territory protection. This usually happens when they are looking for the right spot to give birth.

How Do I Know If My Endler Is Too Aggressive?

Endlers chase each other to establish their pecking order and the right to mate. Females do the same to other females as well to exert dominance. This behavior shouldn’t go overboard.

If you notice the common symptoms below of bullied endlers or other tankmates, it’s time to step in:

Check to see if they’re active and still eating. If you find the fish that your endler was chasing around and it looks weak, dull, sluggish or pale, then find the aggressor. No fish should cause another to become stressed, ill or end up with damaged fin that may rot.

It’s best to remove the aggressor at this point. You may exchange, return or rehome this bully to give your weaker endler or tankmate a better chance to regain strength and hardiness. 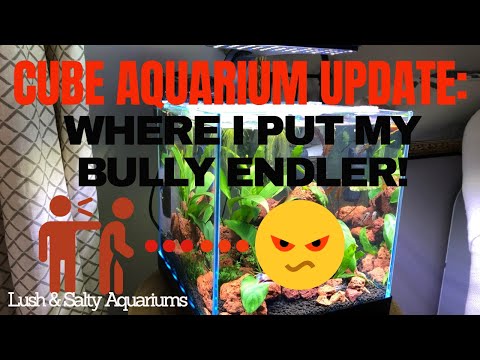 How Do I Stop My Endlers From Being Aggressive?

There are cases where people keep 3 male endlers together. Two may gang up and bully the other. The weakened victim may surf the glass by swimming up and down frantically trying to get away from these aggressors.

Do we blame the other two males or the conditions they are kept in? Give your weaker male the chance to fit in with more endlers instead of facing these two males each day. Take the following seven precautions:

You can keep 1.5 endlers for every one gallon of water. Instead of 3 endler males in a 5 gallon tank for example, add up to 7 males. They may establish a pecking order at first, but a larger group of them will keep things focused on active swimming and eating if there are no females.

If you have the same number of females and males, the aggression will rage on from sexual urges demonstrated by the males. Add 3 females to every male or even more than that to limit this type of harassment towards a smaller group of females.

A tank without any possibility of mating or breeding eliminates the aggression that comes from it. 3 may not be enough. One male could work in a community tank or on its own, but endlers would like to shoal together when they feel threatened or stressed.

Endlers have healthy appetites for multiple small meals per day. They will get distracted from aggression over dominance by focusing instead on brine shrimp, larvae or any other type of frozen, live or packaged food.

This is the most common answer to the issue of aggression in endlers. Add lots of heavily planted areas. Make the tank a thick jungle if the aggression is happening by more than a few endlers.

If you can’t find one main aggressor and remove the bully, then make it really easy for all of your fish to hide and take more breaks from each other.

Spiking levels of ammonia causes marine life to do erratic things like darting around or becoming aggressive. Check nitrites, nitrates, pH, hardness and all the usuals to eliminate the possibility that the water quality is causing the aggression you’re seeing.

Warmer waters increases metabolic function. Your endlers will slow down a bit if they are too active when you make things cooler. Adjust the temperature very slowly. Go for 1 degree cooler per hour or longer. Get to about 72°F and see if this calms the aggression.

Male endlers do not exhibit territorial behavior as much as females do. Males are not given the task of protecting the fry. He has no parental responsibilities. Endlers like to be active and use up the entire tank space to swim or hide behind plants and decorations.

Females will get territorial when they are trying to give birth in a spot that other fish are trying to invade. She may chase them away or nip at them to deliver her fry in peace.

Endlers and generally friendly and peaceful. They will keep to themselves and shoal together when necessary. They are not schooling fish because they don’t swim together in similar patterns at the same time.

The males think about mating almost all the time. They will get aggressive to show the other males who has the most right to mate. If there are no females, they tend to be peaceful in groups of 6 or more.

If there are only three or 5, they may gang up on 1 or 2 weaker endlers. Females could get dominant over each other as well and territorial when they’ve chosen a spot to give birth.

Please enjoy your endlers and remove aggressors as you see fit. Thanks for your time and we hope to see you again soon for another article at HelpUsFish.com.