Are you noticing your Endlers turning from female to male? How is this possible or is it a myth? In this article, we’ll find out if Endlers can change gender.

How Do I Tell If My Endlers Are Male or Female?

The female endler’s livebearer is larger and more pale in color. A male is smaller and more colorful. There is much more to it that that. Look closer.

Females have a gravid spot that is dark and near their vent. Waiting for a male to change color and show its true vibrancy may take weeks or months.

Why Do Male Endlers Take So Long To Show Their Colors?

Some fishkeepers with endlers profess to waiting up to a year to notice a color change to identify them as males. Usually it takes weeks or 3-6 months for this become noticeable.

The delay is usually a defense mechanism. Larger males will try to pick off younger males or show them who is boss. The hierarchical order is present in both males and females.

This pecking order establishes the right to breed with females. Younger males hide out disguised as females until they are large enough to establish their place in the pecking order.

Is A Male Endler Changing Its Sex Into A Female?

You can research this topic and come across opposing views. We tend to believe that males are trying to go unnoticed by larger male bullies in the tank. They are in a process of pseudo gender identification. They possess the look, coloration and behavior of females.

They suppress their male colors and fin growth until they feel it’s safe. At a young developmental stage, the stronger males can stress out younger male endlers causing them to to die before they get a chance to mature. This adaptation to withhold their obvious signs of gender identification helps them survive. 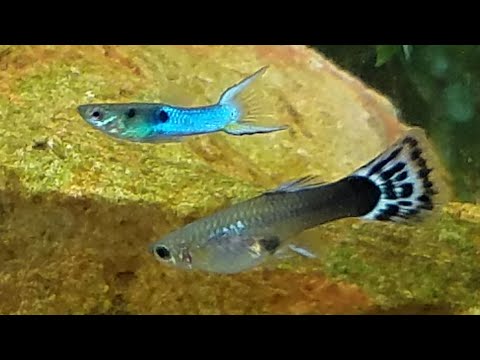 Is There Such Thing As A Hermaphrodite Endler?

There are rare instances of female endlers possessing male coloration with no gravid spot. They are unable to spawn. It’s unclear if they are undergoing a sex change. This is not something endlers really do.

The problem lies with excessive inbreeding, mass production and hybridization of endlers with guppies. Strange things happen. We as fishkeepers try to make sense of it without having enough scientific trials and studies to back up our claims.

Do Endlers Change Their Sex?

Without undeniable proof, we will side with popular consensus saying that endlers don’t change their sex. They are simply late developing males. Young livebearers look very similar to each other.

This is the best tell-tale sign that you have a male masquerading as a female until he’s mature and able to find his position in the hierarchical order of male endlers.

Are My Endlers Pure Bred?

More often than not, endlers are hybrid guppies. If you try to breed them with a female that has a black bar for example, you will notice the hybrid male’s dominant genes taking over. If she spawns more females, they will most likely not have the black bar.

Most endlers in fish shops are hybrids. You will have to go to a selective breeder or a specialist in breeding endlers if you want to track down a pure Endler’s Livebearer.

How Do I Keep Male and Female Endlers Together?

Most endlers turn out to be female. Females should outnumber the males or they will get chased and harassed. Males will determine their pecking order and their urge to breed with females will cause stress.

3 to 1 females to males is the minimum suggested ratio but we believe it’s better to have 10 females to 1 male if you plan on keeping a large group of them. Your males will develop colors on the sides of their bodies in a few weeks to a few months. Dark patches will suddenly expose neon colors.

If you remove the largest or most aggressive males, the smaller females that you thought were female will turn into males faster. They were males all along, but they didn’t show their colors out of defense. Once the larger males are gone, the threat is non-existent and they can truly take on their gender identity . Why Is My Female Endler Not Spawning?

Your female endler is probably not a female. Males hide as females when they are younger to prevent getting bullied by larger males.

Some females (who are actually female) may not have any offspring out of stress. They may get harassed or chased too often by males and start to hide or give up any possibility of mating.

Sometimes dominant female endlers will prevent weaker females from breeding by chasing them away or isolating them. Poor water quality, abnormal temperatures and a weakened immune system may also cause them to not spawn.

Thanks for visiting HelpUsFish.com and we hope to see you again for another article on Endler’s Livebearers or any other marine life that interests you.