Do you have betta fish in your tank or pond? Do you notice your betta fish flaring?

Is the flaring a sign of troubles, or are they just displaying their colors?

You have everything you need to know about betta fish flaring in this article.

The threat can either be their:

Allow me to explain below.

Why Is My Betta Fish Flaring?

They can feel threatened with the presence of:

When bettas flare their gills they want to get rid of the intruder as soon as they can. Your betta fish can also flare when humans pass by their tank or pond, especially when they are not familiar with humans.

In the wild, betta fish will flare their gills, and one will eventually back off, leaving the other to its territory. At times, there can be a fight to declare the befitting owner of the territory

The loser leaves the site when it is obvious the fight is lost. They can even avoid the fight when they see they cannot win against the puffed-u opponent.

It is why it isn’t advisable to keep male betta fish in the same tank. Flaring can be stressful to your betta fish. When you notice your betta flaring, you should observe and eliminate the threat. 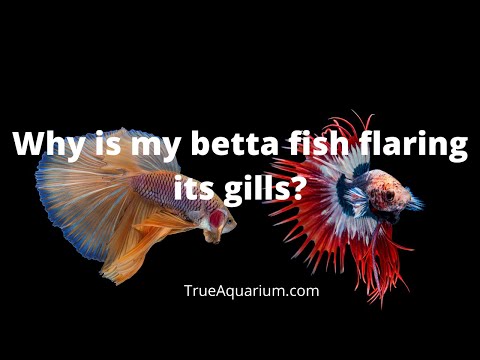 What Do I Do If My Betta Flares at Me?

Once the fish recognizes you and feels safe around you, it will stop flaring its gills. It will even feel happy and swim around happily when it sees you. Betta fish can also flare its gills for several other reasons, and you have to know what to do.

When your betta fish flares, it might have something threatening in its tank or pond. When you notice the flaring behavior, you have to attend to the fish. If the fish is flaring at an intruder, you will need to remove the intruder from the tank.

The intruder can be a tankmate or another betta fish. You will have to make sure the betta fish and the intruder do not have to cross paths. Your betta fish can also flare when it sees its reflection.

Betta fish flaring at you occurs mostly when you newly introduced it to the tank or your home. You will seem like a threat causing the fish to flare its gills when you come around. This flaring act will continue for a while until the fish starts to understand you are not a threat to it. Is Flaring Good for My Betta Fish?

Flaring can be a good behavior for betta fish, but a continuous and prolonged exhibition of this behavior can stress your fish. One of the reasons betta flare is to display dominance and intimidate other fish. When it does this for a little while every day, it is good.

When their immune system gets weakened:

As much as flaring can be good, your betta fish should not do it for a long time.

Is Flaring Bad for My Betta?

Flaring can be very stressful to your betta fish, and too much of it can be harmful to them. Your betta fish will flare for several reasons, of which some are good. But, when the flaring starts occurring for a longer time, your betta might be in serious trouble.

If your betta does not stop flaring its gills, the act will:

Flaring is bad for your fish when it occurs for a longer time. It takes energy for betta fish to flare their gills, causing them to be weakened after the act. Ensure you find a way to stop your betta fish from flaring its gills for its safety and good health.

How Do I Stop My Betta from Flaring?

If your betta fish is proving dominance and intimidating other fish in the tank, you have little to do as it is a natural behavior. It is because the flaring act will only last for a little while, and the fish is back to its normal shape. You will only have to attend to them if the flaring lasts longer than expected.

Your betta fish will also flare when flirting with the female bettas in the tank. You can also not help this flaring act as it is doing it to win the girls’ hearts. Sometimes, your betta fish will flare only to stretch themselves and not due to aggressiveness.

Male bettas tend to be more aggressive as they show dominance and territorialism alongside their gills’ flaring. Unlike males, female bettas are less aggressive and will not display much dominance or aggressiveness.

They are not very aggressive and will do well together in the same tank. You can keep several females as long as the tank can accommodate them.

Can Betta Fish Die from Flaring?

Flaring might not kill your betta fish but can make it sick. Flaring for a long time will cause your fish to become exhausted, tired, and stressed, putting a strain on its wellbeing. Your betta fish’s immune system can also become weakened, making your fish prone to diseases and infections.

Most times, flaring cannot cause the death of your fish. It might only cause it to develop health complications. Flaring is normal for betta fish until the flare duration becomes longer than expected.

What Causes Stress in a Betta Fish?

Betta fish will experience stress under several conditions such as:

Stress can lead to illness and lack of appetite or lethargy. It’s best to make adjustments by going through the list above and checking through each possible cause.

Betta fish flaring is a natural behavior. They will flare to exert dominance and intimidate other fish with their size. Betta fish flare is not a big deal until it becomes prolonged for several reasons that need your immediate attention.