Are you wondering if Bala sharks actually have teeth? Will they aggressively try to bite other tankmates? In this article, we will explore the topic of Bala sharks and whether or not they have teeth.

Do Bala Sharks Have Teeth? Bala sharks don’t have teeth in the conventional sense. They do not bite their foes. Their mouths open up and suck food in. They are similar to sucker fish in this way. No. Bala sharks are not aggressive biting fish. They prefer to keep to themselves and graze on plants and algae or occasional critters and crustaceans.

If they can fit another tankmate fully into their mouths and suck them in, they will ingest them. This is rare however, because you will mostly find Bala sharks ignoring their tankmates.

Are Bala Sharks Aggressive on Their Own?

A Bala shark that is kept alone is going to retreat, hide and feel stress. This is largely due to the fact that they are shoaling fish that prefer to be kept in groups of 4 or more.

A Bala shark will prefer to ignore other fish and zoom around the tank covering all of the spaces within it.

Bala sharks like to dart around and charge at each other, but this type of minimal aggression does not lead to any type of major attack or biting.

The information available online tends to focus more on regular sharks. You may find incorrect information regarding Bala shark teeth.

Although Bala sharks look like they are pecking each other or food that is presented to them, they do not have teeth.

Bala sharks don’t have plated mouths as well. They prefer to siphon in food the same way a sucker fish would.

A simple search online would lead to misleading conclusions about Bala shark teeth. The teeth belong to other sharks and simply do not exist inside the mouths of Bala sharks. 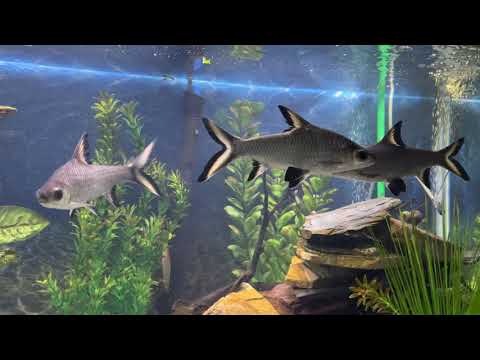 What Do Bala Sharks Eat?

Bala sharks are opportunistic feeders that will eat anything that they can fit into their mouths.

They are omnivores but prefer to suck food in since they don’t have teeth. You may notice a Bala shark eating:

Even though they are not picky eaters, a varied diet helps to ensure a healthy Bala shark lifespan of about 10 years,

Do Bala Sharks Eat Other Fish?

While Bala sharks are not known to eat other fish due to their peaceful nature, they can take an opportunity when it presents itself to ingest a smaller tankmate fully.

Juvenile Bala sharks are much safer to keep with smaller community fish, but we cannot guarantee the same for adult sized Bala sharks when a sleek little fish such as a neon tetra gets in the way.

It might be one gulp and done for this little swimmer who ended up right in front of a Bala shark’s mouth and got sucked in.

How Big Do Bala Sharks Get?

Bala sharks can grow anywhere up to 12 to 15 inches. They end up outgrowing any average size tank in most people’s homes.

This is largely due to the fact that they must be kept in groups of 4 or more. At this point, you’re going to need a 150 gallon tank or larger to make sure there’s enough space for these darting fish who love to take up the entire space.

With the right care, you’ll be able to keep your Bala sharks healthy for up to 10 years.

Will My Bala Shark Bite Me?

No. Your Bala shark will not bite you because it doesn’t have teeth in its mouth. One Bala shark alone is going to be a problem however, because it will become very shy and stressed. You must keep them in groups of 4 or more.

Bala sharks look to jump out of tanks that aren’t secured with a tight lid. A stressed Bala shark could swim erratically and end up getting hurt by bumping into the tank walls. How Long Does It Take for a Bala Shark to Reach Full Size?

Bala sharks grow quickly. With enough quality food and daily feedings of up to three times a day, your Bala shark could grow up to 4 inches in as little as 1 month.

In six months time you may notice a growth between 2 to 8 inches. A juvenile Bala shark will become a fully grown adult in about a year.

The average size would be somewhere around 12 inches but it could grow as much as 15 inches.

It’s simply a misconception to believe that Bala sharks have teeth and they can be using them to bite you or other fish in your aquarium.

A Bala shark could open its mouth wide enough to ingest anything that it can fit into it whole. This method of ingesting food is more like sucking it in like a siphon much like sucker fish.

A Bala shark would be more likely to be shy and timid in a stressful state rather than trying to aggressively attack any other tankmate.

Thank you for visiting HelpUsFish.com for all your information on needs regarding Bala sharks and any other type of aquatic life that we love to keep in our tanks.

Please use our search option to find multiple articles concerning the types of fish, crustaceans and invertebrates that you like to keep in your aquarium. Goodbye for now!