Can you imagine an aggressive shark in your mind.  Do you think Bala sharks will carry the same tendencies as the sharks you are imagining? In this article, we should get right into the topic of whether or not Bala sharks are aggressive.

Are Bala Sharks Aggressive? Bala sharks are generally peaceful and timid. A small tank, overcrowding, aggressive tankmates and illness could lead to erratic or aggressive behavior. Small fish and invertebrates can easily be consumed by Bala sharks due to their large size, but they shouldn’t be classified as aggressive. If you create a spacious and peaceful environment for your Bala sharks, there is a great likelihood they will be friendly and comfortable. Bala sharks are known as the gentle giants of the South East Asian river systems in and around Borneo.

They can get shy, timid, nervous or stressed in a new tank. Bala sharks display an active nature with the ability to swim fast or attempt to jump out of tanks. A tank lid is strongly advised.

Bala sharks may eat smaller aquatic life in your tank if they can fit them into their mouths. If you keep Bala sharks in a school of 3 or more, they should remain friendly and safer in numbers.

Why Is My Bala Shark Aggressive?

We like to feel that no two fish are the same. Aquatic life can display multiple behaviors or personalities that we become very astute at observing. If your Bala shark is aggressive, there are ways to step in and help.

Here are our top 5 suggestions to ease the aggression.

One Bala shark will get lonely, skittish and may hide excessively. 2 Bala sharks may see one becoming aggressive with another to exert dominance.  3 or more Bala sharks will school together, feel secure and they will all be far less aggressive.

You can consider a 30 gallon tank for one Bala shark, but loneliness and stress will most likely be the outcome. Many hobbyists who care for Bala sharks encourage a tank size of 150 gallons or larger to keep them all swimming comfortably. This will increase the likelihood for Bala sharks to thrive peacefully.

Bala sharks will try to eat anything they can fit into their mouths. They are fast and may grow up to 12-14 inches. Shrimp and snails along with smaller fish like neon tetras should be avoided.

Increase feedings to reduce the chances of hungry Bala sharks feeling stressed enough to become aggressive. Vary their diet and keep in mind that the more they swim around in their large tank, the more they will need to replenish nutrients.

Erratic swimming is associated as a symptomatic reaction to parasitic, viral or bacterial illnesses. Once inflicted, your Bala shark may swim faster than usual or dart around in abnormal ways. Treating your Bala shark is top priority, but treatment begins with checking your water quality first. 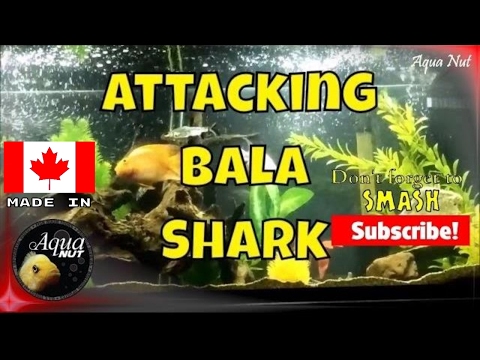 While we may regard Bala sharks as being mostly peaceful by keeping to themselves in groups of 3 or more, they can still get aggressive if need be.

If there are similar sized or larger tankmates in their way, a Bala shark may not retreat, but are not known to instigate. If a Bala shark is stressed due to overcrowding, it may wish to dart around, jump out or bite back at any nearby neighbors limiting its space.

Stunting their growth in a tighter tank may stop their bodies from growing, but their organs may expand tightly inside them. This is not usually the case, but a Bala shark under stress or illness may also exemplify some aggressive tendencies.

Will Bala Sharks Eat Other Fish?

Bala sharks can definitely gobble up smaller fish with a smooth texture. They can also consume tougher shells of snails or shrimp. They are continuously on the move and their large eyes are on the lookout for more meal options.

Bala sharks will get along with plenty of similar sized fish larger than what their mouths can fit. Aggressive cichlids or Oscar fish could try to instigate bouts with Bala sharks.

It’s best to keep suitable tankmates to match their water parameters and overall peaceful temperament. If you keep Bala sharks in groups 3-6, you will be able to keep them safer and prevent the chances of outside aggression.

Fish and Invertebrates To Avoid: What Other Fish Can Live With Bala Sharks?

The best possible fish to keep with a Bala shark is another two or three more Bala sharks. A species specific tank would work well for these fish who would gladly consume smaller tankmates they can fit into their mouths.

Larger tankmates who are also peaceful, will be suitable for keeping with Bala sharks in a large tank to swim and mostly avoid each other.

Our Favorite Tankmates For Bala Sharks:

It’s fair to say that although Bala sharks can display aggressive behavior if the situation calls for it, they should not be considered aggressive. Keep them together in a school of 3-6 to feel safer in numbers.

If you can’t house them in a tank over 100 gallons, you may run the difficulty of managing any stress from stunting their growth to increasing aggression.

Bala sharks would be an excellent choice as sole members of a species specific tank all to themselves. We discourage bite-sized fish or invertebrates that you enjoy keeping to share the same space as Bala sharks.

Thank you for stopping by at HelpUsFish.com. We have plenty of articles on a wide variety of aquatic life that may also pique your interest. See you again soon!