Most species of fish, particularly those kept in the aquarium have behavioral ways of expressing how they feel.

In this article, we will discover why have my guppy eyes turned black?

Why Have My Guppy Eyes Turned Black?

The reason your guppies have developed black eyes is to warn off rivals, it is an obvious sign of aggression before attacking anything they presume to be a threat to them.

You might be wondering why the eyes of your guppies have gone black. There is no cause for alarm. Do All Guppies Have Black Eyes?

Larger guppies often show this sign to smaller guppies as well. Smaller guppies usually don’t retaliate this gesture because they feel they wouldn’t stand a chance should the larger guppy attack them.

The black eyes developed by guppies are an obvious sign of aggression in response to a threat or in getting ready to attack an actual or potential threat.

Guppies are characterized by:

Guppies exhibit many colours and varying body size which make them stand out among other aquarium fishes. The wild-type female guppies have grey body colour while the male has splashes or stripes mostly of bright colours. 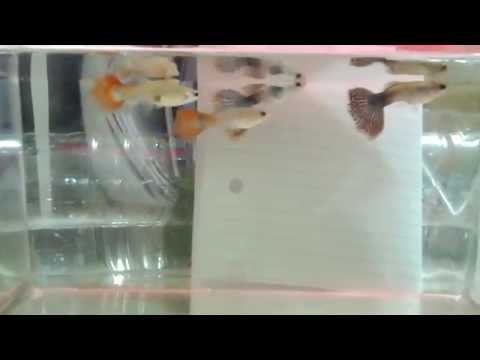 The sizes of guppies vary and can often be linked with the sexes. Guppies also exhibit sexual dimorphism. The females generally have larger bodies than males, but the males have brighter colours.

Guppies are generally known to be peaceful species of fish. They often get along peacefully with a wide variety of fishes found in the aquarium or even in the wild. They usually have a hard time coping with aggressive members in the same environment.  Although individual guppy can possess varying behaviour often referred to as personality.

Male guppies can, however, be aggressive when it comes to their mating with females.

Male guppies are mostly seen to chase females, either trying to impress them by wiggling their fins or aggressively mating with them.

They are live bearers and have a gestation period of 21-30 days.

Why Do Guppies Hide?

Guppies are sometimes seen to hide either at the top of the tank, under pebbles or at the corner of the tank. They might be hiding due to several reasons, especially if they are stressed or ill.

Eyes are known to be one of the most recognized and noticeable parts of the body in the natural world. A lot of animal species including guppies use their eyes to convey behavioral messages and send an obvious signal to members around.