Generally, guppies like other fishes breathe by taking water through their mouth and releasing it through their gills. They filter oxygen from water with a part of the gills called rake, which is similar to the lungs.

Why Are My Guppies Gills Red?

Red gills on guppies is caused by high levels of ammonia, nitrate or carbonate poisoning. It will also cause the gills to become swollen, making the guppy gasp for air at the water surface.

Although the gills are usually reddish because they are engorged with blood, an intense red colouration can mean something else. NOTE : If your guppies gills are red you need to test the water conditions with an aquarium water testing kit (Available on Amazon) to see if there are any issues that need to be addressed

The gills are the sensitive organ that performs a very vital function in guppies and other fishes. However, it becomes a very big course of concern when the gills become red than they usually are.

Ammonia and carbonates are highly dangerous toxins at high concentrations. It could find its way into the aquarium from decomposing fish food, chemicals used in water treatment, organic matters and food waste.  Carbonates can as well be found in different rocks and substrates that might serve as pebbles in the aquarium. 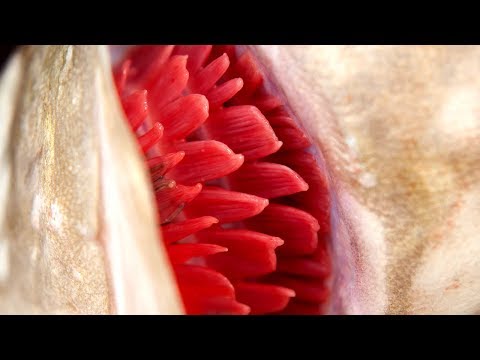 What Color Should Guppy Fish Gills Be?

A healthy guppy fish gills are naturally a pinkish red color, They should not look a brown or silver color as this will indicate there is some sort of infection in the fish.

As the fish gets older the gills will get slightly lighter and also dryer and covered with sticky slime.

Symptoms Of Ammonia Poisoning In Fish

It is not a very common scenario for the ammonium level to increase suddenly. It is usually as a result of a repeated build up over a certain period. Ammonium might not be very harmful at first but develops into a very dangerous toxin at high concentrations. Ammonia poisoning starts when the tank’s pH levels become elevated, and consequently upsetting the nitrogen cycle.

The first obvious sign of ammonium poisoning is the guppy gasping for breath at the surface of the water. The gills will then develop a red or lilac colouration, making it appear like they are bleeding. The bodily function will begin to fail, making them lose appetite and becomes increasingly lethargic.

In some cases, affected guppy can be seen to isolate itself. After extreme damage, the brain, organs and central nervous system become faulty. The guppy will start to haemorrhage both internally and externally, before eventually dying off.

Prevention And Treatment Of Ammonia poisoning

Once any sign of ammonia poisoning is noticed, the first thing to do is to check out for the ammonia level in the tank. If the ammonia level is above 1ppm on the standard test kit, begin treatment and tank clean up immediately. Also, reduction in the pH of the water and a 50% will have an instant effect that will be of great relief to the guppies.

If the damage is already intense, you can make use of a chemical pH control product to neutralize the effect. All through this period, make sure no new fish is added to the tank. However, ammonia build up in the aquarium tank can be avoided in the first place by taking certain simple precautionary steps.

Make sure you feed fish in small quantities and remove food not consumed in 5 minutes. Make sure the aquarium is always kept clean and remove dead plants and debris. Change a percentage of the water regularly and test the ammonia level in the tank at least twice in a month.

Having slightly red gills can be normal for guppies, but when the red becomes intense it might mean something more. Pay attention to the pH, ammonia and carbonate level of the water once you discover the gills of your guppies are red.